The Initial Public Offer (IPO) market has been abuzz over the last 2 years. While IPOs helped raise nearly $2 billion in the fiscal year 2016-17, the fiscal year 2017-18 is likely to see well over $5 billion raised through the IPO markets. When we talk about IPOs we normally use the terms IPO, FPO and OFS quite interchangeably. While all these 3 products refer to the primary markets, there is a subtle difference between the three of them. Let us look at this difference…

When a company that has never issued shares to the public, does it for the first time it is called an Initial Public Offer. Normally, an IPO is a mechanism for an unlisted company to raise fresh funds from the primary market and also list the stock in the stock exchange. Apart from the fact that an IPO enables an unlisted company to raise funds, the IPO also gives greater visibility to the company. The company gets a valuation in the market and hence is able to use its equity shares as currency. An IPO necessarily leads to expansion of the capital of the company. The shares so issued will have a par value (face value) and are normally issued at a premium to the par value. 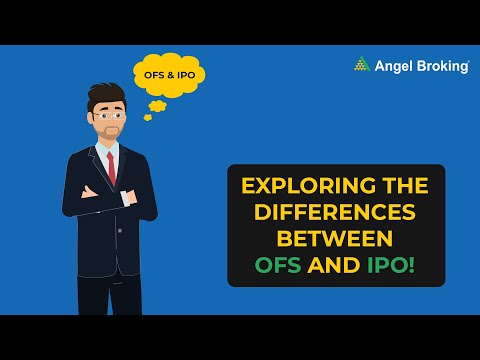 A slight variant of the IPO is the follow-on public offer (FPO). Unlike the IPO which helps the company to list on the stock exchange, a company that is already listed can raise additional capital through a follow-on public offer. Listed companies have the option of raising funds for their expansion needs through equity or through debt. In case of equity, it is possible through a rights issue to existing shareholders or through a FPO to new shareholders to expand the shareholder base. An FPO also results in expansion of the capital base of the company and dilution of EPS. The only difference from an IPO is that an FPO is brought out by a company which is already listed.

But, what exactly is an OFS? An offer-for-sale is different from an IPO and an FPO in the sense that an OFS does not result in fresh raising of funds. In an OFS, an existing shareholder dilutes their stake through the primary market. An OFS only results in a transfer of ownership from one shareholder to another and does not increase the share capital of the company. Some companies combine their IPO with OFS to give partial exit to promoters and to private equity (PE) investors. The issue of Narayana Hrudayalaya launched 2 years was one of the examples of an IPO and an OFS combined.

How are the 3 products procedurally different?

The key point to remember here is that an IPO and an FPO are EPS dilutive whereas an OFS is not EPS dilutive. The most important contribution of IPOs, FPOs and OFS is that it ensures a consistent supply of quality paper coming into the market and this ensures that equity markets do not run the risk of too much liquidity chasing limited quality paper.