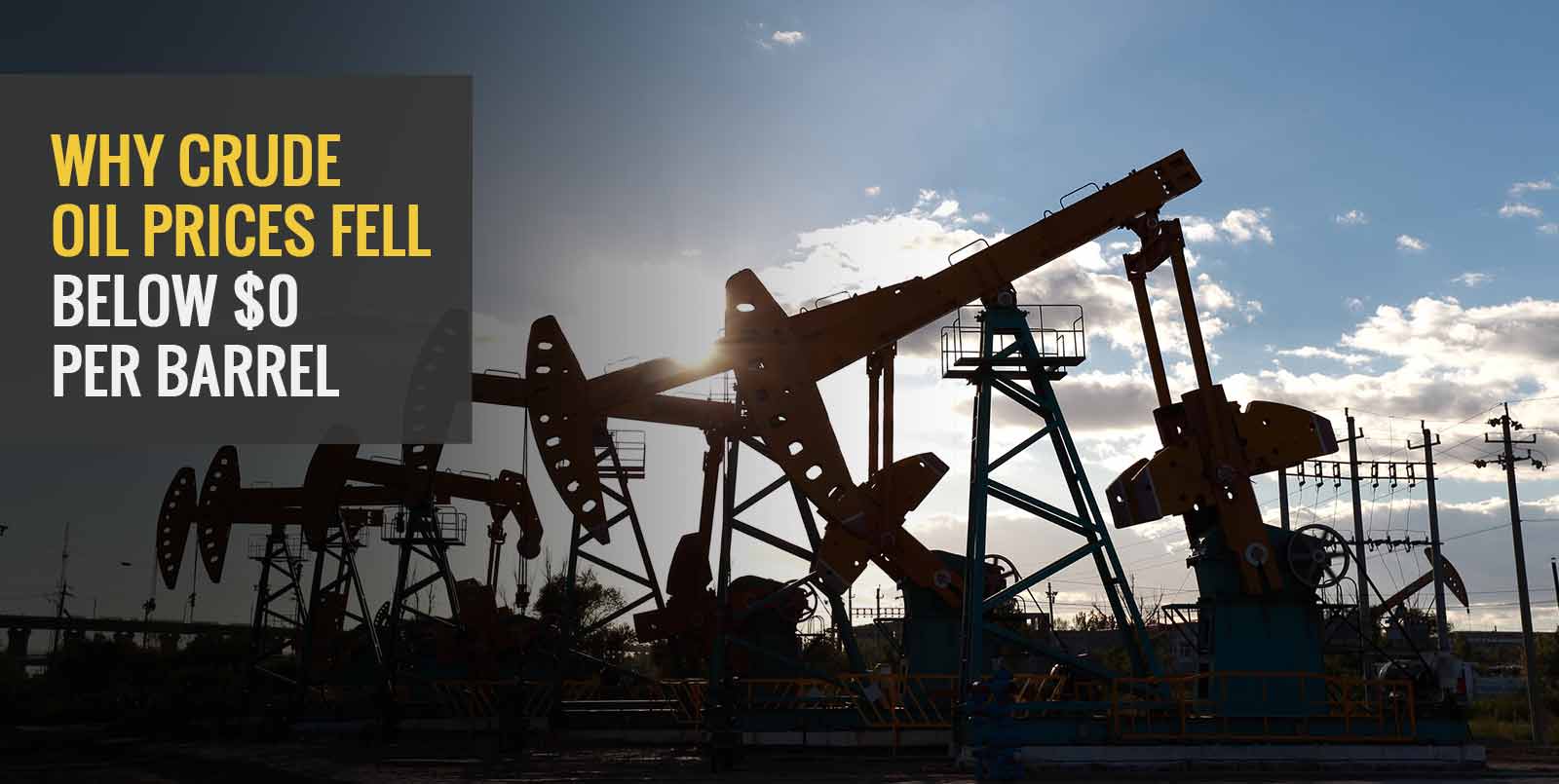 The day of April 20th, 2020, will go down in history books as one of the most unprecedented events in the world of finance as the future contract of WTI Crude settled in negative for the first time at -$37.63 per barrel and recording a decline of 305.97%. That means people were ready to pay to take the oil out of their hands.

This event sent shock waves across the global financial markets. To understand why and how the price of oil went into negative territory, we need to understand what these benchmarks and futures contracts are.

What are future contracts?

A futures contract is a financial instrument through which a person can bet on the price of a commodity on a future delivery date. A buyer and a seller agree to trade a commodity on a specific date and at a certain price.

So, when a person buys a futures contract on oil, that person agrees to buy a certain quantity and quality of oil at a decided date and price, which are mentioned in the future agreement and vice-versa for selling a futures contract.

What are oil benchmarks?

Different types of oil are traded by barrels in their marketplaces. But, two future contracts serve as a significant benchmark for crude oil prices around the world.

West Texas Intermediate (WTI) trades a specific oil grade in Cushing, Oklahoma, that serves as a domestic benchmark for oil in the US markets.

Crudes worldwide are priced off of and are negotiated based on these benchmarks as they are well known and have a long track record.

Oil and the economy

Oil prices have been historically indicative of economic growth and development on a macro level for the global economy. They have an asymmetric curve as the world is still mainly dependent on oil for industrial operations and transportation.

Since we are talking about WTI, let us have a look at the US economy’s dependence on oil:

Petroleum has been America’s largest source of energy since surpassing coal in 1950 with 18.12 million barrels consumed a day, and it alone accounts for 35% of the total energy that the country uses. It also contributes to around 8% of GDP and supports over 10 million jobs.

According to Derrick Morgan, Senior VP of American Fuel & Petrochemical Manufacturers, oil forms 90% of the energy used in transportation in the US, and it is expected to stay that way for a long period.

How did oil prices turn negative?

Oil prices, like any other commodity, are determined based on demand and supply in the market. An increase in demand will lead to an increase in prices provided that supply stays the same and if supply suddenly increases, the price will go down given that the demand stays the same.

While oil demand is a function of economic activity in a country, supply is determined by the producers who have control over the production and output. Historically, the Organization of Petroleum Exporting Countries (OPEC) has played a crucial role in determining the global supply.

Oil prices have been under pressure since January 2020 while China battled the spread of COVID-19. As the pandemic spread across the world, demand for oil took a devastating hit as most of the industries and virtually all transport were shut down due to strict lockdowns implemented in every country to curb the spread of the virus.

In March 2020, a price war erupted between Saudi Arabia and Russia after OPEC and its allies failed to reach an agreement on supply cuts. As a result, the price of WTI and Brent crude fell by almost 25% on March 10th, 2020.

The supply remained steady while demand declined at a record pace leading to a shortage of storage space available with the suppliers. The storage space at Cushing was almost full, and the remaining capacity was committed as the price started trading near negative values, and delivery dates came near. The situation was concerning, especially for Cushing, as it plays the main role in pricing the WTI contracts.

As the delivery dates approached near and investors realized that they had nowhere to put the oil, and hence, they soon began a massive selloff leading to an unprecedented crash into negative territory on April 20th, 2020, sending shockwaves across the global financial markets.

Usually, investors would get out the future contract by getting somebody else to take the delivery of the oil, but in this case, nobody wanted to buy the oil.

The Dow plunged over 1200 points over the following couple of days. But, this was not entirely unforeseen as the exchanges discussed the possibility and recalibrated the software to handle the negative values. Even CNBC reported on April 1st, 2020, regarding the possibility of oil prices turning negative.

There was very little trading, and very few contracts were settled at the negative prices, and oil bounced back quickly in May, jumping by nearly 90%, recording the best month on record for WTI. It is important to remember that even though it was an unprecedented event, it was for a single instrument, i.e., WTI, and it was only for one day and only for contracts that expired in May 2020.

The petroleum industry is still suffering from the effects of the pandemic as major companies like Chevron and Exxon have announced deep production cuts to match the drastically lower demand due to major lockdowns across the world.

Whiting Petroleum, once a large player in the industry, became the first major company to file bankruptcy in April 2020.

The impact of decreased demand will impact the US petroleum industry heavily as most of the companies carry a high level of debt due to their high production costs.

The recovery of oil prices depends on how quickly and safely the world can open up completely. As the business and industries open up around the world and people go back to living their normal lives, they are going to need oil and gas, which the petroleum companies will certainly be happy to provide.