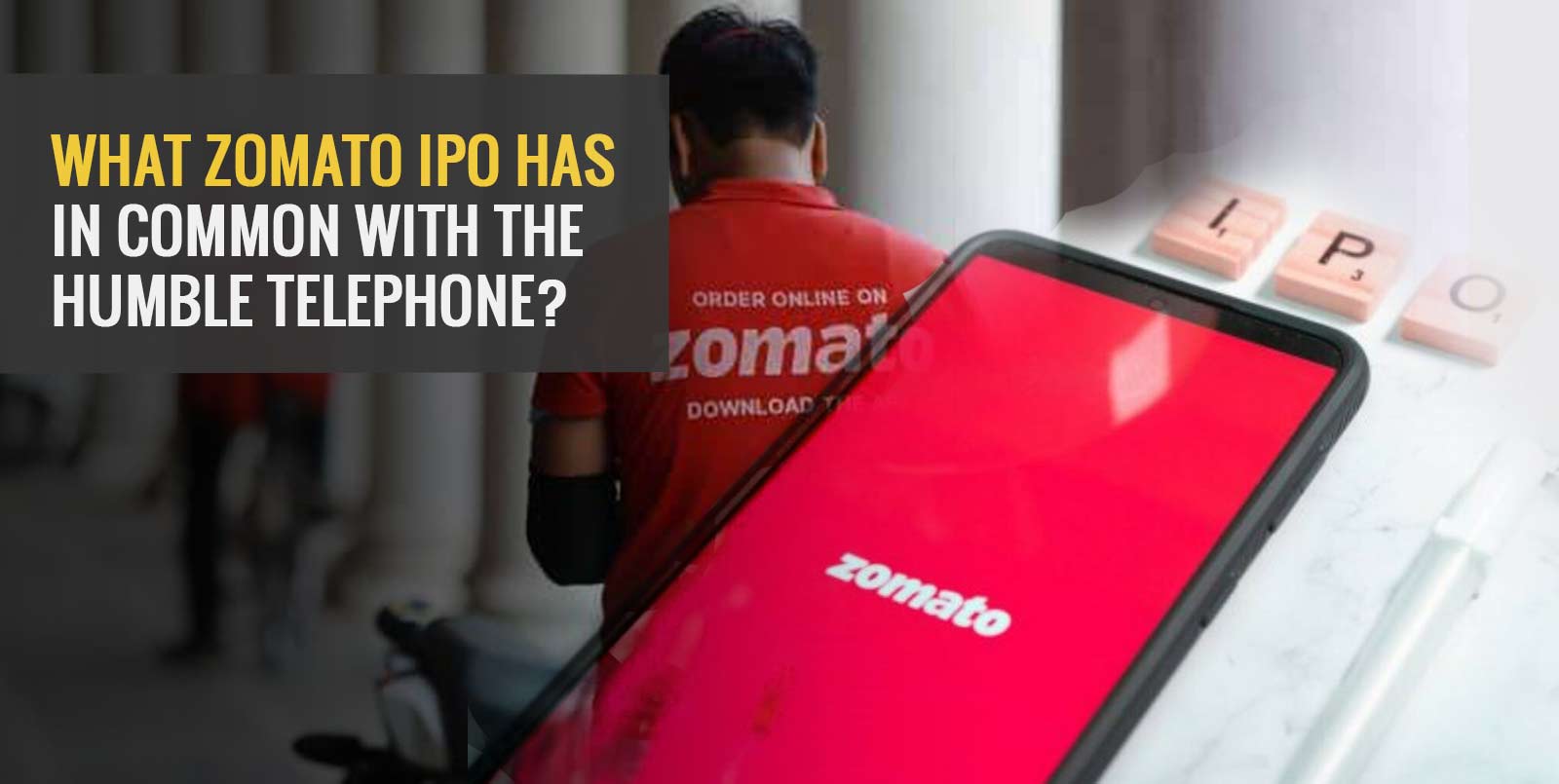 The investment market is baffled as to how a company’s IPO with heaps of losses is valued at such an incredibly high price. It is understandable. After all, the company’s annual earnings have not been too decent in the last couple of years.

Regardless, the expected market capitalization of this online food delivery giant is more than several hotel companies such as EIH (Rs. 7907 crores) and Indian Hotels (Rs. 17625 crores).

Interestingly, despite its losses, Zomato continues to stay afloat and expand its market base. This also makes Zomato IPO seem quite lucrative to investors who cannot wait to subscribe to the company’s shares.

Experts seem to have found an unexpected link between Zomato and the telephone!

Here is a quick look at Zomato’s recent financials and its IPO’s out-of-the-box connection to the telephone.

Zomato managed to clock in Rs. 1367 crores as revenue from April to December in the fiscal year of 2020-2021. Then again, its overall expense during the same period was nearly Rs. 1724 crores, leading to a loss of Rs. 684 crores.

Since it seems to generate income and incur losses simultaneously, many are questioning Zomato’s business model. In the fiscal year of 2020-2021, this company’s income dropped. However, relatively the losses plummeted faster than the dip in its income.

** The amounts are in million

In the last four years, Zomato has incurred a loss of over Rs. 4300 crores. What’s more interesting is that this company has somehow managed to stay in operation with the help of venture capitalists and through smart marketing.

But why would venture capitalists fund a loss-making company? The answer lies in the connection that we will discuss below.

Zomato seems to be banking on the concept of network externality to attract investors.

But what is network externality mumbo jumbo? This is where a simple telephone comes in.

Graham Bell could make his first telephone call to his assistant Thomas Watson because he too possessed the device. In other words, this communication medium was valuable because a person could reach out to others through it. But it would not be of much use if nobody else had it.

Hence, it can be said that the success of the mass communication medium depended on building a substantial subscriber base. As the number of subscribers continued to surge, newer subscribers wanted to join in. This increased the value of the telephone for existing subscribers.

When it comes to venture capitalists, they are keener on funding businesses that could cause a massive network impact. Hands down, Zomato is one such business. Investors want to fund them to grasp a sizeable market share and then focus on reaping benefits through the growth of the company they are funding.

As the company grows in market share or scale, the more valuable it becomes to its customers. Businesses like Zomato follow this approach and focus more on increasing their customer base than generating immediate returns. And to so do, companies often extend lucrative offers, discounts and even charge relatively low prices compared to unnetworked businesses.

Such expenses burn a hole in this company’s pocket in the initial years of operation. However, a networked company would be quick to recover losses down the road.

If you look closely, Zomato has been following this approach for a long time now. And because of the same reason, it has held onto its venture capitalists and expanded its customer base despite the burgeoning losses. And there is hope that the same theory would pull investors towards the company as well.

But where will Zomato stand if it stops its customer loyalty programme? That is an area we would need to revisit soon.

Now coming back to Zomato IPO.

It is expected that Zomato share price would go up after its listing. The primary catalysts are expected to be huge for this Zomato IPO and the large quantum of money chasing stocks in general.

Then again, in the long term, the stock’s performance will depend largely on how the company performs and how it boosts its business model.

Now, keeping these in mind, investors must tread on this IPO investment route.

The online food delivering company is professionally managed. However, its promoters are not identifiable under SEBI ICDR and the Companies Act.

The minimum order quantity of Zomato IPO is 195 shares.