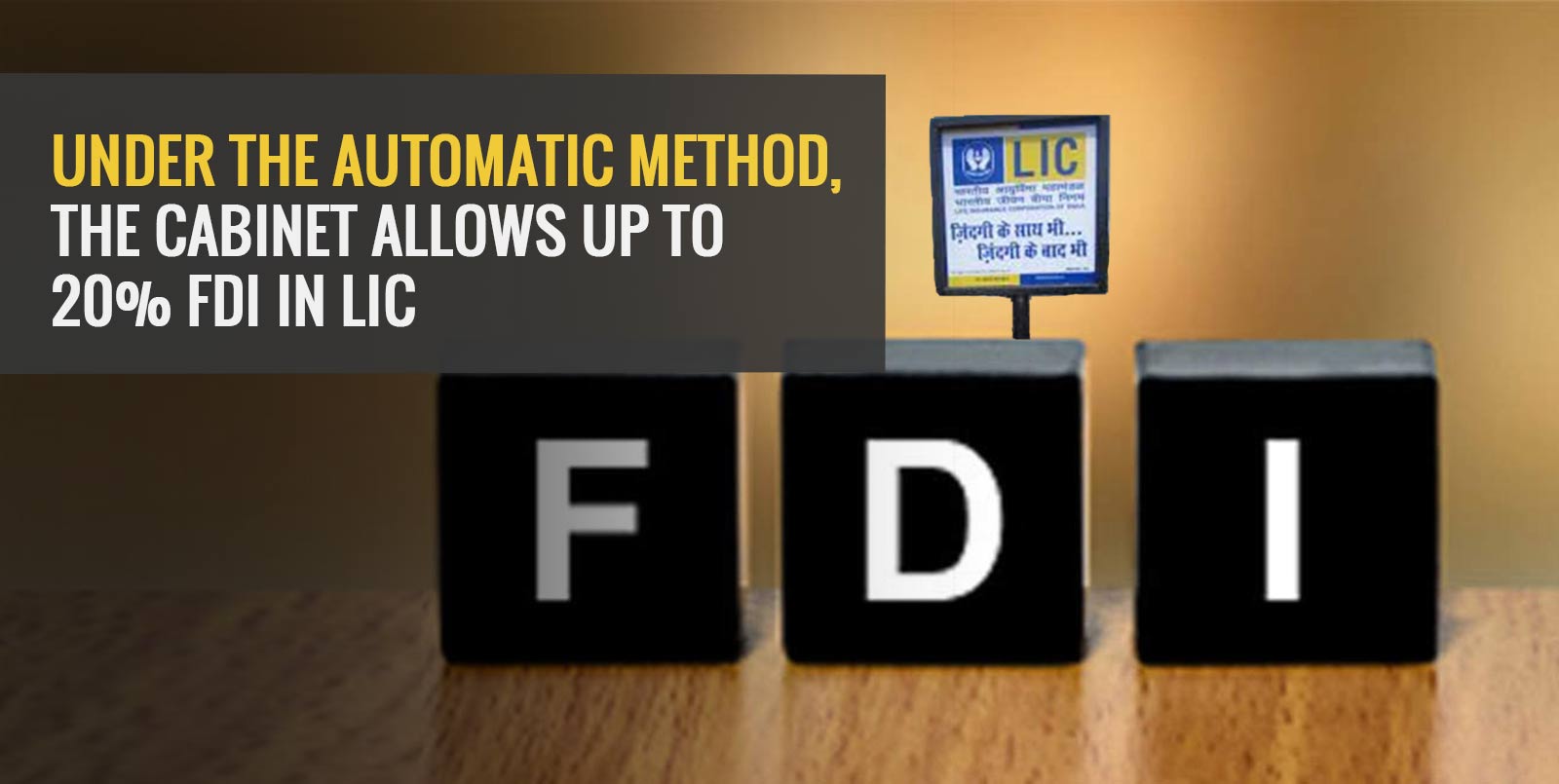 On February 26, government sources reported that the Union Cabinet has authorized foreign direct investment in the Life Insurance Corporation of India via the automatic method. They said that up to 20% FDI would now be allowed via the automatic route in LIC and that the present FDI policy has been “simplified and strengthened.”

Notably, under the approval process, the FDI limitation for public sector banks is set at 20%, and a similar maximum has been set for LIC. The automated approach, on the other hand, is supposed to speed up the capital raising process. “The FDI reform would encourage foreign investment in LIC and other similar corporate organizations,” the sources said, adding that the government may impose a disinvestment condition.

Experts predict that the reform will make doing business simpler and result in increased FDI inflows. At the same time, it will guarantee alignment with the overarching objective of the FDI policy, they noted. According to reports, the Union Cabinet and the Cabinet Committee on Economic Affairs will convene today. The Cabinet was anticipated to accept the proposal to enable foreign direct investment in LIC in order to ease foreign investors’ participation in the state-owned insurer’s planned initial public offering.

The suggestion requested that the Consolidated FDI Policy include a unique provision for FDI in LIC. Allowing FDI into LIC is considered as a “critical step” since the government aims to sell a share in the company through an initial public offering (IPO) by March 2022. This is because, according to the Department for Promotion of Industry and Internal Trade’s current FDI policy, foreign investment is permitted in “insurance businesses” and “intermediaries or Insurance Intermediaries.”

LIC was not covered by either business or middleman since it is neither. Furthermore, neither the LIC Act of 1956 nor the Insurance Act of 1938, nor the rules, provide any provision for FDI. There are no such provisions in the Insurance Regulatory and Development Authority Act of 1999.

In April-December of this year, India received USD 60.3 billion in total FDI

According to official statistics, India got USD 60.3 billion in total foreign direct investment from April to December 2021, which is 10.6% less than the USD 67.5 billion received in the same period of 2020-21.

According to a UNCTAD study released in January 2022, India saw a 26% drop in FDI in 2021 compared to the previous year, owing to the absence of significant mergers and acquisitions agreements that occurred in 2020. This came despite a 77% increase in global FDI flows in 2021, from $929 billion in 2020 to a projected USD 1.65 trillion in 2021, exceeding its pre-COVID-19 level.

According to the UNCTAD’s World Investment Report issued in June last year, India has seen a large increase in strong FDI revenues as a result of the epidemic, obtaining USD 64 billion in FDI in 2020. It was the world’s fifth-largest beneficiary of inflows, up 27% from USD 51 billion in 2019, owing to acquisitions in the information and communication technology sector.