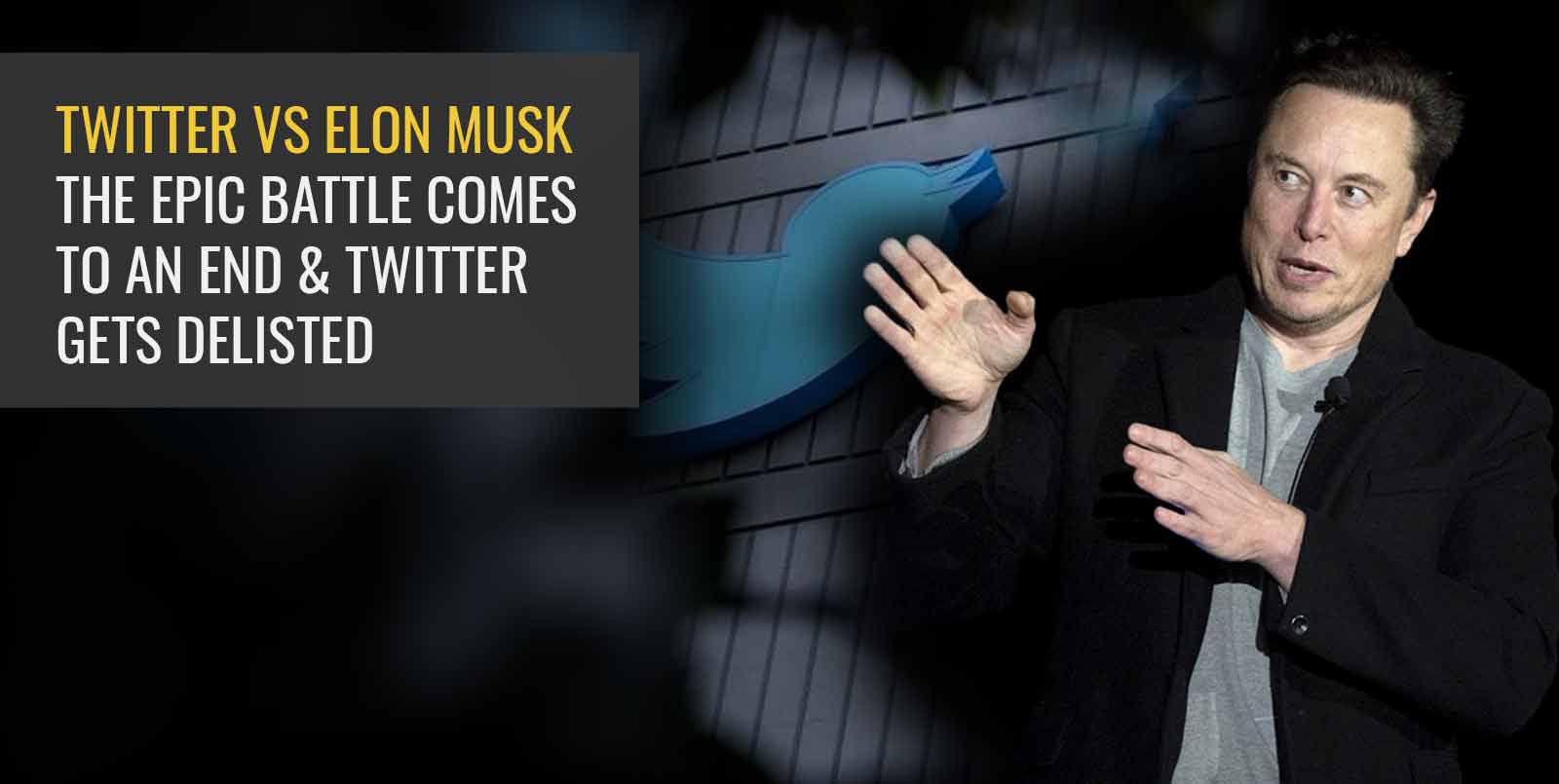 The world’s richest man, Elon Musk, finally concluded the much talked about deal to take over Twitter. The takeover was conducted for a whopping $44 billion – one of the largest acquisitions of a tech company. Moreover, it was also decided to delist Twitter from the New York Stock Exchange, turning it into a private company – its shareholders will receive $54.20 per share while its current board of directors will be dissolved. The delisting will take effect from Friday, October 28th and the shareholders will automatically lose their shares in return for the aforementioned amount.

While former Twitter CEO Parag Agarwal and some of the top executives such as CFO Ned Segal were escorted out of their prized offices after being fired, Mr. Musk tweeted “the bird is freed” in an apparent reference to the deal. Whether the “bird” in question was freedom of speech or the company or Mr. Elon Musk himself is a question asked by those who kept a close track of the events and the discourse surrounding it since early 2022. The story has been one full of lost love, virulence and epiphany.

It all started in January 2021, when Elon Musk called Twitter’s banning of former US president Donald Trump’s account ‘foolish’. The episode had put light on the ability of tech giants to curb free speech on social media as and when they pleased and stirred the debate on freedom of speech.

Then in January, this year, when Elon Musk started buying up shares of Twitter regularly and by 14th March, he held a 5% stake in the company (5% being the threshold for an SEC-mandated public disclosure). Musk delayed the disclosure until April 4th, by which time he had bought 9.2% of the company already. During this period, the share price of Twitter also saw a sustained decrease.

However, when the Twitter board expressed its approval for him to join them, he refused. Instead, he offered to buy off Twitter at $54.20 per share, placing the valuation at $44 billion. The board accepted it soon, despite earlier having taken a temporary poison pill (i.e. a limited duration shareholder’s rights plan allowing shareholders to buy additional stocks at some discount) to resist it. At the time, Musk chose to waive the due diligence i.e. he relinquished his right as a stakeholder to investigate the company.

However, surprise came on May 13th as Musk announced that the deal was on hold while his team investigated Twitter’s claim that less than 5% of its accounts were fake and spam. When Twitter CEO Parag Agarwal responded to explain the 5% figure, Elon Musk, in all his grace, responded with a poop emoji. 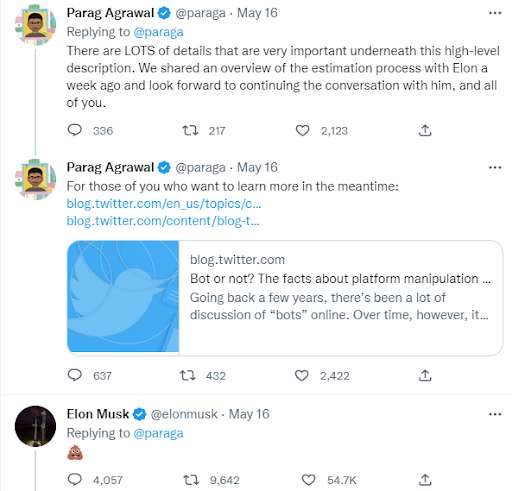 Subsequently, he filed a complaint with the SEC claiming that Twitter was resisting his information rights and that he had the right to not see through the deal. Twitter, in response, gave Musk full access to its data. However, on July 8th, Musk’s legal team told the SEC that Musk was not going to go through with the merger. Twitter, in turn, vowed legal action to enforce the original deal.

This was followed by a vicious court battle involving suing attempts and subpoenas. But the major surprise this time came when former Twitter security chief Peiter Zatko gave an explosive whistleblower complaint, that ran 84 pages long, to the Washington post – the report published on August 23rd  claimed that Twitter lied to Elon Musk about its spam accounts and had fragile security practices that violated a previous FTC settlement agreement. Zatko was subpoenaed by Musk’s team but the judge on the trial came down on the team for their request for excessive data points from Twitter. The judge also refused their requests to delay the trial.

Overall, Musk’s attempts to leave the deal slowly became more and more unsuccessful. Finally, as the mid-October trial dates approached, he suddenly showed a renewed commitment to go through with the deal for the “long-term potential” of the “asset”. The decision

Had Elon Musk been able to walk away from the deal, Twitter’s share price would have taken a major hit – however, the hard-fought court battle prevented any such thing from happening. Parag Agarwal, though fired, walked away with a lucrative $42 million under the contract.

Elon Musk used to have several plans for Twitter, including cutting its staff size, turning it into a superapp, fixing the issues of content scrutiny and moderation etc. Given the fact that he is CEO of Tesla and SpaceX already and how unenthusiastic he was regarding the deal for such a long period of time, whether he follows up on these schemes is something one cannot predict with certainty.

The Twitter deal is expected to bring with it an impact on the US stock market – especially related to the shares of Elon musk’s companies. If you are interested in investing in US stocks, you can open a demat account with us and start exploring such shares through the Angel App via Vested.