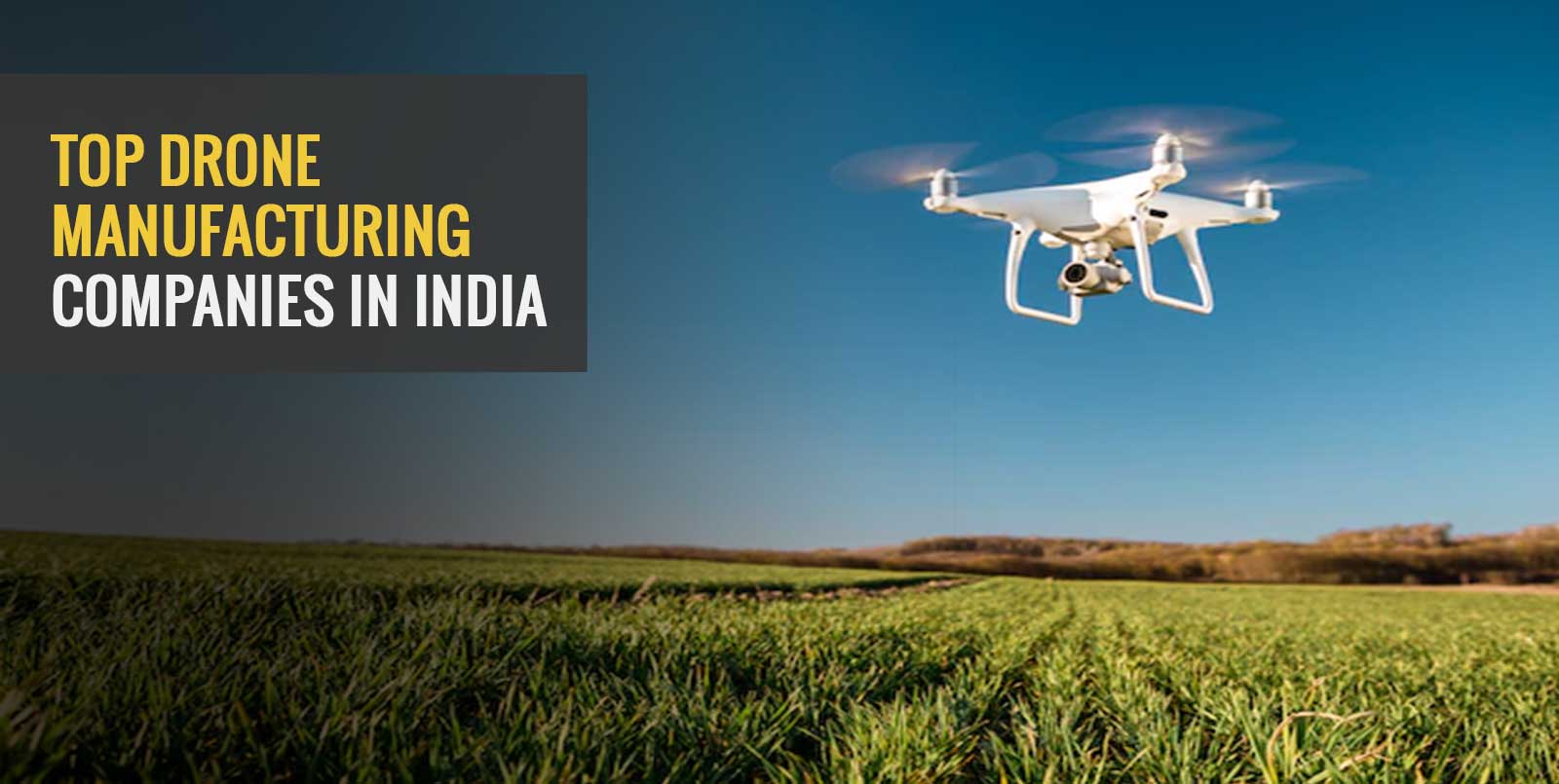 Drones: The tech for the future.

A remotely controlled vehicle is a drone that resembles a miniature aeroplane. It is also known as an unmanned aerial vehicle or UAV. It is operated by a remote and features a small yet sophisticated robot-like construction. This airborne vehicle’s major objective is to facilitate the simplification of our lives. Drones are capable of carrying and delivering groceries to our front door as well as delivering packages inside the house.

Additionally, it is frequently used for military or defence applications and may be manipulated to carry out incredibly dangerous jobs like examining an active volcano or any encroaching danger zones.

Food, grocery, and e-commerce companies like Amazon, Zomato, Swiggy, etc. are looking for methods to improve the effectiveness of their delivery services using drones due to their broad capabilities and distinctive service alternatives. Let’s examine how drones and the manufacturers of drones are assisting us in both our daily lives and other areas.

This large aerospace and defence firm have a division called Insitu that is solely focused on designing, developing, manufacturing, and operating unmanned aircraft systems. The company’s technology can be used for commercial purposes such as environmental monitoring, agriculture, search and rescue, disaster relief, and mining activities in addition to defence applications. According to Uri Gruenbaum, CEO of TipRanks, its ScanEagle, QF-16, and MQ-25 aircraft “have gotten quite a response from the company’s client base,” with an average 12-month price objective among 18 analysts of $213.27. The potential gain over the $136.75 closing on June 21 is significant.

TipRanks’ average price objective for this significant aerospace and military contractor indicates that analysts anticipate a price increase as well. From its closing on June 21 of $418.96, there is an increase of $86. The RQ-170 Sentinel, which was made by Lockheed and is intended to provide reconnaissance and surveillance, is currently being developed, tested, and fielded by the Air Force. Lockheed isn’t just a drone stock; this year, $66 billion in net sales are anticipated. However, as the military continues to explore methods to put fewer pilots in danger, its sales of drone technology may increase.

According to Gruenbaum, this aerospace and military corporation and the aforementioned contractors “are the most trustworthy and well-established enterprises in the UAV market of the United States.” Being a part of the expansion of the American drone market is advantageous for them, he continues, as these businesses stand to gain from the high demand from the commercial, military, surveillance, and entertainment sectors. The players have gained a reputation in the UAV sector, according to him, because of their strong product lines, technological know-how, and inventive abilities. These firms have an advantage over rivals thanks to their strong liquidity position and simple access to other resources needed in the industry.

The drone industry only accounts for a small portion of the overall sales of the major aerospace and defence industries. A more pure play is AeroVironment, a tiny defence firm that also sells drones for business purposes. The business said this month that the U.S. Marine Corps granted it a contract worth $6.2 million in May for its Puma 3 AE drones. According to the firm, the bulk of unmanned aircraft in the Defense Department’s inventory are tiny unmanned aircraft systems. More than 50 allied states, including Ukraine, are among AeroVironment’s “rapidly expanding worldwide client base,” the business claims.

Drones have been in the news for years because the United States and other nations utilise them for quick, unpredictable military attacks. Drones previously had a bad reputation, but that is starting to change as people realise how much better their lives are because of drones.

People, businesses, and governments have realised that drones may be used for a variety of purposes, some of which include:

Drone use has the following main advantages:

Top Pros and Cons of Drones

It’s crucial to consider all sides of the argument on their own merits in order to fairly balance the benefits and drawbacks of drone use. For instance, there are several arguments in favour of drone use.

Drones are great for capturing stunning aerial images and videos as well as gathering enormous quantities of imaging data. The creation of dynamic 3D models and 3D maps using these high-resolution photos has several advantageous applications. Rescue crews, for instance, may be better prepared before approaching risky circumstances if catastrophe zones are 3D mapped.

Unmanned aerial aircraft may be programmed and steered precisely to specific areas because they use the Global Positioning System (GPS). This is especially beneficial in a number of circumstances.UAVs are used in precision agriculture, for instance, to identify weed infestations, apply pesticide and fertiliser, and check on the condition of the crops. UAV accuracy allows farmers to save money and time.

The majority of drones can be deployed and managed with only a modest amount of skill because of advancements in control technology. Drones are becoming more affordable for a variety of operators thanks to this and the relatively cheap cost of the majority of models. Additionally, UAVs can go farther than human planes. They are able to fly lower and in more directions, which makes it simple for them to get through previously inaccessible places.

The utilisation of drones has security as a benefit as well. Unmanned aerial vehicle (UAV) operators may utilise UAVs to offer security and surveillance for private businesses, athletic events, public meetings, and other places with the proper authorization. In order to support security and recovery operations during and after natural catastrophes, drones may also collect important data.

While employing drones has many benefits, there are also some perceived drawbacks to their use. These issues are crucial to take into account, especially in light of the variety of situations in which drones may be utilised.

Since unmanned aerial vehicles are just recently been used extensively, the law is gradually catching up. There are still some grey areas in the Federal Aviation Administration’s (FAA) guidelines regarding tiny, unmanned aircraft used for both commercial and recreational purposes. How to most effectively define airspace property rights and safeguard landowners from aircraft trespassing are both open questions. Conflicts between various state and municipal laws and federal rules further contribute to the complexity.

When working with unmanned aerial vehicles, safety comes first. UAVs must be designed with “detect and avoid” capabilities that are comparable to those of human aircraft in order to prevent mid-air collisions. Therefore, drones must have the ability to recognise probable collisions and steer clear of them. Falling drones pose a significant risk in the case of system failures, particularly when they are employed close to densely populated regions or among huge crowds.

Privacy is one of the main issues that the general public has with UAVs. Since drones can gather information and photos covertly, many Americans worry that their Fourth Amendment right to privacy may be in peril. This might happen if authorities used drones to observe citizens. The Fourth Amendment’s interpretation as well as the work of privacy rights groups like the American Civil Liberties Union (ACLU) continue to have an impact on how this matter of privacy is dealt with.

A variety of permissions, such as a unique authorization number and a unique prototype identification number, were formerly required by the Indian government.

No longer are any permissions necessary thanks to these new regulations.

The drones’ payload has also been boosted by the centre from 300 kg to 500 kilogrammes.

Along with the aforementioned regulations, the government has announced several more guidelines. They may be read here. Which businesses will thereby profit from the new regulations?

Here are a few Indian companies which are chasing the exploding drone market.

Investments have been made in Bengaluru-based Skylark Drones by Info Edge (India).

In July 2021, Info Edge Ventures and the Indian Angel Network (IAN) fund jointly led Skylark Drones’ pre-Series A investment round, which saw the company raise US$3 million (about Rs 220 million).

To test its drone delivery technology, Swiggy has collaborated with Skylark.

The business claims to be assisting 100 enterprise clients who have processed over 1 million photos and 20,000 autonomous flights using its platform. It has operations in the US and India.

In accordance with this agreement, DCM Shriram Industries purchased 30% of the company’s shares for US$1 million, giving it a total worth of US$3.5 million.

DCM had been interested in investing in Zyrone for a while, but because of the pandemic situation, the negotiating process took 18 months.

In accordance with the agreement, Zyrone will offer DCM Shriram Industries technical assistance, and both parties will cooperate to promote the goods in India and beyond.

There are lot of risks involved in share market. Check the share price of DCM Shriram Industries before investing.

With operations in India and the USA, Zen Technologies is a top provider of defence training solutions.

The business creates, develops, and produces cutting-edge combat training solutions for the instruction of defence and security personnel across the world.

The business had previously notified exchanges that its order book has significantly increased to Rs 4 bn as of 1 September 2021 from Rs 1.9 bn as of 30 June 2021.

RattanIndia Enterprises invested strategically in Matternet, the largest urban drone logistics platform in the world, in August 2021. Matternet is situated in the US.

In order to launch the drone industry in India, a subsidiary called NeoSky was also launched.

The business made an initial investment of Rs 1 billion on this. NeoSky will create, produce, and market micro drones all throughout India.

The company’s stock has been on a tear since the news broke. RattanIndia shares soared sharply after hovering at the same level for around three years.

Additionally, it invests in online retail and financial businesses through Bankse (via Cocoblu).

The company has committed around Rs 30 bn for investment in four businesses and it appears Mr Market has already factored this in its share price.

Know detail about the share price of the company before investing.

In India, the drone market is anticipated to grow. In this decade, it is predicted that India would have a multibillion-dollar drone industry.

According to a worldwide market intelligence and consultancy organisation, India will account for around 4.25 per cent of the US$28.47 billion global drone industry this year, which is presently controlled by the US, China, and Israel.

The foundation of growth has been led by the new Drone Rules 2021. With the rising number of drone training institutes, India will not be far behind.