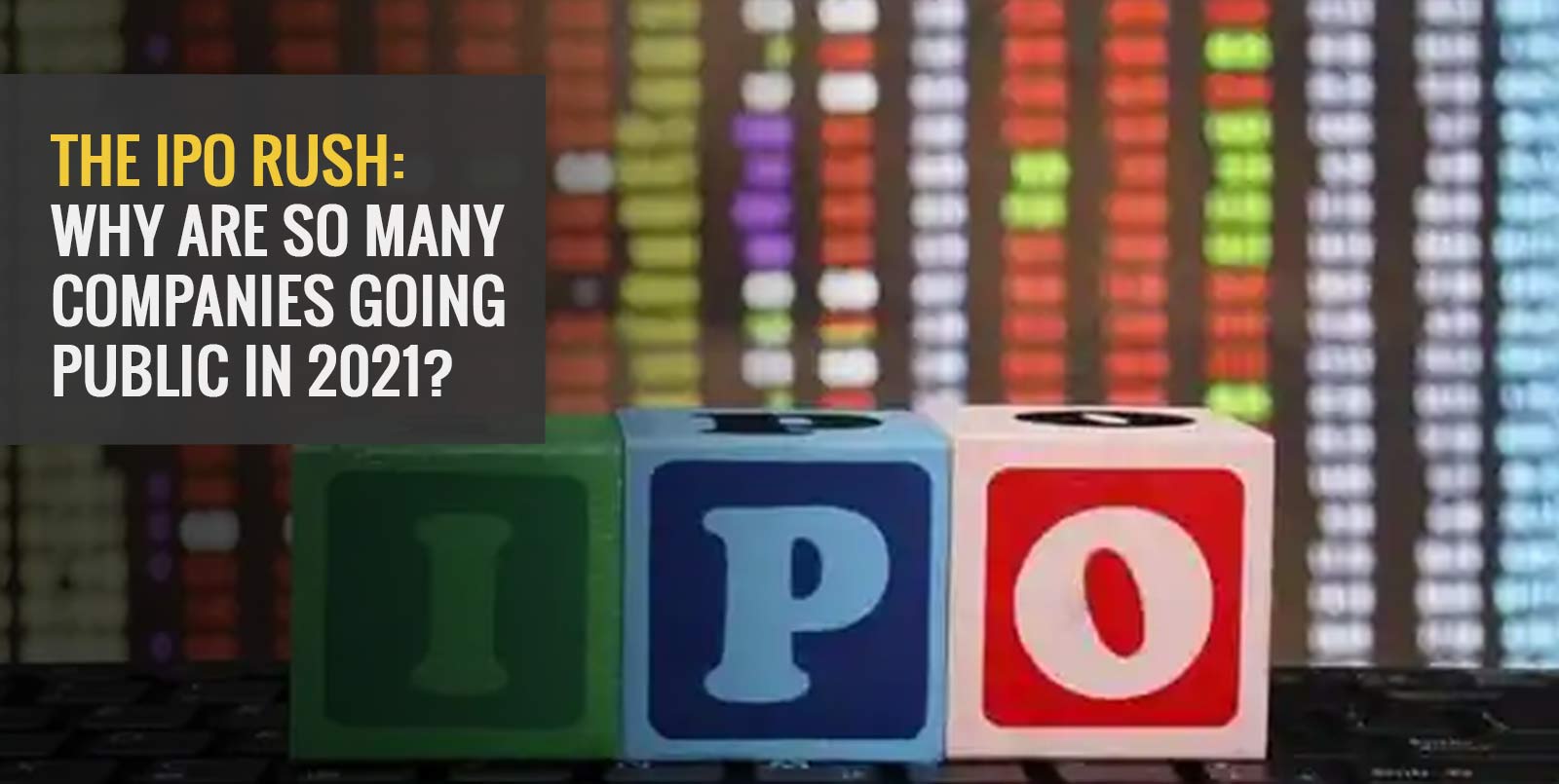 With eleven companies going public in the month of July alone this year, everyone seems to be excited about more upcoming IPOs. The COVID 19 pandemic made the stock market feel jittery last year with major disruption of economic activities and few companies calling off their IPO plans till the market activity changed towards the end of the year. Several companies have gained unicorn status since the start of 2021, and more companies than expected have gone public. Till July 2021, Twenty-eight companies from various sector companies from tech startups and restaurant chains to chemical manufacturing firms have gone public, and nearly 30 companies are about to join the IPO bandwagon this year itself. Almost Rs 27000 crores are raised by these 28 companies, including Zomato, IRFC, Brookfield India REIT, breaking records to be the highest amount raised through IPOs in the first six months of the past decade.

The question is, why are so many companies deciding to go public this year? To make sense of this IPO craze, let us first understand what going public means and how these IPOs work.

When a private company offers its equity shares to the public to raise money from the investors to become a publicly listed company, it is said to be an Initial Public Offering (IPO). When companies surpass a valuation of $1 Billion, they are declared Unicorns. Such companies usually go for IPOs. However, companies that are listed profitable and have strong fundamentals may also decide to go public.

IPOs are a significant milestone in the life of a company. They are raised when the company decides it requires money for a particular reason, such as growth and expansion, clearing debt, and funding corporate expenses.

Any company or startup doesn’t multiply immediately after their inception; they eventually grow over a period to become profitable. Various rounds of funding at the seed stage and further infusion of capital through private and angel investors lead to the company’s growth. But there comes the point where the company growth is saturated, and though the growth rate might be positive, there is a flattened growth curve by a decrease in the rate. At such a time, the company might take the IPO route to raise capital from the public.

At other times, a company might be making good operating profits but does not have enough capital for expansion as the profits go towards clearing past debts. In such cases, going public helps the company repay debts and use its profit as well as newly raised capital for the company’s growth.

How does it work?

The IPO needs the approval of the market regulator SEBI to go public. Post-approval, the IPO details, including the launch date, lot size, price band of the IPO, and amount of share sale for different types of investors- institutional, non-institutional, anchor investors, Qualified institutional investors, are made available to the public.

Investors usually get 2-3 days to subscribe to an IPO after its launch date. Investors bid for the company’s shares via various platforms in this period. Individuals that subscribed need to check the allotment status released by the company post the deadline. The process is complete once the shares are listed on the stock market on a predetermined date.

Finally, Why are so many companies going public in 2021?

The IPO rush started at the end of 2020 due to increased stock market activity and the pandemic’s impact on businesses. The overall excellent performance of the stock market has had a very positive impact on the companies planning to go public this year.

It is also seen that loss-making companies are launching IPOs as the bull run could incentivize investors, convincing them to pour in new money into the company.

As an effect of the pandemic and owing to the ease of opening a Demat account, there was a huge increase in the number of first-time investors in the market. Over 1.4 crore new Demat accounts were opened in FY 2021, according to a State Bank of India report. This indicates the huge investor appetite in the current scenario.

There is also an increase in the ease in applying for startups from the regulatory aspect as SEBI, the market regulator of India, has reduced the requirement for issuers to have 25% of pre-issued capital held by eligible investors to one from down from two years. This change has made it easier for companies to get listed in the stock market.

The bull market scenario is also helping the companies to get greater subscriptions and a chance to get premium listings.

Many tech startups such as Mobiquick, Paytm, Nykaa have benefitted from the pandemic. Such startups need to raise further capital to successfully meet their rapidly growing demand and focus on expanding their business. Going public allows such startups to raise a considerable amount of capital to help them sustain their long-term growth plans.

With many more companies currently planning to debut in the public market this year, the upcoming IPO list looks quite promising next year. The market’s sentiment is already raised with the upcoming IPO launch announcements of companies such as Policybazaar, Adani Wilmar, Nykaa, and PharmEasy. Together they will be raising a tremendous amount of capital, increasing the robust market performance of the capital market in India. LIC is also set to issue shares for the public, with its IPO valued at Rs. 7000-8000 crores, set to become the largest IPO launch in India.

The Indian startup ecosystem is spreading its permanent roots in the capital markets of India, and much more is in store for the companies and investors going ahead this year.