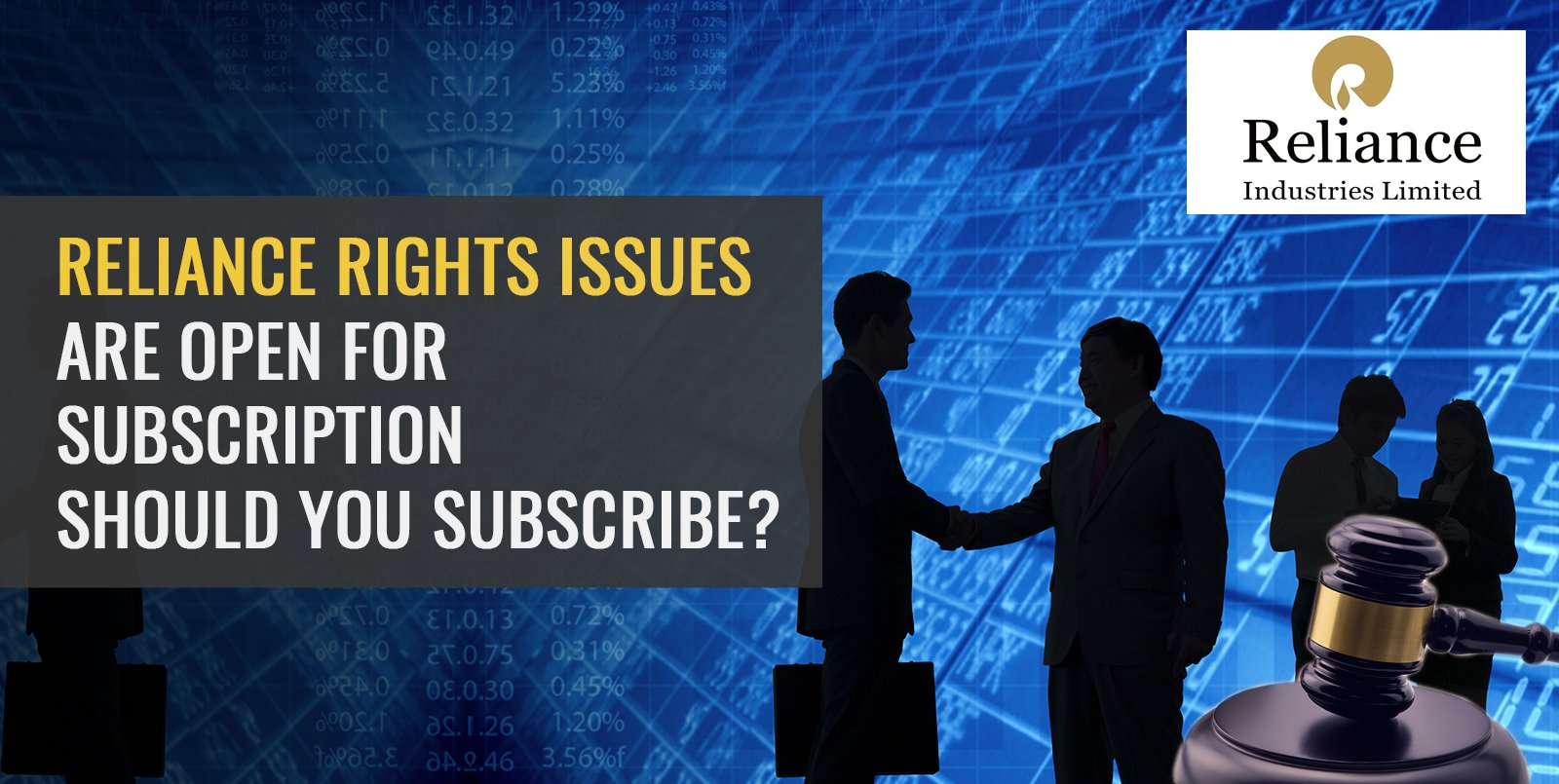 Largest ever in India, the Reliance rights issue has succeeded in creating quite a stir amid investors. Experts believe this will help in reviving the stock exchange, which has been sluggish since lockdown is announced in India on March 24th and promote a rally in its stocks.

Existing shareholders can subscribe to the rights issues and get one share for every 15 shares that they hold. It is proposed to all the stakeholders as identified by Reliance on May 14th. The subscription will end on June 3rd.

But should to exercise your right and subscribe for the shares?  Experts are saying, yes. Here is why,

Since it was announced, Reliance stocks rallied, and there were lots of retail buying in the range of Rs. 1,300-1,400.

Reliance rights issues can be traded in the secondary market in case stakeholders decide to renounce their rights. Given the current market trends and future predictions, experts presume these rights to change hands at Rs. 210.  Shareholders can trade in the Trade to Trade (T2T) market until May 29th.

In August 2019, Reliance Industry Ltd. Supremo, Mr. Mukesh Ambani, told his stakeholders that the company aims to become net-debt -free by March 2021.  On April 29th, RIL declared to issue its first tranche of rights issue – first time in three decades. The company hopes it will help in reducing its total debt burden and in becoming debt-free. The company finalised its plan to go ahead with rights issue release and invited investors to subscribe for their shares.

RIL is expected to raise Rs 53,125 crores through rights issue release. It aims to raise Rs 1.04 trillion by June this year. After that, it will only have to raise Rs 56,000 crores to meet its goal.

The other deals of Reliance

Reliance Industries Ltd. (RIL) in this year has already scored a four in sealing premium deals with four top American investors. It is a significant achievement for Reliance, which has aimed to wipe its slate clean by paying off net debt worth Rs 1.61 trillion, as in March 2020, by next year.

Earlier, RIL has announced a deal with Facebook. The American tech giant has acquired a 10 percent stake in Reliance Jio platform with a staggering investment amount of ₹43,574 crores. It has sent both the stock value and enterprise value of Reliance soaring.

RIL aims to reduce its debt burden significantly from the money raised through the deal. Out of Rs 53,125 that it hopes to raise through rights issues, Rs 39,755.08 crores will be used for repayment and prepayment of current debts. Given RIL’s performance in the current market condition, experts believe that it will continue to perform well in the market, and current stakeholders will gain in the long-run if they subscribe today for more shares.

Reliance will issue 42,26,26,894 equity shares to raise funds to cover its debt exposure in India’s biggest-ever rights issue release. In size, it is even bigger than Bharti Airtel and Vodafone rights issue deals of Rs 25,000 crore each in 2019. These issues will continue to trade as standalone till fully paid. After that, these will continue to sell alongside the existing ones.  On day one, 0.27 percent of stakeholders have applied to subscribe for their shares.