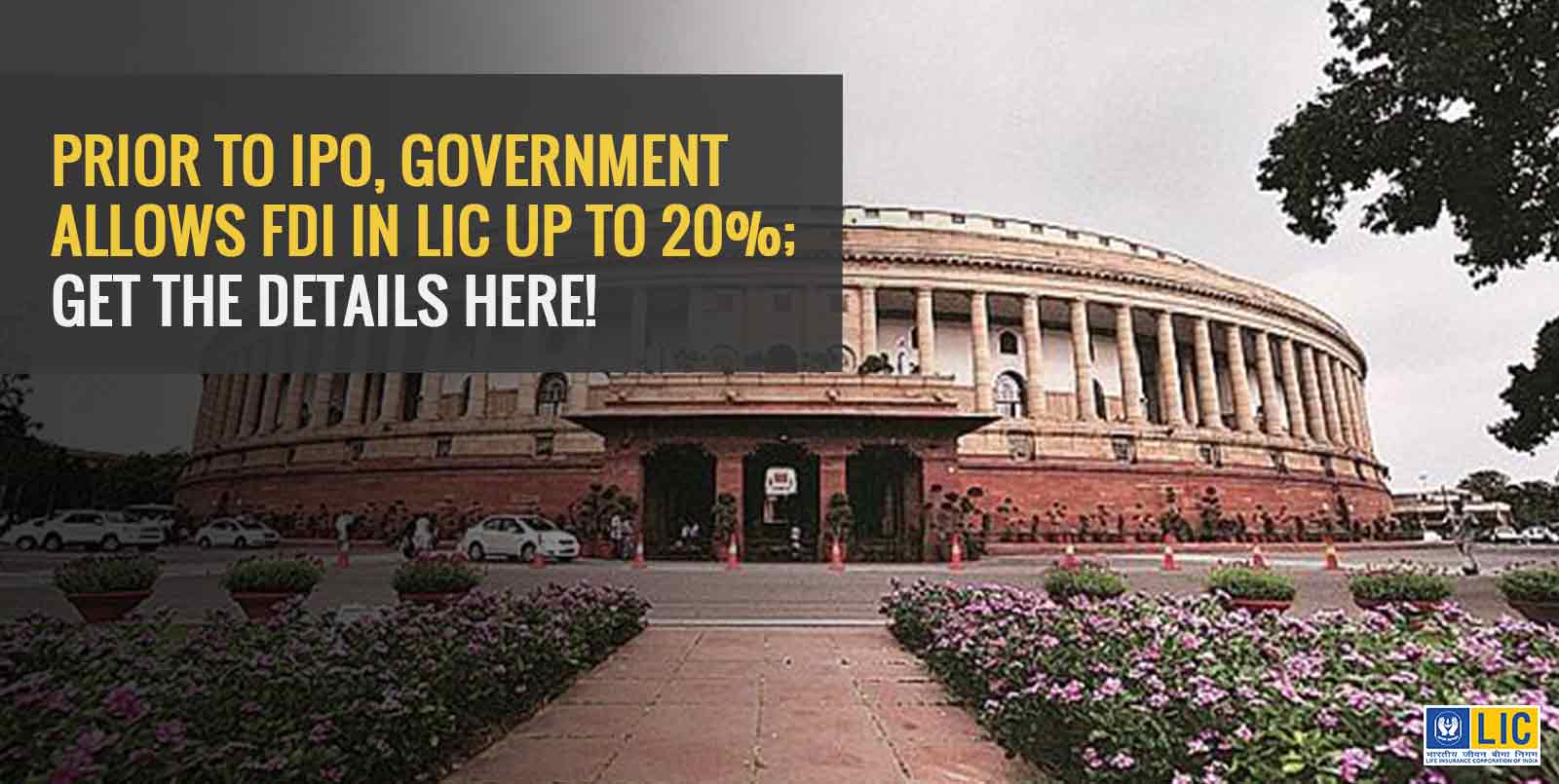 On Saturday, 26 February 2022, the UNION Cabinet passed an amendment to the Foreign Direct Investment (FDI) policy to clear up to 20% FDI in the Life Insurance Corporation under automatic route.

This came before its much-awaited IPO (initial public offering), which is expected to be the greatest in the nation’s market so far.

What About the FDI Ceiling in LIC?

The existing Foreign Direct Investment Policy does not recommend any particular provision for FDI in LIC that is incorporated under the LIC Act, 1956. The limit for LIC is now equivalent to that of public sector banks.

While the Central Government had increased the FDI ceiling in the insurance industry last year from 49% to 74%, it didn’t include LIC, which is regulated by particular legislation. Since, according to the current FDI policy, public sector banks’ FDI ceiling is 20% through Government approval avenue, it has been prescribed to keep up to 20% foreign investment for LIC and other corporate bodies.

Further, to accelerate the capital raising procedure, FDI has been allowed through the automatic route, just as in the case of the remaining insurance industry. Foreign investors may be eager to participate in LIC’s IPO, and this would offer foreign investment in LIC and other corporate bodies. The Government may need this for disinvestment purposes.

This relaxation will give way to LIC’s inclusion in the recognised Nifty 50 Index. Since various passive funds allocate their investments to index stocks and indices, this decision, along with foreign investment approval, is likely to bring forth large inflows in LIC’s offering.

What Is the Government’s Expectation?

Once SEBI approves the public issue, the IPO is expected to open for subscription during the 2nd week of March, with trading commencing by the 3rd week. The Government is proceeding with LIC’s listing, despite rising global concerns amidst the Russia-Ukraine war and increased market volatility.

With this move and other adjustments in FDI policy, the Government desires to create India a lucrative investment hub. India’s FDI inflows rose from $74.39 billion in FY 2019-20 to $81.97 billion in FY 2020-21. Further, this FDI policy reform will enhance the nation’s ease of doing business, leading to the growth of employment, income and investment.

Know About India’s FDI Regulations for the Insurance Sector!

Besides, no ceiling is recommended for FDI in LIC under the Insurance Regulatory and Development Authority Act, 1999, the Insurance Act, 1938, the LIC Act, 1956 or the guidelines made under the corresponding Acts. So, this specific amendment clears 20% FDI in LIC.

Mr. Tuhin Kanta Pandey, secretary of DIPAM (Department of Investment and Public Asset Management), stated that this 20% FDI would be sufficient, keeping in mind the existing requirements and regulations. According to him, since LIC isn’t an insurance entity, insurance laws are not strictly applicable for it, other than some specific provisions that are mentioned in the LIC Act.

They’ll have to keep 51% by law without going below it. Even after proceeding with an IPO, they can dilute up to 25% in the first 5 years. Further, no single individual can own above 5%. So, an FDI of 20% will be far from better for that route.

Get an Insight into LIC’s IPO!

The IPO of 31.62 crores equity shares consists of the policyholder reservation part, employee reservation part and the net offer. It works out to nearly 5% of 632.49 crores shares (total capital), with the Government keeping the outstanding 95%.

The insurance giant can allocate a maximum of 60% of the qualified institutional buyers (QIB) portion on a discretionary basis to anchor investors. Domestic mutual funds can access a reservation of 1/3rd of the anchor investor part.

With only a month left for the fiscal year to end, the Government is trying its best to make the LIC IPO a hit. Permitting FDI will enable foreign portfolio investors to buy shares from the secondary market. Besides, it sends an optimistic and promising signal to investors.

Go through Angel One blogs to get the latest updates about the stock market, IPOs and investment.

1. How much money can the Government mobilise from LIC’s share sale?

2. What can be the price band for LIC?

As per market estimates, the price band of LIC’s public issue can be between Rs. 2,000- Rs. 2,100. However, LIC hasn’t yet announced its IPO’s price band.

3. What was the share capital growth for LIC in September 2021?