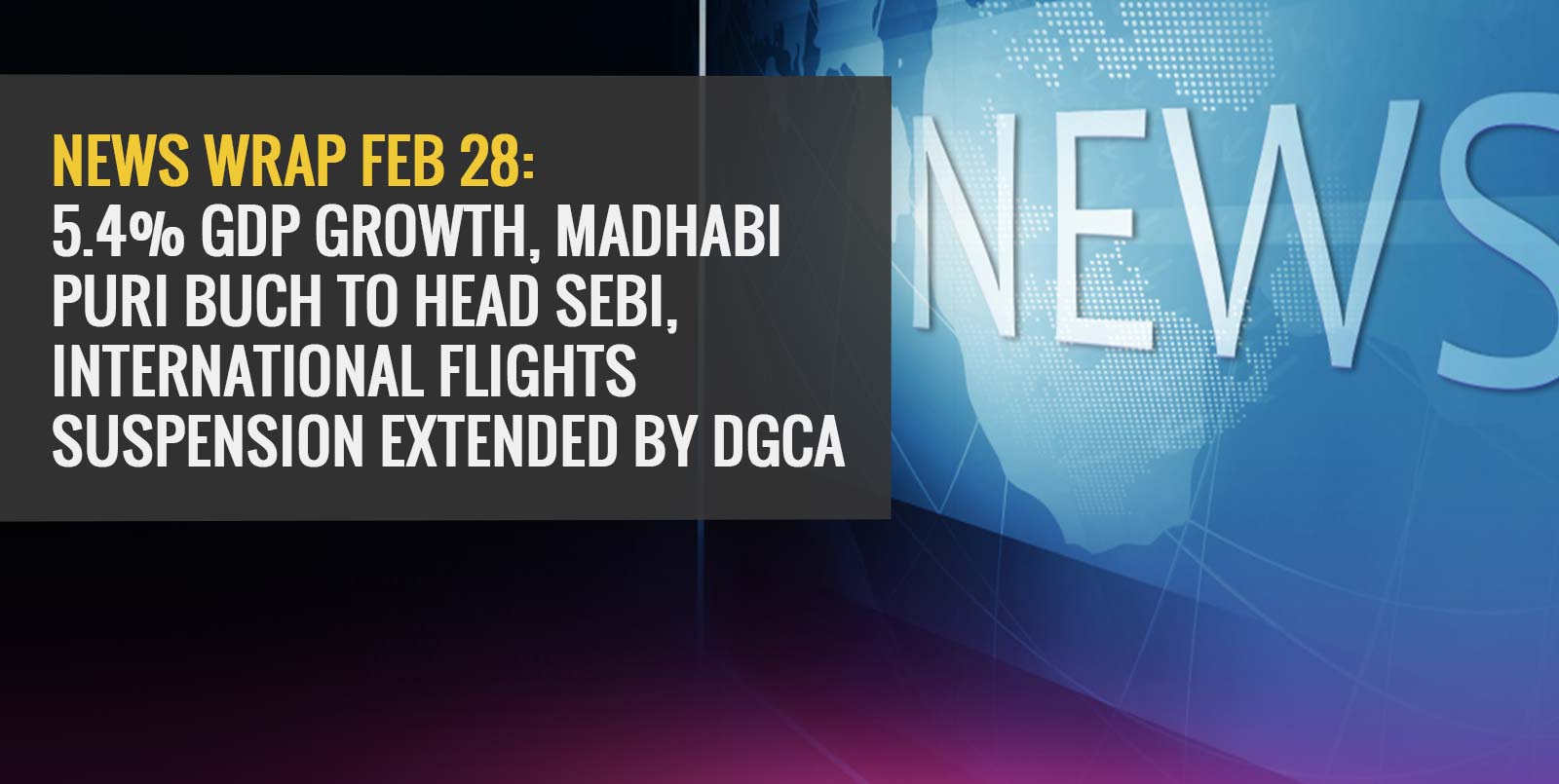 The Indian economy witnessed a 5.4% growth during the period of October to November 2021 as per the GDP data released on Monday. Madhabi Puri Buch was appointed to take charge of the Securities and Exchange Board of India for three years, beginning from 1 March 2022. She becomes the first woman to head SEBI and will succeed Ajay Tyagi. The international passenger flights that were scheduled were suspended until further orders by DGCA.

Here is a wrap of some of the crucial developments in business, economy, politics and other sectors.

News on Business and Economy

During Q3 of the financial year 2022, India saw a GDP boost by 5.4% as per the data released on the gross domestic product (GDP) Monday. The GDP for Q3 of FY2022 at constant prices has been estimated at Rs. 38.22 lakh crores. This is against the GDP of Rs. 36.26 lakh crore for the year-ago period.

Russia’s war against Ukraine has prompted a series of various Western sanctions, which has led to a damaging effect on the Russian economy. To prevent the ruble from dropping further and to reduce the impact of sanctions on an already crippling economy, the Russian Central Bank had to hike the benchmark rate from 8.5 per cent to 20 per cent..

Google Play store announced on Monday the launch of a Play Pass section. This section will offer over 1000 games and applications without any advertisement. Further, it is set to provide access to the application’s premium contents and features on a fixed charge on an annual or monthly basis.

News on the Market

The Securities and Exchange Board of India (SEBI) is set to get its first woman chairperson. Madhabi Puri Buch will take charge as the head of SEBI from 1 March 2022. She was a whole-time SEBI member formerly, and now the reigns are transferred into her hands from Ajay Tyagi for a period of 3 years. Further, she is the first woman to be appointed as the head of SEBI. Moreover, she is the first person from the private sector to head such an important financial institution of the country.

Mark Mobius, the emerging markets veteran, has been roped in to become a member of the India advisory board of Investcorp. His knowledge of markets and expertise in investments provides an additional unique blend to the board, as stated by Investcorp.

BlueStone Jewellery, a Ratan Tata backed company, looks to raise over Rs. 1,500 crores through its public offering. They have appointed various investment bankers like ICICI Securities, JM Financial, IIFL Securities and Jefferies for IPO purposes. Further, they are looking for a valuation of Rs. 12,000 to Rs. 15,000 crores.

The aviation regulator of India, DGCA, announced that the scheduled international passenger flights will remain suspended for the time being until further orders. On 19 January 2022, DGCA extended the suspension till 28 February 2022, at the request of Indian Prime Minister Narendra Modi, due to rising Covid cases. The suspension period is again extended until further orders, as reflected by DGCA on Monday.

On Monday, the Health Ministry stated that International Travel Guidelines were revised to include some exemptions for people arriving from Ukraine. RT-PCR test reports and COVID vaccine certificates are exempted from the guidelines on humanitarian grounds.

UN General Assembly’s procedural vote to hold a special emergency session on the aggression of Russia towards Ukraine in the UN Security Council was abstained by India. However, New Delhi welcomed Kyiv and Moscow’s decision to hold talks at the Belarus border.

News from the World

The Prime Minister of UK, Boris Johnson, confirmed that visas would be given to the British relatives settled in Ukraine to join them in the UK. It comes as a part of the new £40 million humanitarian packages, including basic necessities and medical supplies. Apart from the supply of dressings, medicines, wound care packs and syringes, visas will also be provided to the immediate family members of UK citizens in Ukraine.

According to research reported by Elliptic, a blockchain analytics firm, the Ukraine government received over $10.2 million worth of cryptocurrency. This comes as a crowdfunding operation to lend support in defending against the war machine of Russia.

US and European Union imposed several economic sanctions on Russia in response to Russia’s war on Ukraine. Experts believe these sanctions are intended to cripple the Russian economy, banking sectors and technological access. This move can suffocate the growth of trade and commerce of Russia.

28 February 2022 was the last day to link your Aadhaar and PAN card with LIC (Life Insurance Corporation) policy as LIC kicks off public offering in March. Linking Aadhaar and PAN with LIC policy is necessary to subscribe for LIC IPO.

With Russia waging war on Ukraine, the world saw a rise in oil prices on Monday. Further sanctions on the Russian economy, removal of Russian banks from the global payment system SWIFT and other factors have led to a tumult in global energy markets. Meanwhile, in India, the Delhi Disaster Management Authority relaxed all Covid-19 restrictions, and Union Civil Aviation Ministry extended ban on international commercial flights.

To know more about the stock market, investment and business, make sure to check out the Angel One blogs.

War often impacts the stock market as a sizeable amount of funds is spent on basic necessities, defence and medical supplies.

The recent war between Russia and Ukraine is bound to impact the global economy. The result is evident with the recent surge in crude oil prices worldwide.