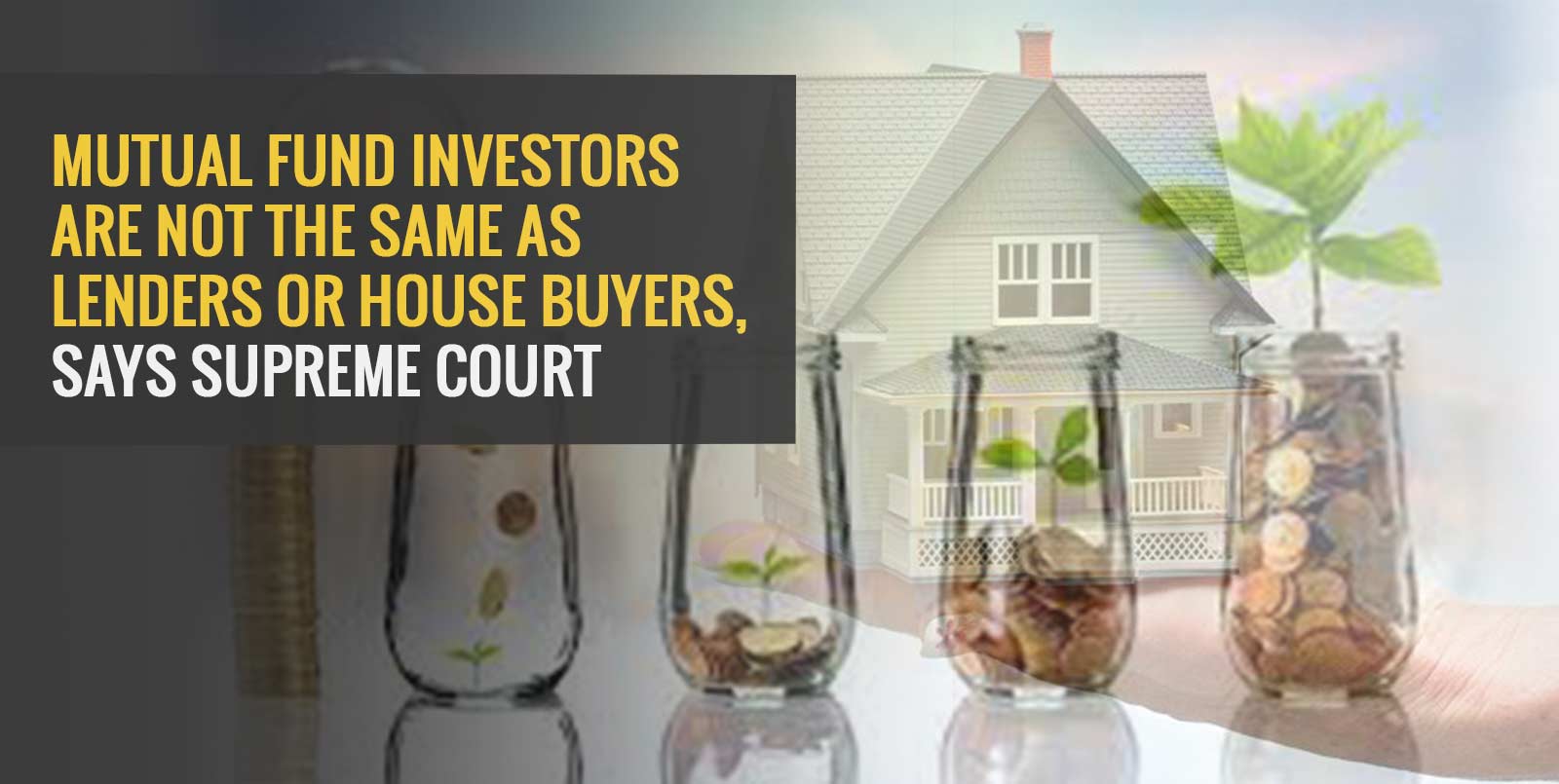 The assertions that mutual fund investors can be equated with debtors or house buyers under the relevant statutes were deemed “unsound and discordant” by the Supreme Court on Wednesday. The observations were made by the Supreme Court in a case that found that trustees must obtain majority unitholder permission before terminating mutual fund schemes after posting a notice outlining the grounds for their intention to wind up debt schemes.

S Abdul Nazeer and Sanjiv Khanna of the Supreme Court of India further ruled that the market regulator SEBI has the authority to conduct an inquiry and investigation when it is warranted and required to determine if the trustees have acted in accordance with their fiduciary duties.

Justice Khanna’s 77-page decision interpreted key clauses of the Securities and Exchange Board of India (SEBI) Regulations on mutual fund winding up, stating that they “rightly establish the line between creditors and unit holders.”

“To equate unitholders with either creditors or house buyers will be unsound and incongruent,” it stated. “Unit holders are risk-takers who are entitled to profits and gains as a result of their investment. They must bear the losses, if any, after taking the assessed risk. Unit holders have no right to a guaranteed return or even protection of their principal. “On the other hand, creditors are entitled to a fixed return based on mutually agreed contracts. Their rate of return is based on interest rather than profit or loss. Creditors, unlike unit holders, are not risk takers,” the report stated.

In this sense, unit holders are on level with firm shareholders, and the Companies Act waterfall system prioritises creditors’ debts over shareholders’, according to the report. “The position of the unit holders is identical. In reality, the premise that unit holders should be treated on the same footing with creditors is implausible,” it stated.

Similarly, it added that the idea that unit holders are treated the same as home buyers under the Code is “equally flimsy and a weak argument,” adding that home buyers pay money to the builder and enter into a contract to purchase immovable property.

Unlike mutual fund investors, home buyers are not exposed to risk or share in wins or losses. Home buyers are treated as creditors under the Code until the ownership rights in the immovable property are transferred to them, but they do not take the risks and are not entitled to profits or losses, as do unit holders who invest in mutual funds without any guarantee of returns and are aware that their investment, including their principal, is subject to market risk.

The Supreme Court’s decision was based on several arguments, including Franklin Templeton’s appeal against a Karnataka High Court order prohibiting the corporation from winding up its six mutual fund (MF) schemes without securing a simple majority of investors’ permission.

Before investing their money, fund managers and senior officials must obtain many permits. They have limitations on the stocks they may and cannot acquire, as well as when they can buy them. These precautions are made to ensure that they do not get ahead of the game or take use of inside information. As a result, the vast majority of them prefer to invest in mutual funds.  Unlike stocks, investors in mutual funds are unable to manipulate share prices and profit at the expense of others. However, the manner in which Vivek Kudva liquidated his Franklin Templeton fund investments exposed the unfair benefit he enjoyed as a board member.

Kudva, Franklin Templeton’s Head of Asia-Pacific Distribution, and his wife Roopa Kudva withdrew Rs. 30.70 crores from the six debt funds just days before they were shut down. Kudva also took his mother’s investments off the table. In its examination, the Securities and Exchange Board of India (SEBI) found that Kudva was aware of the six debt schemes’ unsatisfactory state. Between March 20 and April 3, the Kudva couple withdrew their funds. On April 23, the scams came to an end.

Despite the fact that Kudva did not commit any fraud, his actions may persuade fund institutions to prevent their top executives and directors from leaving during a difficult period.

The compliance officer seeks the consent of all fund managers after senior executives submit a written request specifying which stock and how much they wish to buy. Only then will the key official be able to purchase the stock. The authorization is only valid for seven trading days.

Until the 15-day “cooling period” is finished, every stock that the fund house has traded in the previous 15 days is out of bounds. They are unable to sell the stock for at least six months after purchasing it. Even the senior officials are discouraged from purchasing shares in which the fund manager is most likely to invest. The top 100 equities are the most commonly studied. As a result, all large-cap stocks are practically off-limits for the senior employees.

Since 2015, top officials have also been required to disclose a trading plan detailing the stocks they aim to acquire or sell over a 12-month period.