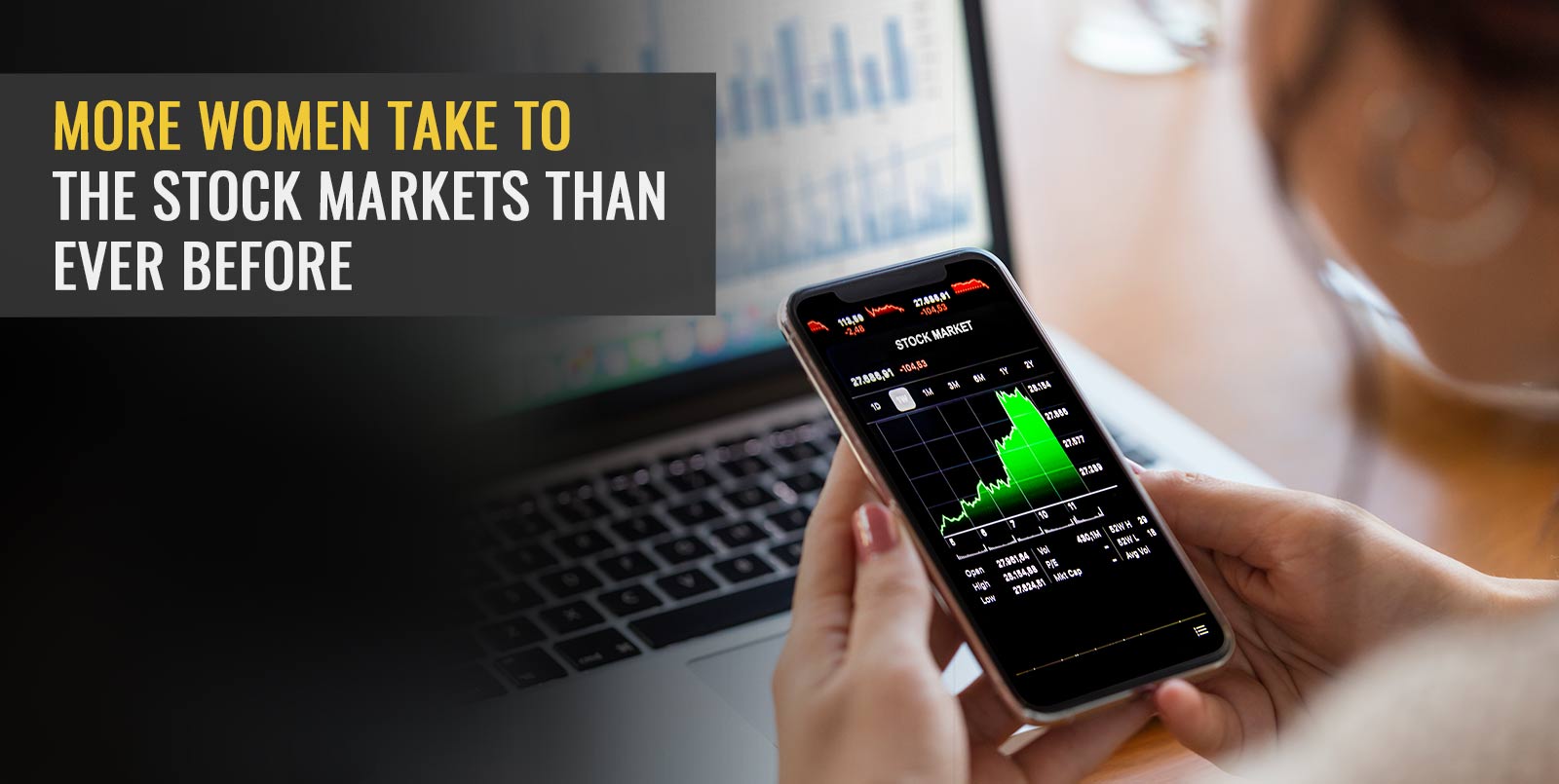 Many brokerage firms have been reporting a substantial rise in demat accounts opened by women in the past one year. Anxiety around finances, worries over employment and the pandemic-induced lockdown have triggered a rising interest among women to try their hand at trading. Typically, the accounts belong to women in the under 30 and 30 to 40 age groups. The lockdown has given women an opportunity to reassess their investments and grow their awareness about investment and trading in the stock markets.

Why have more women taken to the stock market?

Another reason for the rise in demat accounts among women is the easily available online coaching modules on the markets and the ease of use when it comes to trading platforms. The option of an e-KYC (e-Know Your Customer) also made it easy for women to open accounts on online platforms. The work from home option has also helped women leverage time and space for stock market investments. The other reasons attributed to a rise in demat accounts by women are a growth in gold prices and low fixed deposit returns. A recent survey ahead of Women’s Day showed that women in the 18 to 25 age bracket were three times more likely to invest in a high-risk and high-returns asset class such as stocks rather than traditional options like fixed deposits.

When the stock markets crashed in March 2020 following the pandemic scare and rebounded, the attractive valuations ever since and a sustained bull run in the markets has also attracted new investors, many of them women, according to market observers.

The rise in demat accounts by women is in line with the overall surge in new stock market investors ever since late March 2020, when the pandemic-related lockdowns were imposed in the country. According to data from the market regulator SEBI, nearly 6.3 million new demat accounts were opened between April and September 2020, which is a whopping 130 per cent on a y-o-y basis. SEBI data shows that while nearly 7 lakh demat accounts were opened in April and May 2020, the monthly average rose to 18 lakh in January 2021.

The Central Depository Services (CDSL) became the country’s largest depository in terms of active demat accounts, at three crore in 2021. The depository took only a year to add one crore accounts in 2020, while it took between August 2015 and January 2020 to add a crore.

While it is promising that more women have opened demat accounts and have taken an active interest in both investments and trading, Indian women still have a long way to go. The number of women investing in the stock markets is still under the 20-25 per cent range. A 2019 survey by Nielsen and a mutual funds investment firm showed that 33 per cent of Indian women make investment decisions independently. Only 12 per cent of women in that survey which covered eight cities in India, said they made independent choices while investing in stocks, mutual funds or equity as against 31 per cent of men.

However, the performance of the stock market ever since the crash of March 2020 has buoyed investor sentiment, and this includes women who opened demat accounts in the year gone by. As vaccination picks up pace in India, the market, aided by the central bank’s accommodative stance, is expected to touch fresh highs this year. In early February, the BSE Sensex touched the historic 50,000-mark for the first time ever, following the Budget’s focus on capex generation and infrastructure push. In February, India’s stock market turned the seventh biggest in the world and the second-best performer among the leading 15 countries in 2021.

The positive sentiment in India’s stock market may draw more women to pick stocks for investment. Greater awareness, mobile phone and Internet penetration and improved workforce participation will ensure enhanced interest in the stock markets for women. Women in India should take heart from a much-cited analysis of 2800 investors that was conducted by a noted Professor of Behavioural Science — returns for women investing exceeded returns for men by 1.8 per cent. As the stock markets continue to perform well, with brokerage firm Morgan Stanley forecast of Sensex touching 55k, more women are likely to participate in the good run that the markets in India have had.

There can’t be a better time than the occasion of International Women’s Day to make your foray into stock market trading and smart investments. No matter which stage of your investment and trading journey you are in, Angel One’s Smart Money has structured modules for beginners, investors and traders. You can also tap into podcasts to listen on the move and grow your knowledge and wealth. Go ahead and register for free on Angel One’s Smart Money section for a comprehensive understanding of the financial markets.