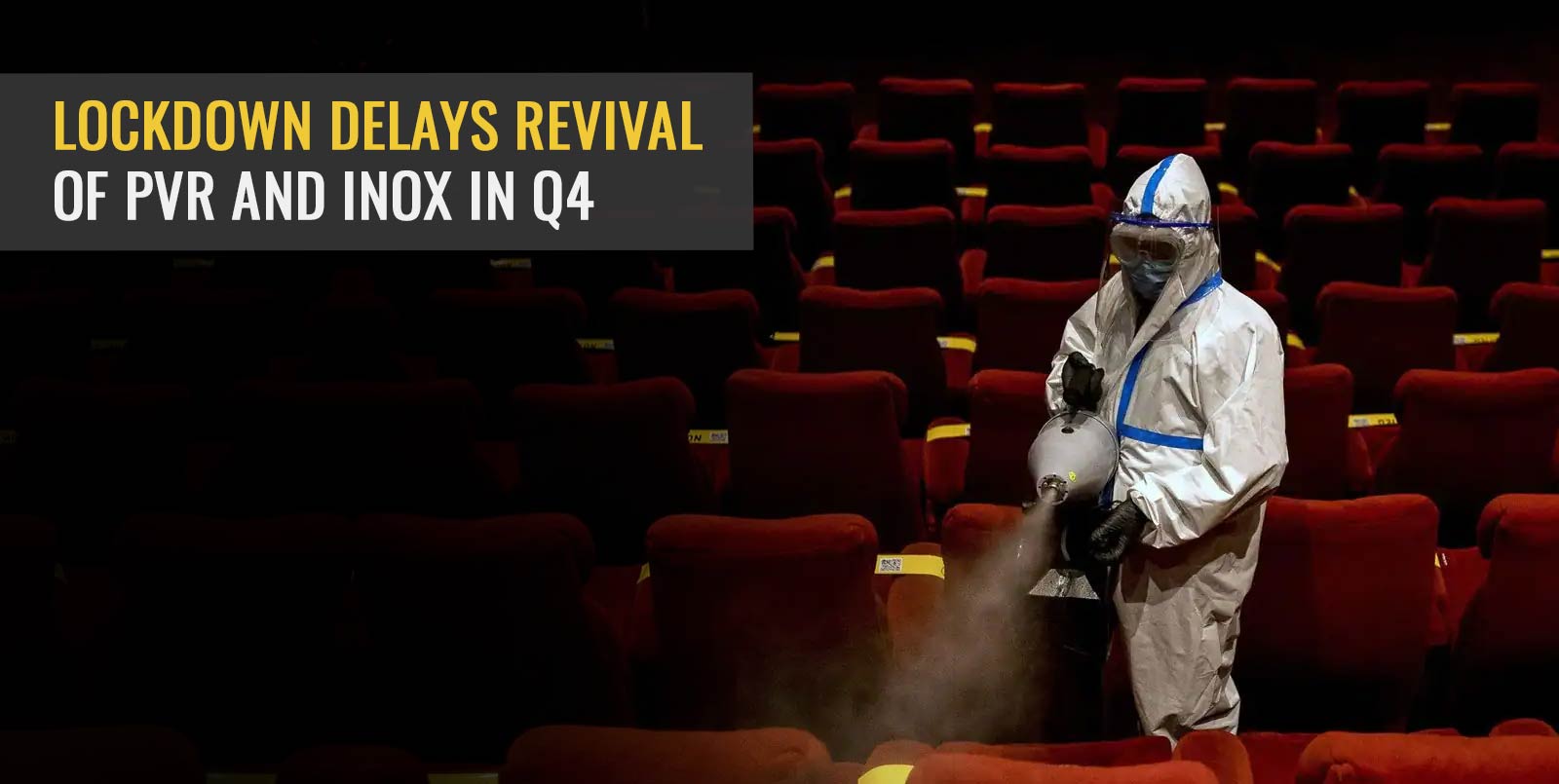 Coronavirus’s second wave has slowed the revival that India’s multiplex companies  – PVR Ltd and Inox Leisure Ltd  –  had just begun to witness. The March quarter of 2021, hereafter referred to as Q4FY21, had started off on a hopeful note for cinemas across the country. Theatres saw a greater-than-expected response to the Tamil movie Master which launched at the turn of 2021. Certain regional content releases were also met with a decently-sized audience. However, the overall lack of big-budget Bollywood releases prevented a complete rebound in footfall during the prior quarter.

In accordance with this optimistic turn of the new year, the respective revenues for Inox Leisure and PVR Ltd were also expected to grow in Q4FY21. Now, however, they have been calibrated to be considerably lower year-on-year. In fact, both companies will be reporting losses at an EBITDA (earnings before interest, tax, depreciation, and amortization) level.

The JM Financial Institutional Securities Ltd reported on the ongoing scenario that theatres across India are witnessing. As per their analysts, the operating losses for multiplexes this quarter are expected to be lower, even though there has been a sharp increase in their overhead expenses such as rental costs. Overheads were increased due to the predicted revenue trajectory that multiplexes seemed to be heading towards at the beginning of the new year. Cinemas were expected to reopen and remain open by this time around. However, the opposite has been the case.

Hence, as the brokerage firm that analyzed the operational losses for both PVR Ltd and Inox Leisure Ltd, JM Financial Institutional Securities reports these losses to be at the scale of ₹62 crores and ₹100 crores respectively. Quarter on quarter this is roughly 16–27% lower. To be certain, the increase in the spread of COVID-19 has kept sentiments muted regarding the shares of multiplex firms since lockdown restrictions directly weigh on footfall. However, vis-à-vis a 5% gain in Nifty 500, the stocks for both PVR and Inox Leisure in 2021 have dropped by around 13% and 4%, respectively.

One big-budget release — Radhe: Your Most Wanted Bhai starring Salman Khan — is set to release across multiple platforms and in theatres globally on the 13th of May. If the ongoing trend picks up in the short term, then this movie is likely to become a damper for Indian multiplexes. However, some analysts simultaneously claim that this big production will have a minimal impact on multiplexes.

According to one source from Elara Securities (India) Pvt. Ltd, the movie’s release will garner a select medium- and small-budget films to consider directly releasing across offline and online platforms. Since multiplexes, however, have hardly opened in big cities and towns due to the ongoing second wave, the movie’s impact on them will be minimal. For such multiplexes, a big budget film being released in the middle of the lockdown is akin to another film opting for a direct digital release.

It is not a shocker that if circumstances were normal, as they were beginning to get a month ago, consumers would prefer watching movies in theatres directly. Warner Bros had adopted a similar worldwide release strategy like Radhe when it came to films like Tenet, Wonder Woman 2, and Godzilla vs. Kong. However, since it realized the potential cinemas in India could have on revenue, Warner Bros released all movies exclusively in theatres and saw them do well despite the pandemic.

People seem to prefer watching movies in the theatre as seen with some of the bigger productions released worldwide earlier this year. However, the business for Indian multiplexes continues to remain on shaky ground for the ongoing and future quarter with the government tightening down on mobility restrictions. During this interim period, investors should keep an eye out on how the rental expenditures shape up for multiplexes like PVR Ltd, and Inox Leisure. In the June quarter, analysts expect performance for these two to weaken further, or stay as is. However, a silver lining remains with the hope that vaccinations will be delivered at a faster pace and improve consumer confidence and ease up restrictions.