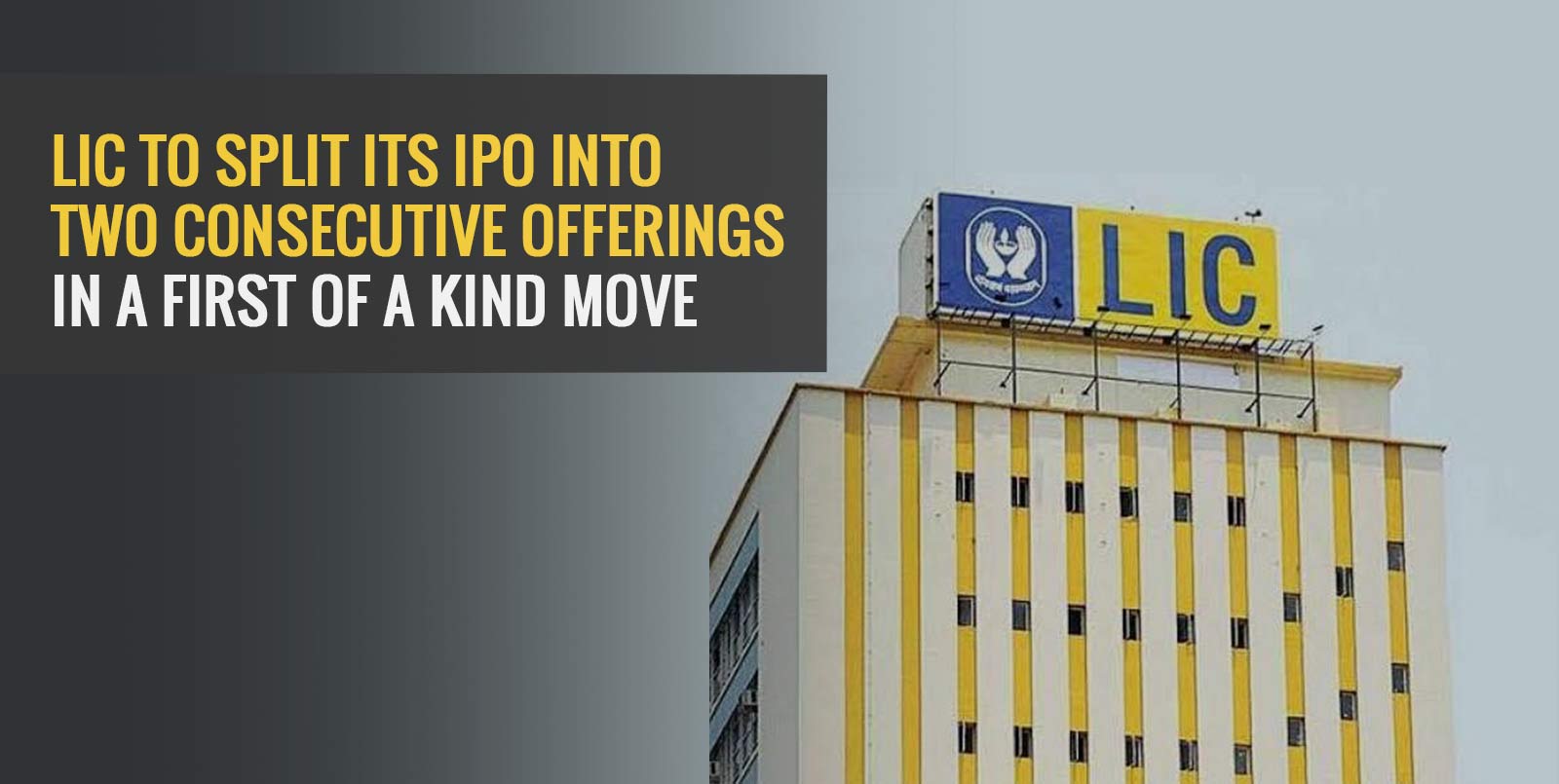 The government-owned life insurance giant LIC plans to split its IPO into two consecutive offerings with a few months gap. This is because this IPO, through which the government expects to raise around Rs. 1 lakh crores, may be too massive for the market to absorb in one go.

If the above plan is successfully implemented, this will be a first-of-a-kind IPO in India. In another first-time move by a government-owned company in India, LIC plans to offer pre-IPO share placements to cornerstone investors and marquee asset managers.

Now, let’s take a look at some essential details of the upcoming LIC IPO.

In the Union Budget 2021, GOI announced several steps and legislative decisions to list the mega IPO sometime this year. Unfortunately, the Covid-19 pandemic has delayed the plans with several roadblocks. The LIC IPO launch date 2021 is slated to be sometime during the second half of this fiscal year (sometime around Diwali, according to an IANS report).

As per the Finance Bill 2021, the authorised share capital of this IPO is expected to be around Rs. 25,000 crores, with 2,500 crore shares worth Rs. 10 each. As per tender documents by DIPAM, the GOI will sell part of its stake in LIC when it lists its shares on stock exchanges.

As per a recent IANS report, the central government is making all preparations for the IPO. The Centre has invited bids for the following positions:

LIC has not announced the date for submission of DRHP (draft red herring prospectus) yet. However, following its filing, we will be able to know specific details of this issue like price band, IPO size, valuation, opening and closing date etc.

Decision to Split the IPO

With so many IPO offers in the country already closed, officials believe that a large number of investors’ funds have already been absorbed by the market. That’s why decision-makers have announced to split the Rs. 1 lakh crores IPO into two consecutive offerings with a gap of a few months. This will help the LIC IPO become more successful.

The other option being planned is to opt for share placement before the IPO, a move that government-owned companies usually don’t opt for. Potential investors for the pre-IPO offering will include cornerstone investors, marquee asset managers, sovereign wealth funds and private equity funds.

This will likely accumulate substantial funds ahead of the IPO that may be the largest in India’s history.

Decades after the privatisation of the industry, LIC still maintains the top spot with a market share of 69% in FY2020.

According to IRDA (Insurance Regulatory and Development Authority of India), LIC collected first-year premiums of Rs. 1.78 lakh crores in the current fiscal year alone. This amount is 25.17% higher than that of the previous year. The total assets of the company stand at Rs. 31 lakh crores.

The largest IPO in India’s history has been in the works for some time now. The combination of the equity shares belonging to LIC, the government-owned insurance giant and increased interest in IPO shares makes it a great investment opportunity.  Moreover, all those involved in preparing the IPO are taking every step to make this event a success. If you are looking for long-term gains or quick listing day gains, you may want to invest in the LIC IPO. However, we always recommend that you conduct proper research before investing, as equity shares are always subjected to market risk.

The date for the opening of LIC IPO has not been announced yet. Once LIC files DRHP for its IPO, we will know the opening date.

The exact IPO size or price band has not been announced yet. However, according to India’s Chief Economic Adviser, this IPO may gain a total of Rs. 1 lakh crores.

With over 25 IPOs having gathered around Rs. 70,000 crores in 2021, LIC thinks that the IPO may be too massive to be absorbed by investors in one go. Hence, they have decided to split this IPO into two with a gap of a few months’ time between them.