On the 28th of February, the Ministry of Statistics and Program Implementation (MOSPI) released the GDP estimates for the 3rd quarter ended December 2017. Of course, these estimates are subject to revision at a later date. As per the second advance estimates for the third quarter, the GDP growth stood at 7.2%, which is higher than the revised estimates for the 2nd quarter by nearly 70 basis points. However, the full year GDP growth for FY-18 will be down to 6.6% as compared to 7.1% in the fiscal year 2017. 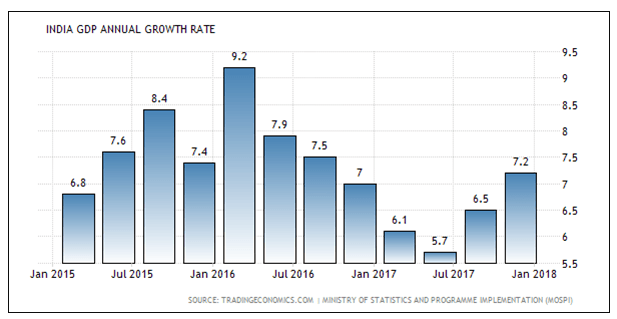 The good news appears to be that the trend seems to have turned decisively up and the Q3 GDP growth has moved up to 7.2% from a low of 5.7% in the first quarter. The fourth quarter will at least have to maintain growth at these levels to ensure that the full year GDP growth at over 6.5% is maintained. It may be recollected that in the revised methodology, GDP is calculated with reference to the base year 2011-12.

Is India still stuck at the $2 trillion GVA level?

According to the advanced estimates, the GVA (Gross Value Added) for the full year 2017-18 is likely to be Rs.130 trillion. At the current exchange rate of 65/$, this works out to an annual GVA of $2 trillion. India appears to have stagnated around the $2 trillion level as a weaker rupee is largely negating the growth effect in dollar terms. The reason is that there is still too much dependence on government initiative and government spending. To understand this look at the difference between the GDP and the GVA! The GVA measures the GDP without the impact of taxes and subsidies. When these two are removed the full year growth estimate falls from 6.6% GDP to 6.4% GVA.

GDP for the full year 2017-18 is likely to be around Rs.167.52 crore (after adding the impact of taxes). That translates into a full year GDP at $2.58 trillion. Obviously, India will have to consistently grow at a much higher rate to actually narrow its gap with larger economies. In macroeconomic parlance a GDP level of $3 trillion is considered to be the tipping point for transporting the economy into a higher plane.

How are the specific sectors driving GDP growth in 2017-18?

The GDP estimates for the third quarter is surely showing some green-shoots of recovery but we will have to wait for the final data and the full year data to get a clearer picture. On a full year basis, GDP for 2017-18 is likely to be at least 50 basis points lower than the previous year.