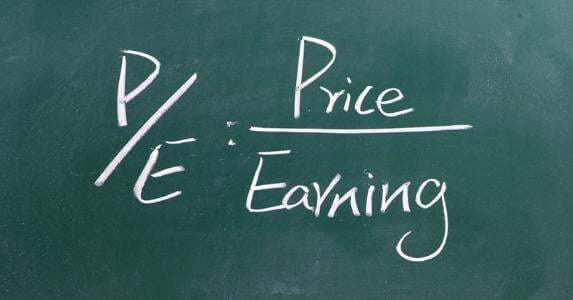 The price-to-earnings ratio– P/E ratio for short– can be calculated on the basis of a particular stock’s current price divided by its EPS or earnings per share, usually over the preceding 12 months or the Trailing Twelve Months (following 12 months). Most P/E ratios are indicative of the stock’s present price as compared to its earnings over the last 12 months. For instance, a stock that currently trades at 40 rupees per share and comes with an EPS of 2 rupees will show a P/E of 20.

This would be similar to another stock currently quoted at 20 rupees per share and has an EPS of 1 rupee. Thus both stocks would have similar P/E valuation and investors would stand to pay 20 rupees for every rupee earned. However, should the case be such that a stock that is earning 1 rupee per share trades at 40 rupees a share, the P/E ratio would be 40 and the investor would have to shell out 40 rupees for a paltry earning of 1 rupee. This obviously is unacceptable but several factors could help mitigate this problem of overpricing.

Secondly, it also needs to be borne in mind always that average P/E ratios vary from one industry to another. The typical scenario is that stocks of those companies that are stable and mature and have moderate potential for growth usually have low P/E ratios. On the other hand, companies belonging to younger, quicker-growing industries have higher P/E ratios. Thus, while comparing P/E ratios of two companies before making an investment, one needs to make a comparison of companies operating in an industry with similar characteristics. Purchasing stocks with lower P/E ratios could end up in a portfolio that would be loaded with just utilities stocks & would inevitably lead to poor diversification and exposure to unnecessary risk.

However, stocks that have higher P/E ratios can also make good investments. For instance, a company with a P/E ratio of 40 with an earning of 1 rupee per share in the last 12 months is expected to make an earning of 4 rupees a share, next year. This implies that the company most likely would record a P/E ratio of 10 in a year’s time, and this would be very cheap. It pays to remember that when you analyze P/E ratios you need to work out the premium payable for the company’s present earnings, and then decide if its expected growth can warrant such premium.