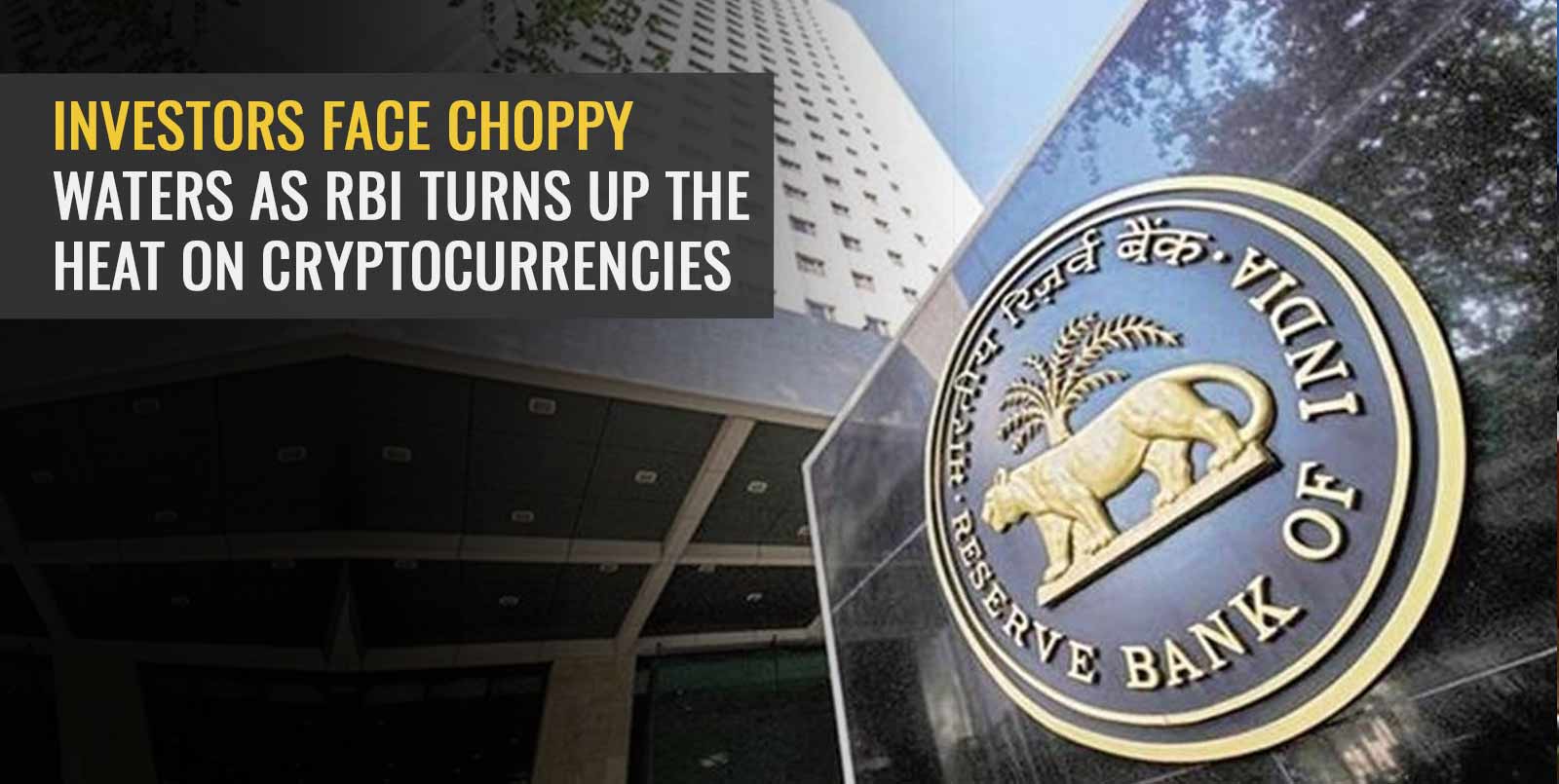 There is no respite for cryptocurrency holders in India. Unofficial estimates by three major cryptocurrency exchanges put the total number of crypto investors to anywhere between 60 lakhs to a crore with holdings crossing a whopping Rs 10,000 crore. Despite their strong and thriving presence, the Reserve Bank of India seems dead set on pulling down the shutters on the operation of cryptocurrencies in India.

Reportedly, the RBI has informally reached out to several large private banks cautioning them to review their cumulative monetary exposure and to “rethink” the business with cryptocurrency linked firms. The private banks who have confirmed RBI’s hostile moves include the likes of ICICI Bank, Yes Bank, HDFC Bank and Indusind Bank.

This inimical move by the RBI comes as a sucker punch for crypto investors. Investors thought that they had seen the last of RBI’s antagonistic actions after the Supreme Court in March 2020 overturned the central bank’s April 2018 ban on banks from processing cryptocurrency-related transactions.

The apex court in its judgment had pointed out that the regulator’s crackdown on digital currency was not proportional. The court stressed that while the RBI is competent to regulate digital currencies, its action had to be proportional; that is its instructions had to be designed to realise a particular policy objective. In this case, it meant, the efficient monitoring of cryptocurrencies and addressing risks specific to the trading of bitcoins.

Investors cheered the judgment hoping that it will pave the way for smooth digital currency trades in India.

However, the relief that crypto investors could draw from the Supreme Court’s judgment was short-lived. The central bank had already taken a strong stance against trading private digital currencies in India. Its adverse stand is evidenced from the Cryptocurrency and Regulation of Official Digital Currency Bill, 2021 which was to be introduced in the budget session of the Parliament this year. It seeks to prohibit the trading of all cryptocurrencies in India and put in place a regulatory architecture for the operation of an official digital currency.

Can the RBI be dissuaded from the warpath?

Legal experts have time and again pointed out that the RBI’s move aimed at banning cryptocurrencies can have counterproductive effects pushing the bitcoin, dogecoin, litecoin and ethereum market in India underground. Regular, law-abiding investors intending to engage in above-board kosher transactions will be forced to operate in illegal and unsupervised markets.

What’s more, the original fears of the central bank that digital currencies can be misused for terror financing and money laundering are in no way lessened even when a national digital currency will be launched, which is just as susceptible to be used for illegal terror activities.

Across the globe, countries like Russia, Australia and Japan have not blocked trading in cryptocurrencies but instead have actively worked to make them part of their economy. In 2014, in Japan, a cryptocurrency exchange Mt Gox suspended bitcoin trading, shut down its website and told its customers that close to 8,50,000 bitcoins valued at more than $450 million then had been stolen. This could definitely have elicited a knee-jerk reaction from the Japanese government resulting in a blanket ban on trading digital currency. Instead, the government strengthened the regulatory framework and made way for greater transparency and accountability in the business.

What should the investors do?

As per news reports, inter-ministerial discussions have considered and greenlit an exit window of 3-6 months which will permit investors to sell their investments before the ban is put in place.

Another possibility is for Indian investors to transfer their holdings-as gift- to kin or friends living overseas before the ban is imposed. However, legal bigwigs indicate that the overseas party to whom the digital currency is transferred will be liable to pay tax on those assets. There are also chances that the revised bill could prohibit the option of transferring digital coins and lay down that currencies be sold in India.

The last option being explored by digital currency investors is to shift their holdings to self-custody wallets. Bitcoin owners would essentially have to move their digital portfolio to a hard wallet, which will be a device on the lines of a smart card or a USB stick. The wallet can be safely stored away at home. The only catch here is that if the digital coins are transferred from a wallet on an Indian exchange to hard wallets, government authorities can track down the trail of the funds.