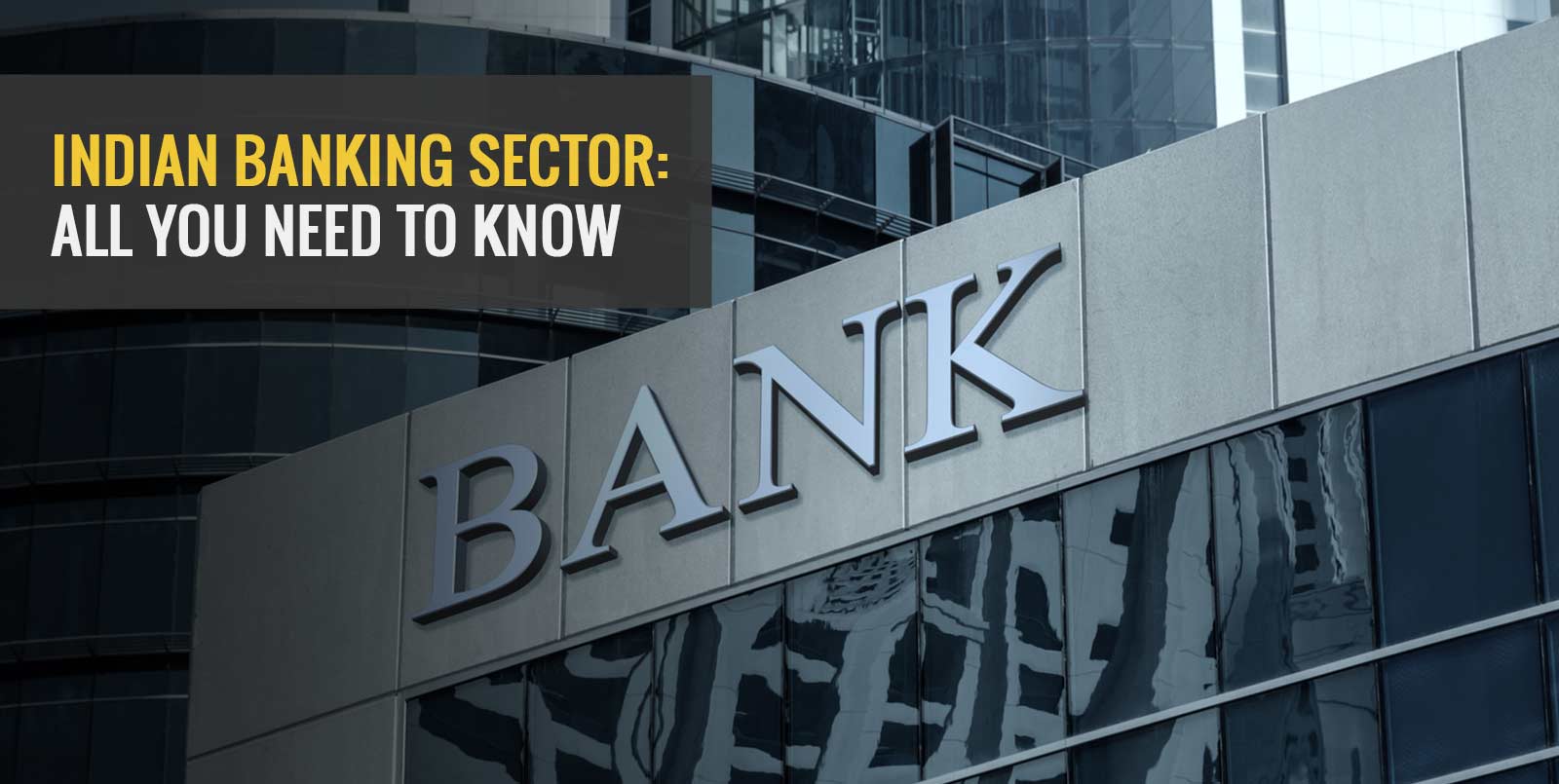 The Banking Sector is an integral part of any economy. Rather it is impossible to conceive an economy without banks. In simple terms a well-functioning financial system is fundamental to a modern economy, and banks perform important functions not only for the economy but also for the society. To build up a business three important aspects are Land, Labour and Capital (though in the new age business Land may not be that important). And Banks since ancient days have played an important part in arranging the capital. Whatever be the scenario in the economy – upturns or down turns, banks have been playing an instrumental role in arranging capital and lending money. While the old Banking business was only considered as lending money and earning interest on it, the new age banking has been very vibrant. With the introduction of digital banking things are changing fast and new players have emerged on the Canvas. While the new kids on the block are making noise – it does not take away the shine away from old Banks. People may argue that the old banking systems may not sustain after a few years. However we believe, while the new age technology may be a challenge – it is difficult to challenge a system that has been sustaining throughout the economic peaks and troughs.  Let’s take a look at how the Indian banks are poised on the important parameters like Net interest Margins (NIM), Current Account and Saving Account (CASA) deposits and last but not the least the Gross Non-Performing Assets (GNPA) at the end of FY21. The analysis furthermore becomes important owing to the fact that there has been tremendous pressure on the Indian Banking system on the back of Covid-19 pandemic impacting the business environment. WE are presenting the Indian Banking scenario with different charts. To make it easier for the readers we have divided the blog in two parts. While the first part speaks about the operational performance on the basis of NIM, GNPA and CASA. The second part speaks about the Banks ranked on the basis of market capitalization. When we prepared a list of top 10 Indian Banks, we filtered the top 5 from Public Sector Undertaking (PSU) segment and Top five from the private sector segment. Let’s first have a look at the operational performance of Indian banks.

The banking sector growth is largely dependent on GDP growth which eventually is dependent on different macro factors and parameters. And with the past one year being significantly hit by the Covid-19 pandemic the short term impact on the growth parameters was visible. In terms of the lending and deposit numbers, the lending growth has got affected in FY21. The following chart clearly shows the lending growth has declined and deposits rate have increased. 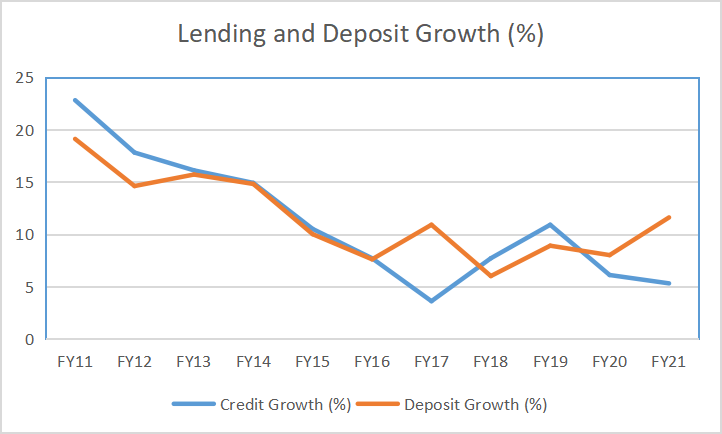 This brings us to the most important parameter to Analyse banks – rate at which it accepts deposits. The CASA deposits are considered to be the lowest cost for Banks and hence any increase in the same saves their cost. Naturally the cost of funds has overall declined and hence in the short run it may not be seen as a benefit, the long run impact is surely positive. The following charts how the banks have managed to maintain their CASA.

While we have segregated the banks in PSU and Private, for the easier review the private banks are further categorised in Private Banks and Old Private Banks. Let’s have a look at the PSU Banks first.

As regards the private players, Kotak Mahindra Bank has got the best of CASA. Rather the 60 percent CASA is much higher than few of the PSU Banks. It is mainly on account of digital play and the higher saving bank interest given by the Bank. Even the rise of more than 400 basis points over FY20 is a positive factor. The Second best has been IDFC First with 57 percent CASA in FY21. This is an increase of more than 2000 basis points over FY20. Rest the other larger players like HDFC Bank, ICICI Bank and Axis Bank have shown marginal improvement.

As regards the Old private sector Banks, there were a few challenges like fragile portfolio and reach. Still all the old private banks have managed to post good growth. Federal Bank and Karur Vysya Bank score higher here.

The performance of the banks directly depends on the earnings it makes out from the lending it has done. And this means the difference it makes between borrowing cost of funds and at the rate it lends. Net Interest margins is a prime parameter to look at.

In case of NIM of PSU banks, almost all the banks have NIM less than 3 percent. It ranges between 2.1 to 2.7 percent. Bank of Maharashtra is the one having 2.7 percent (highest in PSU Banks). If we take a look at the chart, except Bank of India all banks have managed to show improvement or at least managed to sustain margins in FY21 compared to FY20.

As regards the Private Banks, it is Bandhan Bank that has got the best of NIM at 7.3 percent. However it had an advantage of being a micro finance company. Further noticeable factor is, in FY21 its NIM declined as compared to FY20. As regards the other players, the range is similar between 3 to 4 percent.

In the case of old private banks, only DCB had witnessed decline on the NIM front in FY21 as compared to FY20. Rest of the pack has shown marginal improvement on the NIM part. In the above chart CSB Bank has witnessed the best of improvement in FY21.

While the lending growth is good and interest earned on the same is also good, we must focus on the asset quality of a bank. And the scrutiny is more important in the current scenario owing to the Covid-19 Pandemic scenario.

With the Covid-19 Pandemic affecting the one and all on the globe, the banking system had to alter a few of its recovery processes and moratorium was provided to corporates and even the individuals. Despite this the NPA problem was expected to be there. The stress was visible in FY20 (Q4FY20) and even in FY21.

If we take a look at the FY21 scenario of PSU Banks, there is marginal improvement for few. However the numbers are still above the tolerance levels. From the chart below it is visible that there are still five banks having the Gross NPAs over 10 percent mark. And in the case of PNB Gross NPA increased in FY21. 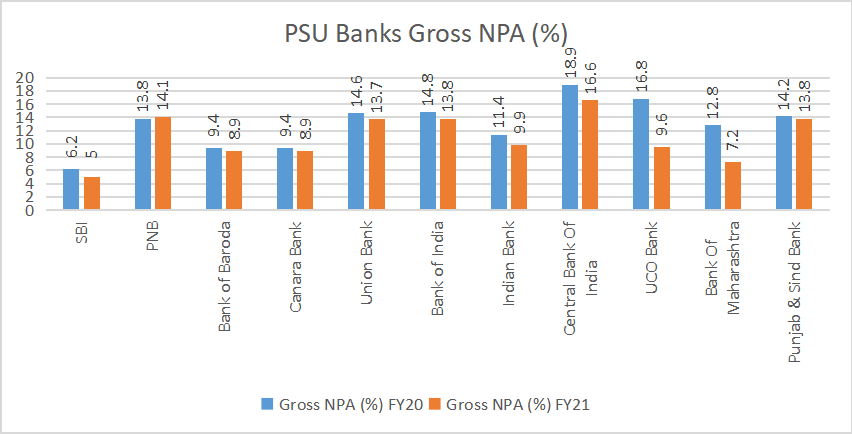 Though the smaller ones like Uco Bank and Bank of Maharashtra have shown improvement, they were under stringent surveillance. Rest SBI has emerged as one strong player and as expected the investors were quick to reckon the same. The stock has provided good movement on the bourses. 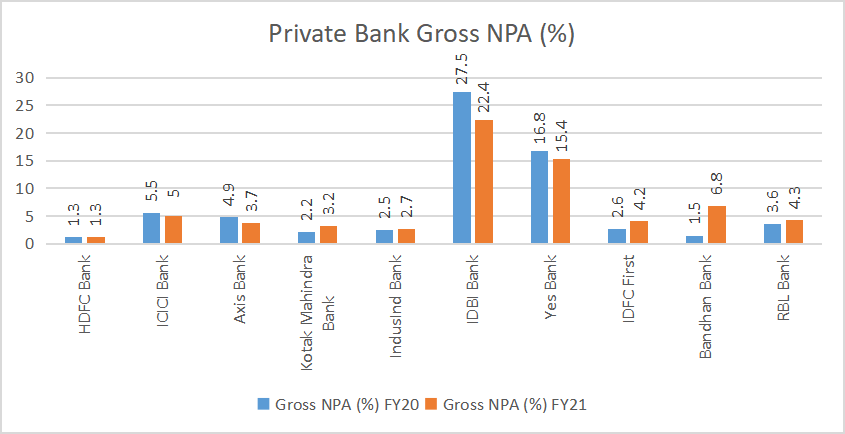 As in the case of private banks the NPA scenario is always managed well. However, a Few poor performances were seen. IDBI Banking owing to exposure to few stressed sectors has witnessed the worst of the GNPA. Even Yes Bank has been a poor performer owing to the corporate Governance issues. Rest all have managed the books well. Bandhan Bank And RBL Bank witnessed increase in GNPA for FY21 as compared to FY20. However the scenario in retail space and Micro finance has been difficult and hence marginal rise was anyway expected. 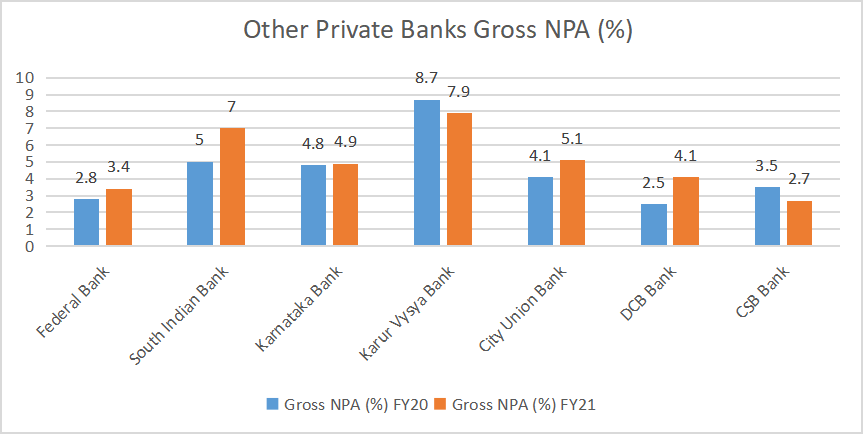 As in the case of old Private sector banks, Karur Vysya has got the highest GNPAs at 7.9 percent. Only positive is it has declined marginally in FY21 as compared to FY20. Even South Indian Bank has been the poorest of performers and worst is the GNPA increased to 7 percent in FY21 as against 5 percent in FY20. No wonder both stocks have under performed the sector.

The above charts show how the Indian Banking sector has performed on three important parameters in FY21. In our Second part of the Blog, we would write on top banks on Market capitalisation and what to expect in FY22