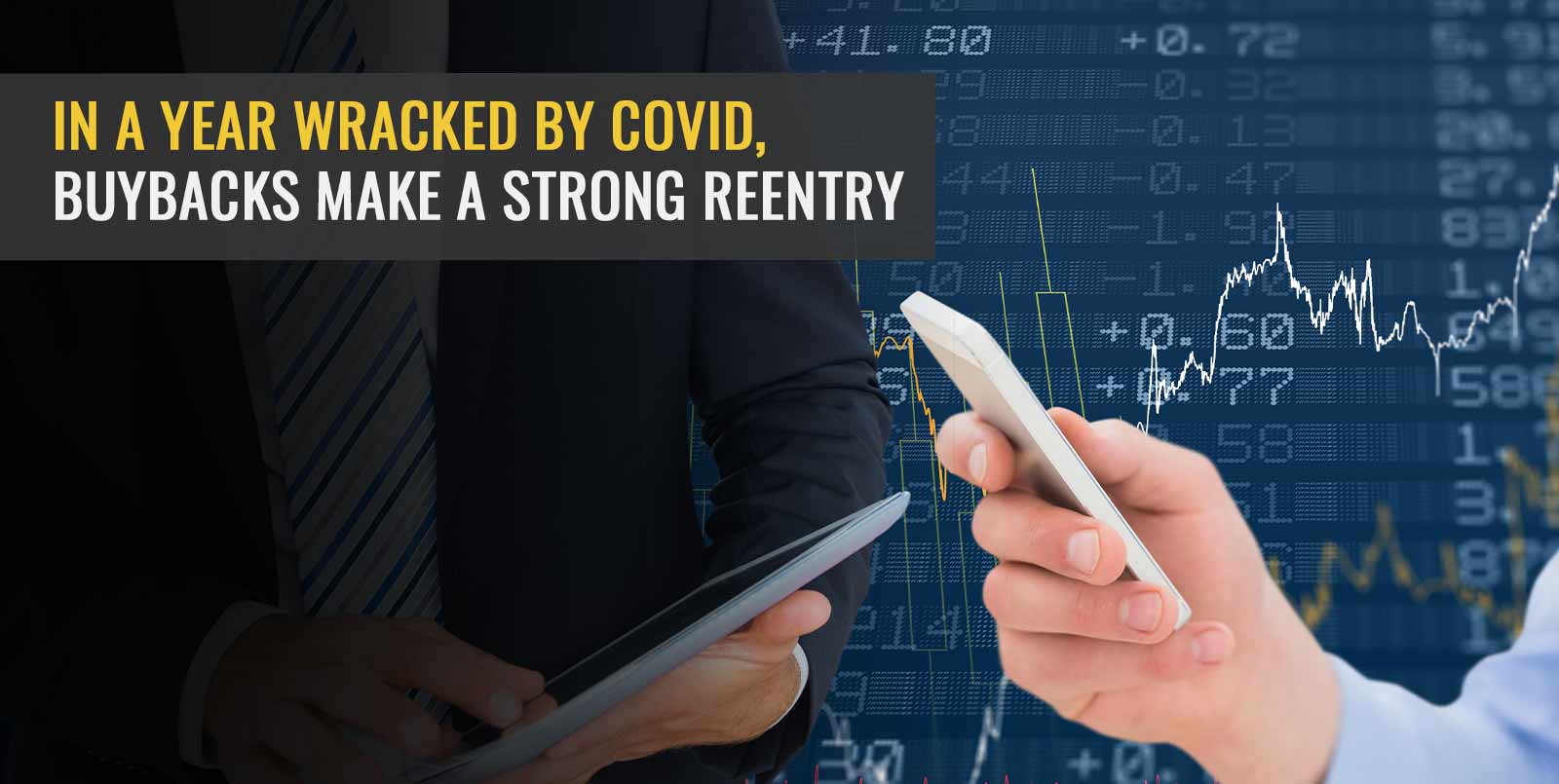 Buybacks are back in action. Data released by a market research firm states that 61 companies in FY21 offered to buy back shares worth Rs 39,295 crore. Of these buyback offers, the largest ones came from tech companies, namely, Tata Consultancy Services and Wipro. Both the companies made offers worth Rs 16,000 crore and Rs 9,500 crore respectively. Interestingly, 23% of the total buyback offer made in FY21 came from PSUs.

While private and public companies both made buyback offers, the signal emanating from the two segments is quite different. When private tech companies opt to buy back their shares instead of channelling those funds towards organic or inorganic expansion, it is symptomatic of the economic insecurity embedded in the business ecosystem. On the other hand, buybacks by PSUs are part of a larger game plan of the government to meet its revenue targets. In a year marked by a black swan event that has upended all the best-laid plans, the government will most likely continue to employ buybacks as a strategic tool to bridge the widening fiscal deficit or perhaps use them to garner funds for economic growth.

Given that this year and the year before it have been wracked by the pandemic, it is obvious to one and all that business activity has ground to a halt; that appetite for capital investments has waned and that many listed companies are expecting a difficult quarter or two where their top line would take a toll. In such an inclement investment climate, tech companies opting to stay away from acquisitions when the future economic outlook seems muted or bleak is welcome.

What’s more, when private companies go in for buy-back they improve several financial and valuation metrics like earning per share and return on capital employed for their shareholders. The same logic is applicable to PSUs, where minority shareholders are better placed after the buybacks.

Why buybacks appeal to the government

As things stand, the central government is busy trying to mop up enough funds to help it overcome the economic disaster unleashed by the pandemic. Over the course of FY21, the government borrowed Rs 12.80 lakh crore from the market and plans to borrow Rs 12.05 lakh crore from the market in FY22 to help it tide over the many challenges that Covid has thrown its way. However, for now, the going is far from good. As the health infrastructure in the country continues to crumble, there is a strong possibility that the strict lockdown imposed by many states could continue for longer consequently hurting the economy as well as the central government’s revenue stream.

Naturally, the government wants a war-chest at the ready when it comes to fighting Covid and the one non-tax revenue source that can be readily tapped into is buybacks and dividends from PSUs.

Between FY16 and FY20, the government has received Rs 40,500 crore from PSUs as consideration for share buybacks. Between FY15 and FY19, PSUs have channelled Rs 2.04 lakh crore into the government coffers in the form of dividend payouts.

For the governments, buybacks are a great way of raising funds without going through the bureaucratic hassles of initial public offers, follow on public offers and offer for shares. Before acting on a buyback offer, the government has to clearly chalk out the extent to which it is willing to reduce its stake in the PSU. Time and again the government has been found wanting on this front. Time and again it has failed in meeting its set disinvestment target. For instance, for the year FY21, it set an aggressive target of Rs 2.1 trillion divestment. By March this year, the government had on the whole only managed to raise Rs 32,835 crore.

This isn’t surprising. Over the years the government has consistently underperformed in meeting disinvestment targets. This year Finance Minister Nirmala Sitharaman has unveiled a bold, reform-oriented privatisation policy under which the government will be exiting all sectors except four strategic ones. The hope this time around is that, unlike previous years, the government will come through on its agenda and privatise several PSUs. This will help in the mobilisation of untapped assets for the government. Additionally, it will liberate PSUs from a bureaucratic chokehold permitting them to restructure their operations and internal mechanisms to take on new challenges in an ever-evolving global business dynamic.