Nearly 7% of the current Indigo flights are grounded because the Directorate General of Civil Aviation (DGCA) all A-320 Neos fitted with PW1100 engines beyond ESN 450 to be grounded with immediate effect. This announcement was made by the DGCA citing safety reasons after repeated engine problems were found. PW engines are manufactured by Pratt & Whitney of the US, which is a division of United Technologies. The entire decision was triggered by a mid-air engine failure of an Indigo flight. How does these impact operations of Indigo? Typically, an airline operates the same aircraft up to 8-9 times during a day. So the grounding of 11 aircraft will mean that nearly 90 flights of Indigo will have to be cancelled per day. That amounts to a capacity loss of nearly 8-9% of Indigo’s exiting flying capacity. In India, A-320 Neos are predominantly used by Indigo and Go Air. How will this impact Indigo?

There are a large number of flights that have been cancelled…

Considering that Indigo runs nearly 1000 flights per day, the actual flight cancellations will be around 80-90 flights per day on an average. Of course, this could number could eventually reduce as Indigo is able to put its other aircraft to better use. Pratt & Whitney is already on the job of rectifying the engine errors but it has already confirmed that the first rectified deliveries will only be possible by June 2018. That means this problem for Indigo will continue at least till the end of June this year. 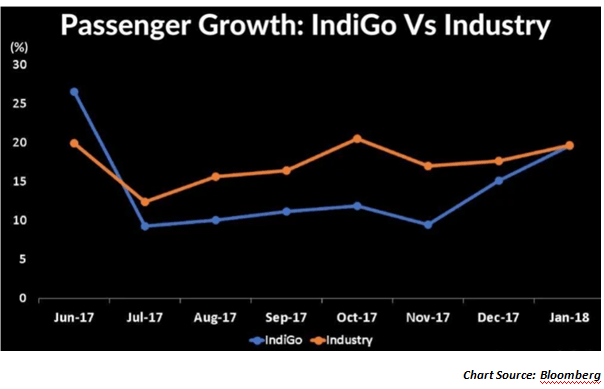 As the above chart depicts, Indigo was just about catching up with the other players in terms of passenger growth. This ban on the A-320 Neo engines and the grounding of 7% of the flights mean that the passenger growth of Indigo may falter in the months to come. That could be the immediate challenge for Indigo. Also, it needs to be remembered that between October 2016 and Jan 2018 the market share of Indigo fell by over 290 basis points from 42.7% to 39.8%. This was largely due to other players like Spice Jet, Go Air and Vistaara picking up more market share. 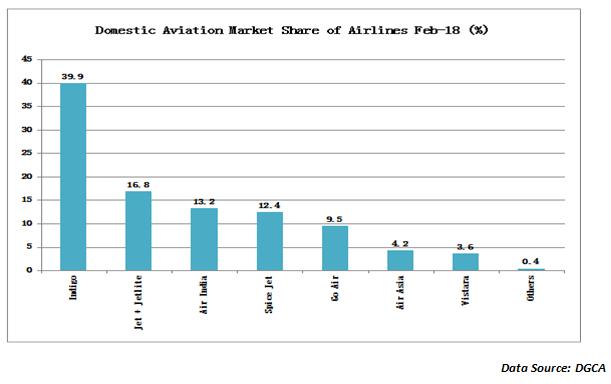 Market share may be hit but what about profitability?

The good news for Indigo could be that while the market share will take a hit, the profitability may not really take a big hit. Obviously, the airlines like Jet and Air India who have the spare capacity to benefit from the falling market share of Indigo will stand to gain. Indigo has already lost market share to Air Asia and Vistaara and that trend will get accentuated in March. But what happens to Indigo’s profitability in the coming quarters?

Prima facie, it does look like there should be an impact on the numbers of Indigo. Consider these statistics. An average aircraft has about 40 rows with 6 seats with a total capacity of around 240 seats per flight. Assuming a conservative Rs.3000/- per ticket on an average it translates into a loss of Rs.7.20 lakhs for each flight missed. A typical aircraft makes about 9 rounds in a full day and that will mean a loss of about Rs.65 lakhs per aircraft per day. Considering that the DGCA has grounded 11 aircraft of Indigo, this translates into a daily loss of Rs.7.10 crore. Even if this ban was to last for just 1 month, this loss will translate into Rs.213 crore per month. That is huge by any standards!

But in reality, the financial hit may not be really big?

There are 4 reasons why the financial hit of the flight cancellation may not be too steep. Let us look at each of them…

Last, but not the least, Indigo may be fortunate that the bad engines did not culminate in a crash The cost and the image loss of such an eventuality may have been much bigger and steeper than the loss that they are currently incurring.