Infosys has been in the news for all the wrong reasons in the last couple of years. First, there was the major concern over the company ceding leadership position in the industry to TCS. That gap (at least in market cap terms) has widened in the last couple of years. Secondly, Infosys like most IT firms has operated in an extremely difficult global environment when the traditional BFSI model was going out of fashion and IT spending was moving digital. Lastly, the differences between the founding promoters and the CEO were out in the open which finally culminated in the resignation of the CEO. In the midst of all these challenges, Infosys also got approval for its Rs.13,000 crore buyback program.

The buyback program becomes all the more relevant at this point of time for two reasons. Retail investors are increasingly asking whether they should opt for the buy-back offer considering the uncertainty surrounding the company at the current juncture. Secondly, the buyback price at the time of announcement itself was at an 18% premium to the market price. With the recent correction post the resignation of Vishal Sikka, this buyback premium has widened to about 30%. Let us understand the logic for the buyback.

The whole idea of buying back shares was triggered when Cognizant decided to return$3.4 billion to its shareholders through a buyback. This decision came in the light of pressure applied by the Elliott Management Group which holds 4% in Cognizant. Subsequently, marquee IT names in India like TCS, Wipro and HCL Tech also announced buybacks. There were two reasons for the buyback. Firstly, when a large company was sitting on piles of cash and had limited opportunities for investment, the logical answer was to reward shareholders either through special dividends or buybacks. Secondly, in the light of the last Union Budget, buyback emerged as a more tax efficient option as dividends above Rs.1 million were liable to pay an additional tax of 10% on these dividends received. This would have been a huge cost on promoters and HNI investors. Hence buyback made more sense.

In the case of Infosys, the company was already sitting on a cash pile of Rs.40,000 crore and the current buyback of Rs.13,000 crore still leaves the company with a huge pile of cash. Also, the Infosys buyback is a lot more complicated. Unlike TCS and Wipro (both of which are substantially owned by promoters), Infosys is a widely held company. It is listed in the US, UK and France apart from India. The revised buyback plan includes a facility for global shareholders holding American Depository Receipts (ADRs) to also tender their shares in the buyback. This was necessitated since more than 54% of Infy shareholding is foreign shareholding.

How do the buyback numbers for Infosys look? 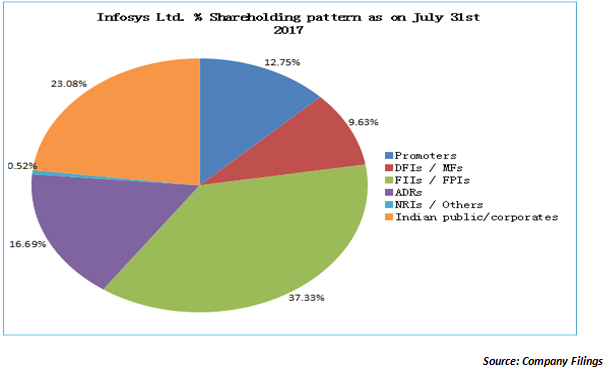 As Infosys has already announced, it will buy back shares of the company at a price of Rs.1150 /- for a total buyback value of Rs.13, 000 crore. As per the regulatory filing made by Infosys, the buyback program will entail buying back 11.3 crore equity shares of Infosys representing 4.92% of the paid-up capital of Infosys. ADRs will have to be first converted into local shares through a special window before they can be tendered for the buyback offer.

What retail investors need to understand about the buyback?

Retail investors need to understand that the figures that we have been talking about of Rs.13,000 represent the overall buyback offer and it includes institutional shareholders too. As per SEBI regulations small investors need to be offered at least 15% of the total buyback size. Small shareholder here refers to the IPO definition of holdings below Rs.2 lakhs. Thus these small shareholders will be entitled to shares to the tune of Rs.1950 crore (15% of Rs.13,000 crore). The entitlement ratio will eventually depend on the price prevailing on the record date of the buyback and that will be taken as the basis for deciding the entitlement ratio. As of now the record date is not announced and that will determine the eventual entitlement ratio for the retail shareholders of Infosys.

Should small investors opt for the buyback?

That is a decision that investors will have to take in consultation with their financial advisors. But here are a few points to consider. Firstly, despite the concerns over growth and the digital shift, Infosys still earns an operating margin of 24%. That is a feat that very few companies have consistently maintained in India. Secondly, it also needs to be remembered that it could be going through 3-4 years of uncertainty as companies like Infosys adjust to the new normal. And the buyback price is close to the peak touched by the stock in the last 5 years. In fact, in the last 5 years, the stock has only briefly for a period of 2-3 months in mid-2016 quoted above this buyback price. Retail investors need to consider the above 2 factors while taking a decision on whether to opt for the buyback or not.