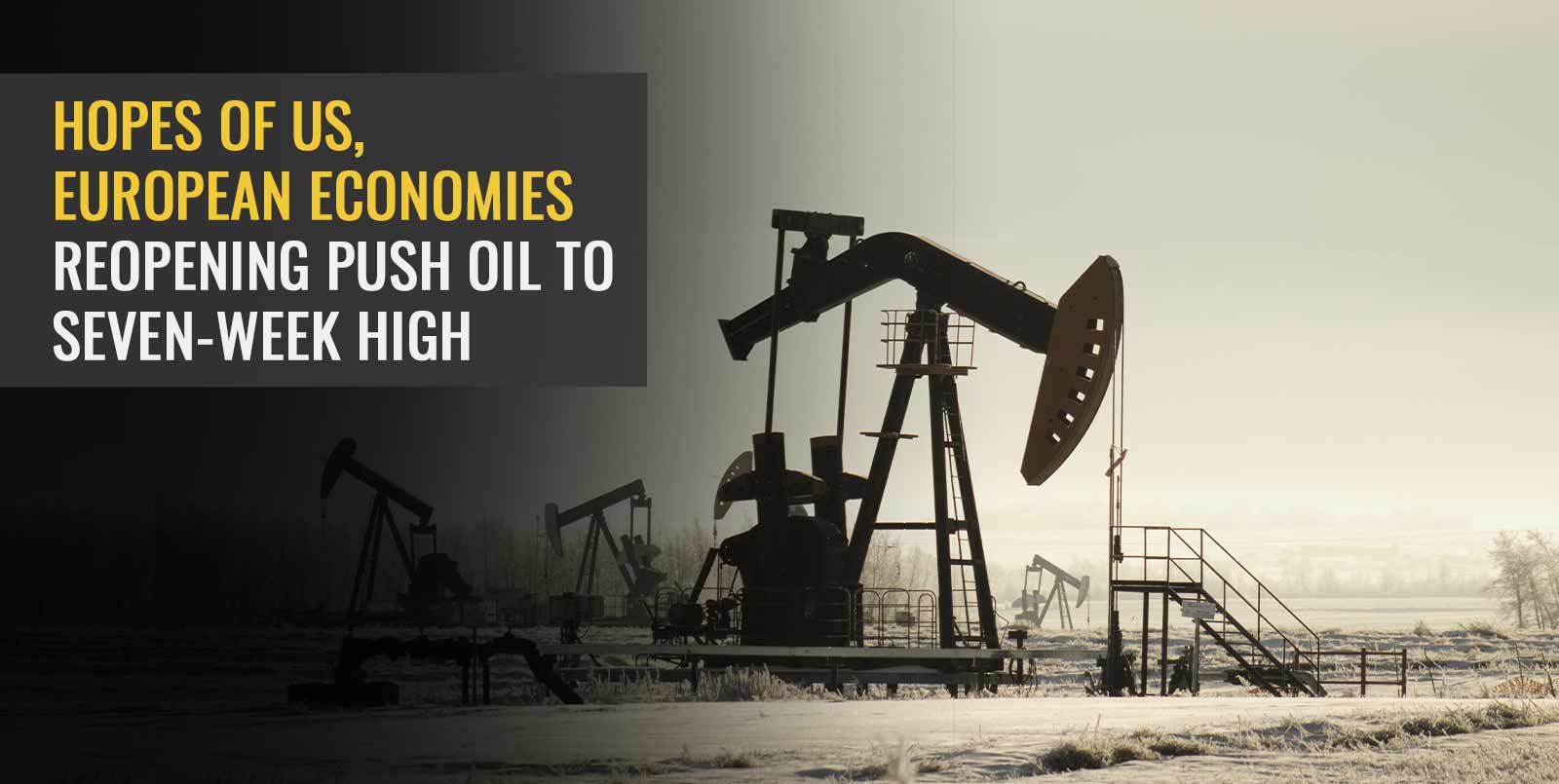 Oil continued to hold gains on Wednesday and seemed to consolidate its seven-week high on hopes that two major markets- the US and Europe will kickstart steady consumption soon. The hope comes on the back of efforts of the two economies to reopen on a larger scale and bolster vaccination efforts.

Steady reopening of major economies on the cards

Official figures released from authorities in the US indicate that approximately 40.6% of the US population or roughly 104.7 million people have been fully vaccinated. Additionally, data released by the US Centre for Disease Control and Prevention also shows that more than 145 million Americans or 56.3% of the total population has received at least one Covid jab.

On Tuesday, US President Joe Biden announced that his administration will push to vaccinate close to 70% of the US population by August 4, America’s Independence Day. Biden is hoping that the success of the initiative will mark a decisive turn in the USA’s fight against Covid or in his words “ a serious step towards a return to normal”

UK Prime Minister Boris Johnson has also promised that the lockdown will be scrapped by June 21. He also extolled his government’s effort at spearheading a vigorous vaccination campaign that till now has given out over 50 million incoulations.

The vaccination drives in the US and UK, as well as Europe, are off-setting concerns that oil consumption would be hurt because of lower demand in Asia, especially India where Covid cases are still relatively high and the second wave seems to be wrecking the economy, and domestic oil demand.

Clear signals emerging from US and Europe

Market experts said that news from Europe signalling the gradual reopening of the economy is an optimistic sign that global demand will continue to rise from hereon further.

What’s more, the rise in crude futures was outpaced by the gains seen in petroleum derivatives, most prominently gasoline. Reportedly, the spread between gasoline and crude futures was at the highest level since April 2020. Traders indicated that this should be seen as a green shoot indicating that consumption of oil in the US could return to the normal, pre-pandemic levels soon.

What lies in store for crude oil

Oil also rose earlier and hit its highest level in a month on Tuesday as supplies from Libya were disrupted, and expectations took root that there will be a drawdown in U.S crude inventories.

On Wednesday, the US West Texas Intermediate (WTI) crude futures rose to $66.17 a barrel, a level that was last seen on March 8. Brent crude futures were trading at $69.37 a barrel after kissing a two-month high of $69.78 a barrel earlier in the session.

Evidently, both the benchmark contracts moved up by 2% ahead of the American Petroleum Institute figures, which showed that crude stocks had a drawdown of 7.7 million barrels in the week ending April 30. Traders will be awaiting data confirmation from the Energy Information Administration to ascertain if such a drawdown has indeed taken place.

The Organisation of Petroleum Exporting Countries (OPEC) maintained its production of crude at a steady level in April, which is to be hiked up this month. In April last year, major oil producers from across the globe settled on a historic deal in which they decided to cut down oil production by almost a tenth to 9.7 million barrels a day. The deal, largely brokered by the US, also helped put an end to the price war between Saudi Arabia and Russia. As Covid hit the global business scenario last year, the global oil benchmark Brent crude briefly fell to an 18-year-low of $20 a barrel in March 2020.

Several experts have suggested that the upward trajectory of Brent crude futures can be foiled by the Covid outbreak in India, which continues to pose the biggest downside risk to oil prices. Experts estimate that gasoline consumption has slumped in India by close to 6% and diesel consumption by 2%. They expected the weakness to continue given that India is still reeling under the second wave.

On Wednesday, India reported 3,780 deaths by Covid in the last 24 hours pushing the total number of deaths so far to 2,26,188. India’s total number of patients infected with Covid scaled up to 2.06 crore cases and the fresh cases for Wednesday clocked in at 3.82 lakhs.