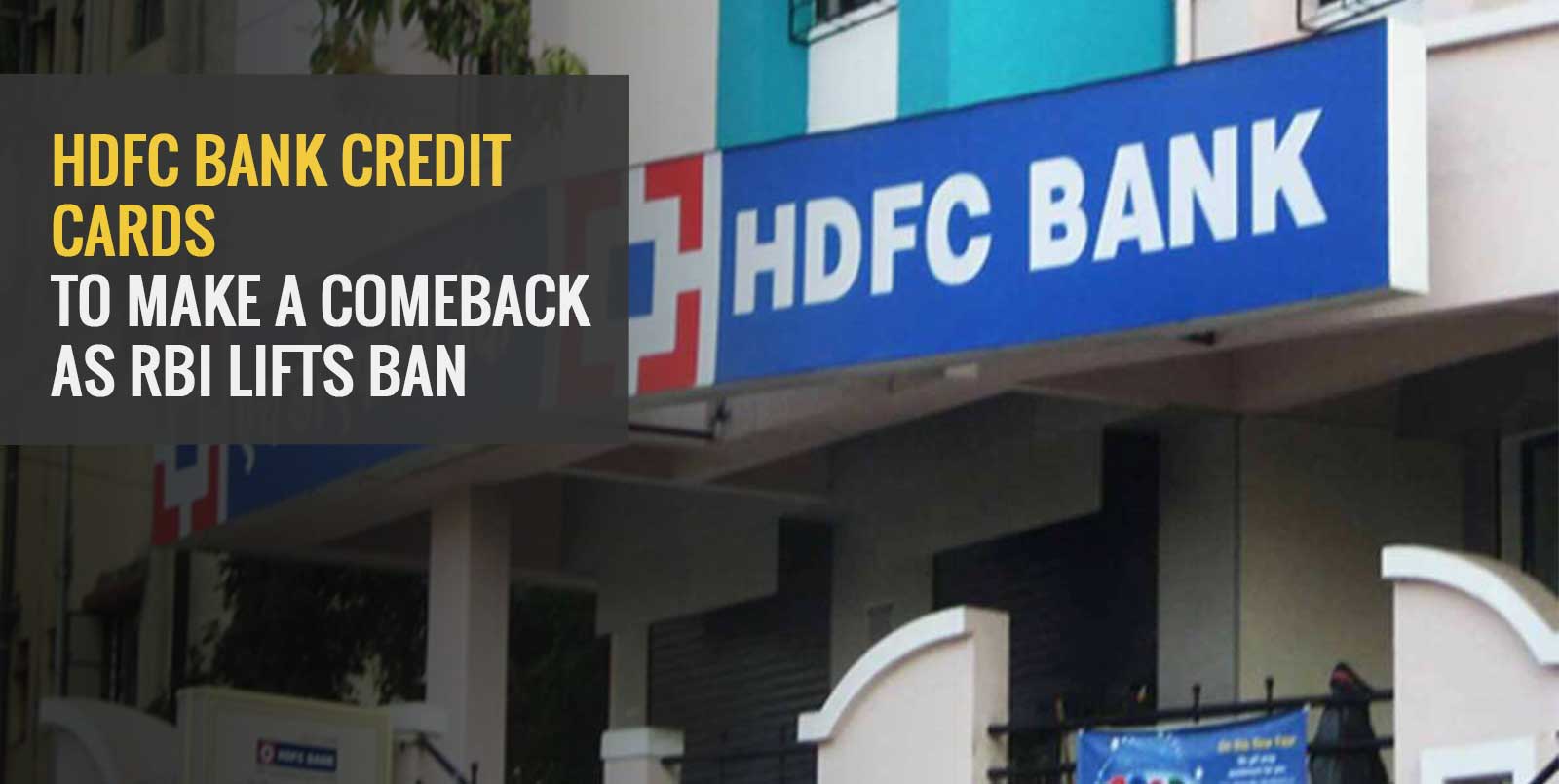 HDFC Bank is back in the business of credit cards as India’s banking regulator RBI lifted an eight-month ban on issuing new cards.

The Reserve Bank of India (RBI) had imposed these restrictions on the bank due to frequent outages and glitches with their internet and mobile banking. This ban hit HDFC hard financially as it contributed to a large part of the bank’s income. As a result, HDFC saw its market base erode by 200 basis points (bps) while its competitors grew their market share.

Following is a more detailed look at the lifting of RBI’s ban and how it may affect HDFC.

Why did RBI Impose a Ban on HDFC Credit Cards?

With digital payments in India scaling an all-time high in 2020, RBI had adopted a strict stance on glitches and outages in online banking services.

HDFC Bank had been having multiple issues with their internet and mobile banking systems over the previous two years. When system-level failures happened in November 2020 due to power failure in the primary data centre, RBI issued an order to HDFC Bank to temporarily stop the following services:

RBI’s order stipulated that the financial institution examine these lapses and fix the accountability of their digital systems. Moreover, RBI made a promise to lift the ban when the lender fully complied with the order.

Financial Loss Due to the Ban

HDFC was the largest credit card issuer in the country, and its total card base dropped from 15.38 million to 14.82 million between December and June 2021. At the same time, as their market share fell by 200 bps, competitors such as SBI, ICICI Bank, and Axis Bank witnessed gains in market shares. However, even with the losses, HDFC remains the largest credit card issuer in India, with 14.8 million cards outstanding at the end of June 2021.

Action Taken by HDFC Bank to Comply with the Order

Following the ban, HDFC apologised to their affected customers and assured them that they would work hard to strengthen their digital capabilities as soon as possible. Then, they submitted plans to the banking regulator detailing short, mid and long term strategies to deal with this problem.

The financial institution made several changes to its technology infrastructure to solve the outage problems. They have made substantial investments in installing better infrastructure, recruiting new talents and acquiring cloud-native stacks.

On 17 July 2021, the bank’s chief executive announced that it had complied with 85% of RBI’s orders.

What does the Lifting of Curbs Mean for HDFC?

The company has set out to recover further with an ambitious plan to double the monthly issuance of credit cards. Their sales team have prepared an aggressive target of issuing 5,00,000 cards every month starting from September of this year.

HDFC Bank intends to make a full comeback to the credit card business with an aggressive plan. Moreover, they expect large profits in the festive season as aggressive stance and discounts drive accelerated growth in card issuance.

As such, many experts are of the opinion that the lifting of bans has come at an opportune moment. However, others remain uncertain about the festival retail boost due to the potential threat of a third wave of the Covid-19 pandemic and a poor consumption sentiment among consumers.

RBI had imposed a ban on HDFC Bank against issuing new credit cards and digital product launches. This was due to instances of outages and glitches in the company’s mobile banking app and internet banking platform.

RBI had imposed curbs on HDFC Bank against issuing credit cards till they fixed all problems with their digital systems. After they completely revamped and strengthened their online infrastructure to handle large volumes, RBI partially lifted its ban.

RBI’s ban on HDFC Bank against launching new digital products is still in effect. This will be completely lifted in around a year as the bank completes its technological transformation.