The IIP number for the month of June 2017 came in sharply lower at -0.1% compared to 1.7% in the previous month of May 2017. A correction in the IIP was expected in the month of June due to the impact of the GST launch, although it was not expected to dip into negative territory. In fact, the real pressure came from the GST launch from July 01st onwards. But why exactly is GST relevant to the IIP number?

There was a lot of uncertainty surround the actual GST rates through the month of June as the GST Council had not finalized rates for quite a few product categories. Additionally, the rates were still in a state of flux and modifications were being made based on feedback received. As a result, the manufacturers of most products did not see any point in going ahead aggressively with production. Instead, most of the companies focused on offloading their inventories to avoid the uncertainties over applicable rates. This focus on offloading inventories rather than building inventories actually resulted in weak Index of Industrial Production (IIP) numbers. 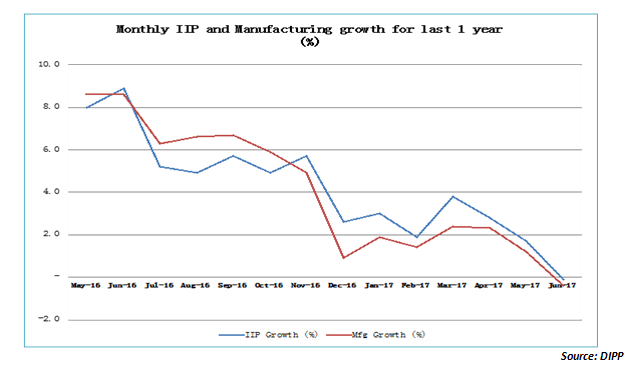 There are structural challenges in Electricity generation…

In fact, both the key components of the IIP viz. manufacturing and electricity faced major challenges. While we shall dwell in detail on the manufacturing segment, sector wise; the real structural challenge appears to be on the electricity front. The growth in electricity production has fallen from 9.1% to just 2.8%. Firstly, there was the court order negating the demand from Tata Power and Adani Power to claim credit for the higher cost of imported Indonesian coal. That has almost made power production unviable at both these plants. Secondly, there has been a recent development at the form of state governments repudiating the power purchase agreements (PPA) that they had signed with the power generating companies. In fact, the states of Uttar Pradesh, Andhra Pradesh and Karnataka have already repudiated their PPAs and have called for signing fresh PPAs. This is not only going to impact the economics of power generation but also likely to create a mountain of potential NPAs for banks who have an exposure of over $20 billion to these power generating companies. The real challenge in case of electricity is that the issue is structural and hence the weakness could last for much longer.

Manufacturing has been really tepid in June 2017…

The shift in the trend is obvious from the fact that 15 out of the 23 industries that are included in the Manufacturing Growth index have shown negative growth trend. Electrical goods were the major negative contributor at -28.2% and this was largely driven by the slowdown in the construction sector in the aftermath of the passage of RERA and a slowdown in new projects. Diesel production also saw a negative growth of -14.8% which indicates a more perceptible shift towards petrol. Cement was another major negative contributor with nearly -14.5% de-growth. Like electrical goods, cement has also seen weak demand due to tepid pick-up in construction activity.

On the positive side, different forms of steel products continue to be positive contributors. For example, HR coils and HR plates saw growth in the range of 10-25%, largely on the back of a policy environment that has favoured domestic manufacturers of steel. Jewellery also grew by 14% on the back of higher festival demand. The only downside to this sharp rise in jewellery demand is that it is pressure on the trade account in the form of higher gold imports. Digestive enzymes and antacids almost doubled over the last year, but this can be attributed more to the inclusion of new enzymes and biotech products in the IIP basket. The underlying trend of the manufacturing sector clearly appears to be on the downside.

Is it just a passing phase or a larger trend?

The big question is whether this dip into negative territory is a trend shift or just a blip. Monthly sales figures coming from FMCG and autos for the month of July indicates that there has been a perceptible reversal to positive in the month of July 2017. That means, once the impact of GST wears away, the IIP should get back into positive territory. What is a matter of concern is the consistent downward trend of the IIP. One only hopes that this trend bottoms out in the post-GST scenario. The data for July and August will be keenly watched.

That brings us to a slightly more complicated question. Will the IIP data impel the RBI to cut rates when it meets next in October? Frankly, that looks quite unlikely. In its August policy the RBI cut repo rates by 25 bps but refused shift its monetary stance from Neutral back to Accommodative. The RBI may not read too much into this fall in IIP as it could have been caused more due to the GST launch. Also, the recent experience has been that rate cuts are not exactly driving up growth. For that we may have to await the next round of IIP announcements!