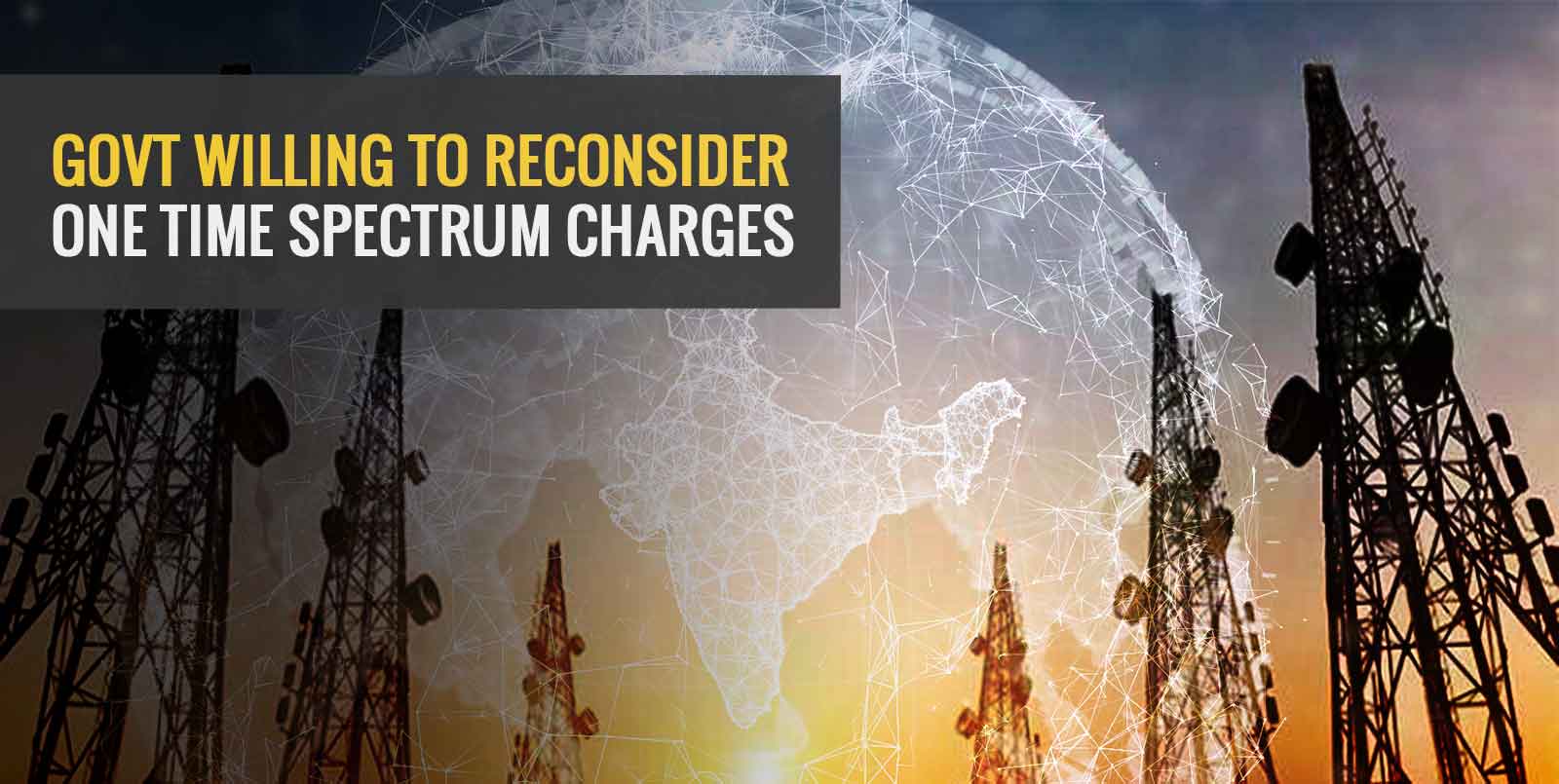 The government has indicated that it may reconsider the case pertaining to the one time spectrum charges (OTSC) of Rs 40,000 crore against telecom operators, as per news reports.

The Department of Telecommunications (DoT) has sought a three-week period to reconsider the decision to penalise telecoms for the delay in the payment of one-time charges for spectrum. The Supreme Court is expected to hear the case on November 17, according to reports.

In an affidavit in the Supreme Court, the government has noted that the steps taken by the Cabinet including the moratorium on the spectrum and adjusted gross revenue charges, were taken to boost competition in the telecom sector and ensure the sustainability of service providers. The decision of reconsidering the government stand on the OTSC was made after taking into account the financial situation and the consequences of the potential outcome of the case, the affidavit reportedly noted.

So, what is the spectrum?

Spectrum pertains to the radio frequencies that signals travel over. Images, voice and data are transmitted via these frequencies. The Department of Telecommunications (DoT) in India conducts spectrum auctions periodically to allocate licenses. There is a specific bandwidth for radio signals, which is essentially the difference between the upper frequencies and the lower ones. Second-generation wireless telephone technology or 2G may need a different bandwidth from 3G, which is the third-generation technology while 4G brought in the mobile broadband era and is faster than 3G. The fifth-generation or 5G, experts note, will be much faster, with higher download speeds and upload capabilities. The 5G technology will be able to support IoT (Internet of Things) devices.

What do one time spectrum charges mean?

One time spectrum charges are fees that operators are required to pay towards radio waves that are beyond the limit that has been prescribed. The charges are levied by DoT when operators hold excess spectrum, ie, more than 4.4 MHz. The decision to charge one time spectrum fees was taken after the issue of 2G licences in 2008. The one time fees were imposed in 2012 for spectrum in excess of 6.2 MHz in one sickle between July 2008 and January 2013. The licences were later cancelled in 2012 by the Supreme Court. The top court had then declared airwaves as “public goods”. The government had reportedly sought to charge one time fees for additional allocation as many operators held more than 4.4 MHz spectrum. However, the operators claimed that they paid spectrum usage charges which were higher for excess spectrum.

The Supreme Court, in November 2020, did not stay the Tribunal order that had turned down the DoT demand for OTSC allotted in excess of 4.4 MHz. Further, in December 2020, the SC imposed the status quo in the OTSC case. The OTSC case has ever since been debated on and off till the latest adjournment to November 17, 2021.

The government has now reportedly shown willingness to reconsider the one time spectrum charges it had earlier sought, as per an affidavit filed in the apex court. The DoT has reportedly taken note of the appeal made by the India Bank Association pertaining to the telecom sector, news reports note.

The government’s willingness to reconsider its decision on OTSC comes on the heel of the series of telecom reforms it announced in its latest Cabinet decision. In mid-September, the Union Cabinet gave the go-ahead for several steps to offer relief to the telecom sector, including the redefining of AGR or adjusted gross revenue. The Cabinet announced several telecom reforms, including a preset calendar for spectrum auctions and a procedure to share or surrender spectrum.

As per the reforms, spectrum auctions will typically be held in the last quarter of each financial year. Also, spectrum tenure would be increased from the current 20 years to 30 years in all future auctions. Spectrum usage charges (SUC), as per the latest reforms, would be computed on the basis of annual compounding of interest instead of the monthly interest compounding, and interest rates would drop, reports add. Also, telcos would be allowed to surrender spectrum after the lock-in term of ten years upon payment of surrender charges. Sharing would be allowed without costs, reports add.

Further, the Cabinet also gave the nod for 100 per cent FDI in telecom via the automatic route. Currently, the foreign direct investment limit for the sector is 49 per cent. Also, importantly, reports note that the government has announced a four year moratorium for charges pertaining to AGR of telecom service providers. The moratorium has also been extended to spectrum dues arising from past auctions.

Adjusted gross revenue or AGR is the licensing and usage charges that telecom operators are required to pay to the DoT. The charges include spectrum usage charges in the range of 3 to 5 per cent and licensing fees of 8 per cent. Till the redefinition of AGR taken up in mid-September 2021, AGR charges meant all revenues earned by a telecom firm, including non-telecom related charges. Now, non-telecom revenues have been excluded from AGR.

The deferment of pending AGR charges would come into effect from October 1, 2021 with interest and penalties that accrue on the deferment. According to ICRA, the rating agency, the AGR dues moratorium would provide a relief of Rs 14,000 crore for the telecom sector, while the moratorium on dues would provide relief to the tune of Rs 32,000 crore.

The previous definition of AGR, which was upheld by the Supreme Court back in 2019, had meant that telecom firms had to pay charges of Rs 1.6 lakh crore. The Supreme Court, in September 2020, had sought telco players to pay up the charges with effect from April 2021. The current redefinition reduces the charges that telcos were liable to pay.

The government has indicated willingness to reconsider its position on the levy of one time spectrum charges to the tune of Rs 40,000 crore on telco operators. The OTSC case has been a long-standing issue between the government and telecom players, and the government had appealed against the telecom tribunal’s ruling in 2019 in the Supreme Court where it disallowed retrospective OTSC. The government’s willingness to reconsider comes on the heel of the Union Cabinet bringing in several reforms in the sector, including a four-year deferment on spectrum usage and AGR charges.

One time spectrum charges are fees that operators are required to pay towards radio waves that are beyond the limit that has been prescribed.

In 2019, the Telecom Disputes Settlement and Appellate Tribunal (TDSAT) ruled that the Department of Telecommunications could charge for spectrum held beyond 6.2 MHz prospectively and not 4.4 MHz. It ruled against retrospective charges.

Earlier adjusted gross revenue meant all revenues earned by a telecom firm, including from non-telecom sources. Now, non-telecom revenues have been excluded from AGR.

The Union Cabinet brought in structural and procedural reforms in the telecom sector on September 15, 2021.

The Union Cabinet announced a moratorium of four years for payment of adjusted gross revenue and spectrum usage dues with effect from October 1, 2021. However, service providers who avail the four-year relief would still need to pay interest.

As part of the telecom reforms, the government gave the go-ahead for 100 per cent foreign direct investment via the automatic route, in place of the earlier limit of 49 per cent.

The fixed calendar announced as part of the telecom reforms notes that spectrum auctions will be held in the last quarter of every financial year.