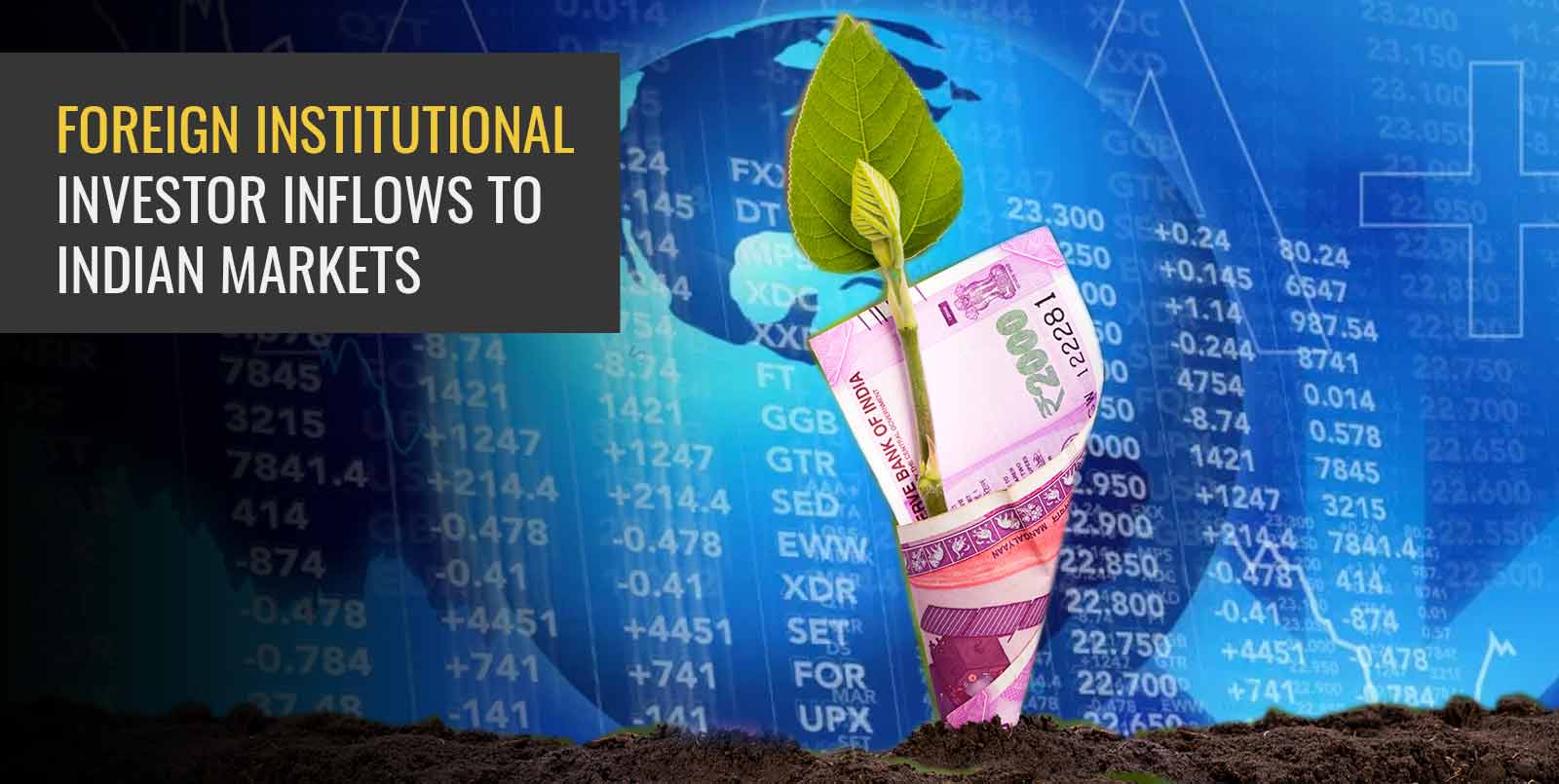 While there are various factors like strong financial performance of India Inc. (Despite Covid-19 challenges), increased retail participation and global investors flocking to Indian markets that guided the indices towards the higher levels. Apart from this the factors like prudent Government policies, fiscal support provided to India Inc. and last but not the least RBI maintaining the liquidity as well as keeping the interest rates lower also played an important role.

While we have discussed various factors that helped the indices move northwards – we believe the institutional investment (domestic as well as foreign) have played a pivotal part in the rally. The following chart clearly suggests how the Foreign Institutional Investors have invested significant amounts in Indian equities.

The above chart categorically shows that the FIIs had sold heavily in the month of March 2020 and this was the time when the indices had made lows. Eventually the inflows increased and so have the indices. The confidence of the FIIs seems to have increased along with every quarterly result of India Inc. Naturally the financial results of India Inc. were ahead of the estimates.

Why FIIs Invest in India?

We have historically seen that FIIs have been the major drivers of the Indian equity markets. The following chart categorically suggests that since the year 1999 there are only a few years when the net inflows of FIIs were negative. If we take a detailed look at the chart, it shows only three times the investment has been negative in 2008, 2011 and 2018. If we take a look at the indices movement during this period, it shows the impact of FII outflow was clearly visible. There were periods when the FII investments were lower as compared to previous year. However it is important to note that the inflows were positive for the majority of the period.

There are reasons why Indian equity markets are recognised on the global maps.

The first and the foremost factor is political stability. Though it may seem a very general factor – it actually plays an important part. It is the political stability of the country that leads to a better growth trajectory. Further unless the Government is not stable the policy making does not get quicker. India has always had a good political stability and hence there are few instances when there are negative flows. That also the year 2008 was a once in a century kind of Global meltdown and 2018 as well the US tapering issues cropped up. Else India has been on the Global investors’ radar.

Second factor is, India has been one of the few global Economies with a larger size showing constant GDP Growth. India either has been the fastest growing or the second fastest growing nation on the GDP growth front. Even in the current pandemic India GDP growth estimates by World Bank for FY22 is 8.30 percent (lowered from 10.10 percent earlier). But again this is next only to China growing at 8.50 percent.

Third factor is the kind of length and breadth Indian equity markets have in terms of sectors and market capitalisation – it is difficult to create another India kind of investment destination. Just to put a few of the parameters, it has the most diversified kind of sectors where investors can park their funds. Be it Financials, Oil & Gas, IT, Telecom, FMCG, Realty, Insurance, Steel, Automobiles and many others. Indian equities have a diversified market as compared to other peers. There are 35 different industry or sector classifications in India. Further, just to put it in perspective, while Brazil and Russia are a commodity play in Case of China, it has been seen how the US has been having a tussle. Further the combination of being a democratic country with the right kind of demography and strong domestic consumption story – makes India a unique market. Further the best of regulators and technological advancement in the Indian equity markets get an accolade on the global front. Further the other smaller countries do not offer a depth as the market capitalisation is very low for any foreign institutional players to make an investment. In simple words it is difficult to create another India kind of investment destination.

All in all, a stable Political scenario, better policy formation, strong growth prospects and having length, breadth and depth in terms of sectors and market cap for global Institutional investors – India is expected to remain a favoured investment destination for global investors.

Which Sector Got Maximum Investment?

While we have already spoken about the macro parameters of how much FII Investment came to India, let’s take a micro perspective as well. We are presenting a chart – that shows where is foreign portfolio investors (FPI) money is invested in India?

The above chart shows as on May 31, 2021 the total FPI asset under custody (AUC) stands at USD 554 billion. Financial Services is the sector where FPI has the highest exposure at 35 percent of total AUC. This includes the Banks and financial services both. We have presented the top ten investment sectors and as mentioned earlier, the highest allocation by FPIs is towards the Financial Services at USD 195.79 billion. This was expected with the technological advancement India is marking in the digital domain of the financial world.

The second on the list is software and services. With the globally recognised players like TCS, Infosys and other leading IT companies, the investment towards the sector is expected to witness further growth. Especially with the digital focus of the Government and telecom Services providing better penetration even in rural India.  Oil & Gas and Automobile are the next two where the AUC as on May 31, 2021 is placed higher.

How has the Last fortnight investment pattern been?

While we have already spoken about the total allocation and standings till date, readers would be more interested in where the current inflows and outflows have been? This would help the investors about where the hot money or we can say smart money is flowing. The following chart shows the exact picture of the fortnightly investment pattern. Again as expected financial services is the one sector that scores high here as well. In the last fortnight it attracted USD 924 million of investment. Though there is a larger difference between the number one and number two – Utilities stand second with an investment of USD 115 million. The next traction is visible in sectors like Automobile, Metals, Consumer Durables and Capital Goods. Hotels, Petrochemicals and Transportations also saw traction. One can find stock from the above sectors to filter the list.

Like the way investment has been made in few sectors a lot of sectors witnessed out flow in the fortnight ending May 31, 2021. The following chart tells a detail story about it.

As the list suggests the outflow has been higher in Case of Telecom services, food & Beverages and also the Software Services. Surprisingly Insurance and realty (expected to be come back sectors) also witnessed marginal out flows.

As we move ahead the Volatility in Indian equities and even the global equity markets may make an impact on the FPI flows to Indian markets. However there are going to be sectors where flows would be stronger. Try to look for such sectors where FPI Investment is moving and it may help you get a winner that manages to outperform even in difficult scenarios.