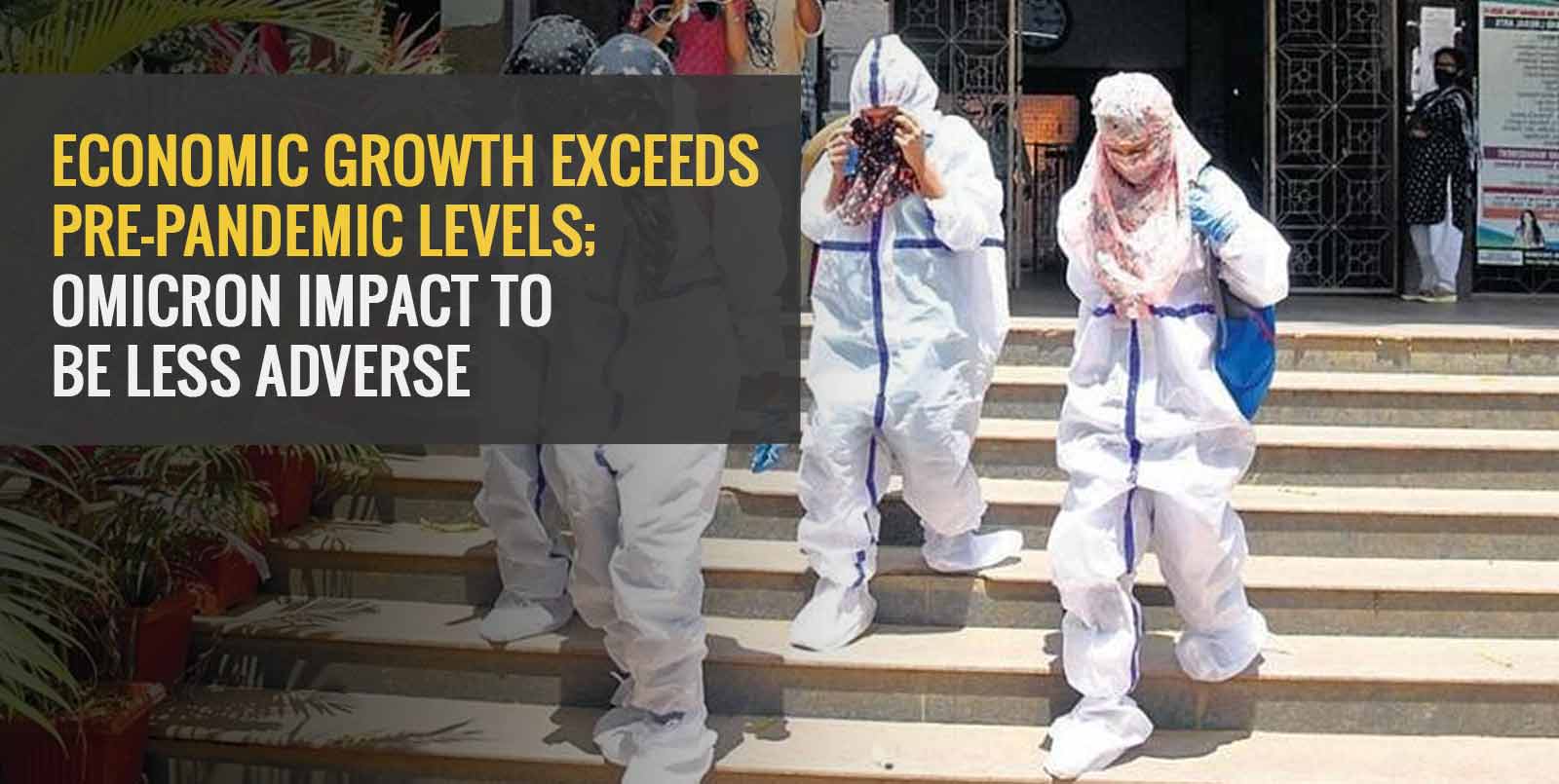 The impact of the new Covid-19 variant, Omicron, may reportedly be not as severe on the country’s economy, according to the latest economic review from the government. The report notes that although it does pose some risk to the current recovery on the global scale, its impact may not be as adverse on India’s economy because of the pace of vaccinations.

India’s GDP growth rate for the second quarter of the current fiscal also grew by 8.4 percent aided by the uptick in vaccination numbers and an increase in services-related activity. It may be recalled that the country’s GDP had seen a shrinkage of 7.4 percent in the same quarter of FY21.

The report for the month of November reimposes confidence that Q3 and Q4 of FY22 will witness a robust economic recovery. Further, it notes that 19 out of the 22 indicators of economic recovery for the months of September, October, and November have crossed the levels shown before the pandemic, ie, the same months of 2019. These indicators are called high-frequency indicators and have been monitored ever since the pandemic started in India.

According to the government’s data, certain indicators such as e-way bills (in terms of volume) and production of coal have seen over 100 percent recovery. The GST collection of Rs 1.31 trillion for November 2021 was the second-highest ever since the tax was introduced over four years back. However, the number of e-way bills for inter-state commerce moderated at 6.12 crore from the October high of 7.35 crore. In the first 12 days of December, the daily e-way bills generation came in at 21.72 lakh, indicating a pick up in demand. The country’s coal production for the month of November was at 67.84 million tonnes as compared to 61.47 million tonnes in the same month during 2019.

Among the other indicators, electricity consumption, sale of fertilizers, and PMI for services have all seen recovery. Construction and manufacturing sectors have also exceeded the pre-pandemic level of growth, according to the report. The PMI for services, although dropped slightly to 58.1 in November, was still the second-highest in a decade. In October, the PMI for services was 58.4, which was the highest over 10.5 years. Meanwhile, the manufacturing PMI went up to 57.6 in November 2021, from 55.9 in the prior month.

The eight core sectors index grew at 7.5 percent for October 2021 over the level shown in the previous year. The core sector growth for October this year was 6.9 percent compared to the pre-covid period of October 2019. The eight core sectors include cement, steel, fertilizers, electricity, crude oil, coal, natural gas, and refinery products. The Index of Industrial Production (IIP) saw a recovery for the month of October 2021. The IIP data refers to an index that indicates the growth of industrial production for a specific period. The sectors include mining, electricity, manufacturing and capital, basic and intermediate goods.

Meanwhile, experts note that the economic growth path in the coming quarters and fiscal will depend on factors such as the degree of severity of the new variant and the RBI’s monetary policy, ie, a likelihood of a marginal hike in interest rates and a graded liquidity withdrawal. The monetary policy committee has maintained its growth expectation of 9.5 percent for the current fiscal, which would mean a 1.6 percent GDP growth rate over FY21, ie, the pre-pandemic year.

The impact of the new variant may be less adverse on the Indian economy, even as the GDP growth rate for Q2 of 8.4 percent and several other economic indicators show a 100 percent recovery over the pre-pandemic levels of FY20.

What is India’s GDP growth rate for Q2 FY22?

What are the PMI readings for services and manufacturing for November 2021?

What is the Index of Industrial Production or IIP data?

The Index of Industrial Production or IIP data refers to a measure that tracks manufacturing or industrial production growth across several sectors for a specific period, typically a month.