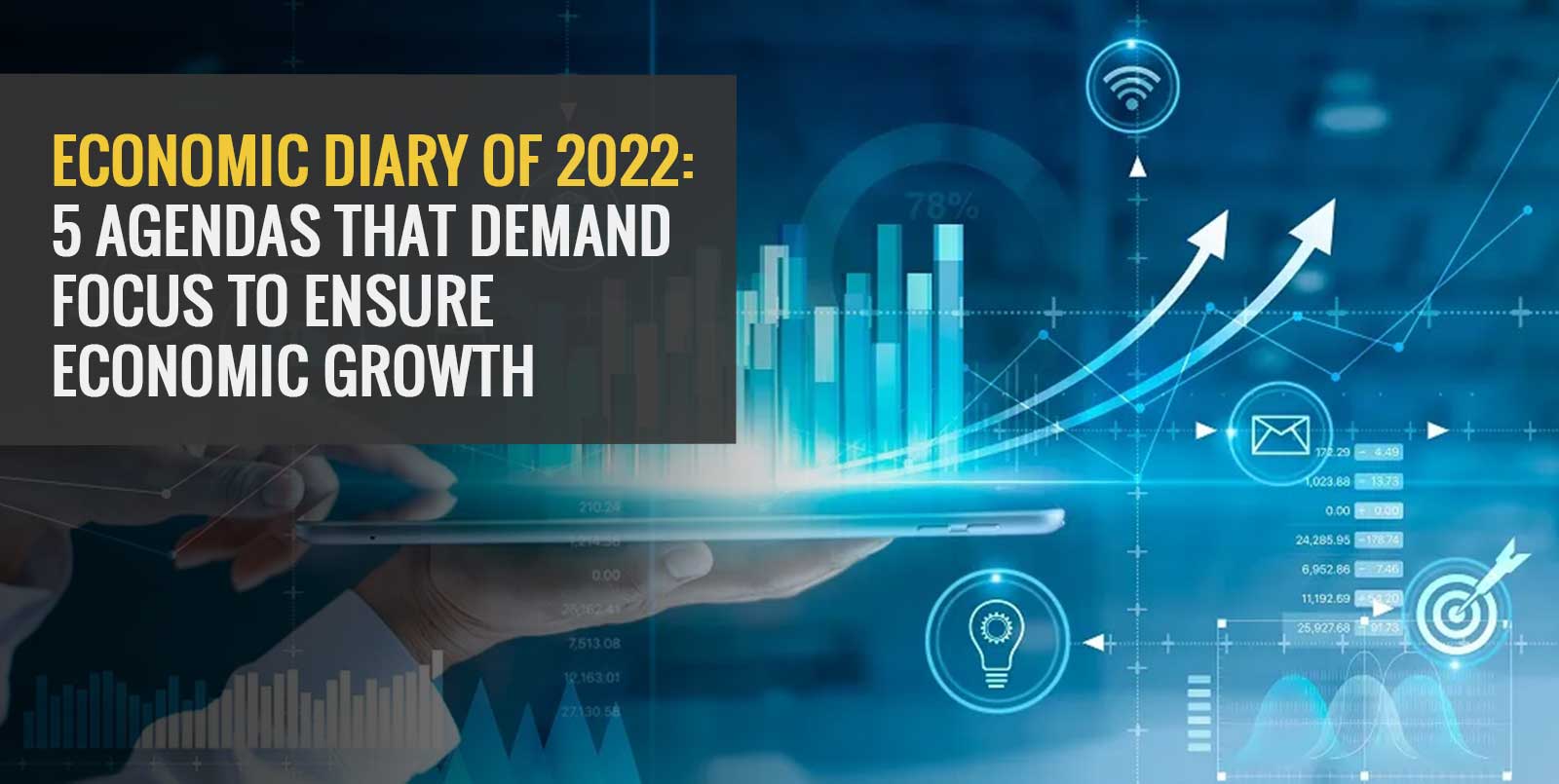 According to the NSO’s first advance estimates, India’s real gross domestic product (GDP) growth is estimated at 9.2% in 2021-22, which is lower than the 9.5% projection of the Reserve Bank of India and the International Monetary Fund. India’s economic growth may slow down to 9% in the current fiscal year due to the impact of the third wave of COVID.

The estimated size of India’s economy in real terms is about Rs 147.5 lakh crore in 2021-22, which is marginally higher than the previous year’s figure. Due to the impact of the third wave of COVID, India’s real GDP has been wiped out for the entire year. Since the effects of COVID may continue for a long time, it is not prudent to expect a robust real growth rate of around 7%.

However, these areas need to remain under the radar as India plans the economic agendas for the Fiscal Year 2022-23.

The upcoming budget should assist growth by beginning back consumption demand. While inflation is largely external, the government must focus on addressing the supply side bottlenecks through infrastructure projects.

As China’s manufacturing base is set to decline, India should be placed as the supply hub. The National Infrastructure Pipeline would help boost India’s infrastructure development. It is time for the NIP to reorient its strategy and timeline to address the various shortcomings in its implementation.

It is also important that the targets for the infrastructure investment are realistic and the shortfalls are identified. This will help accelerate the country’s infrastructure development and achieve its potential growth rate of 7%.

The proposed fiscal consolidation path was also missed due to the onset of COVID. As a result, the general government’s debt-GDP ratio has increased to almost 88.0% by March 2022. The Fifteenth Finance Commission has proposed the formation of a High-powered inter-ministerial group to re-examine the fiscal and debt sustainability of the country’s central and state governments.

The proposed reduction in the fiscal deficit to 6.8% of the gross domestic product in 2021-22 may be considered. A medium-term stepwise reduction in the deficit would be welcomed by markets and the government.

Non-tax receipts are not covered by the National Monetization Pipeline for land assets owned by the government. These assets can be monetized through various means, such as leasing them at commercial rates.

The revival of the economy in 2022-23 will depend on the extent to which COVID’s third and subsequent waves have adverse effects. Despite its effects, COVID is expected to remain with us for the long term. A comprehensive strategy should be implemented to minimize its negative impact.

A comprehensive strategy should also be developed to address the country’s health infrastructure gaps. The combined health expenditures of the central and state governments have remained below the global norm for several decades. India’s per-capita bed availability is only 18.3%, which is significantly less than the global average. Similarly, India’s per-capita availability of nurses and physicians is 38% and 50%, respectively, of the global average.

R&D expenditures in the public and private sectors should be increased to counter COVID. India should also become a leading producer of vaccines. In the future, India should also focus on manufacturing goods and services globally. This will help develop healthcare facilities in underprivileged countries. As part of its strategy to take advantage of the demographic dividend, India should also expand its services exports.

Next Phase of GST

The next phase of the Goods and Services Tax reforms can now be initiated. However, the ability to generate revenue has not been sufficient to make the indirect taxes revenue neutral. In June 2022, the compensation arrangement for states will end. This will result in a revenue shock for many states, and the system will have to be reimplemented.

Some arrangements may be made to mitigate the revenue shock caused by the end of the compensation arrangement in 2022 This may involve keeping the existing system while implementing a new base number and a more realistic growth rate for calculating compensation. Eventually, the comprehensive strategy for assessing and avoiding rate increases should be evolved.

What is a National Infrastructure Pipeline?

The National Infrastructure Pipeline, which is also referred to as NIP, is a set of projects in India that have been approved for a period of five years. An amount of Rs. 102 Lakh Cr is approved for this project.

What is a National Monetization Pipeline?

National Monetization Pipeline (NMP) is a project of four years involving Rs. 6 Lakh Cr. It aims to unlock the value of brownfield projects by transferring them to the private sector.

What is the State Compensation Agreement under GST?

With the implementation of GST by replacing the old indirect tax structure, there was some loss to the State Governments. To compensate for that, the Central Government agreed that any shortfall in the indirect tax revenue to any state will be given back from the pool of funds called GST Compensation Fund for a period of 5 years. This will end in June 2022.