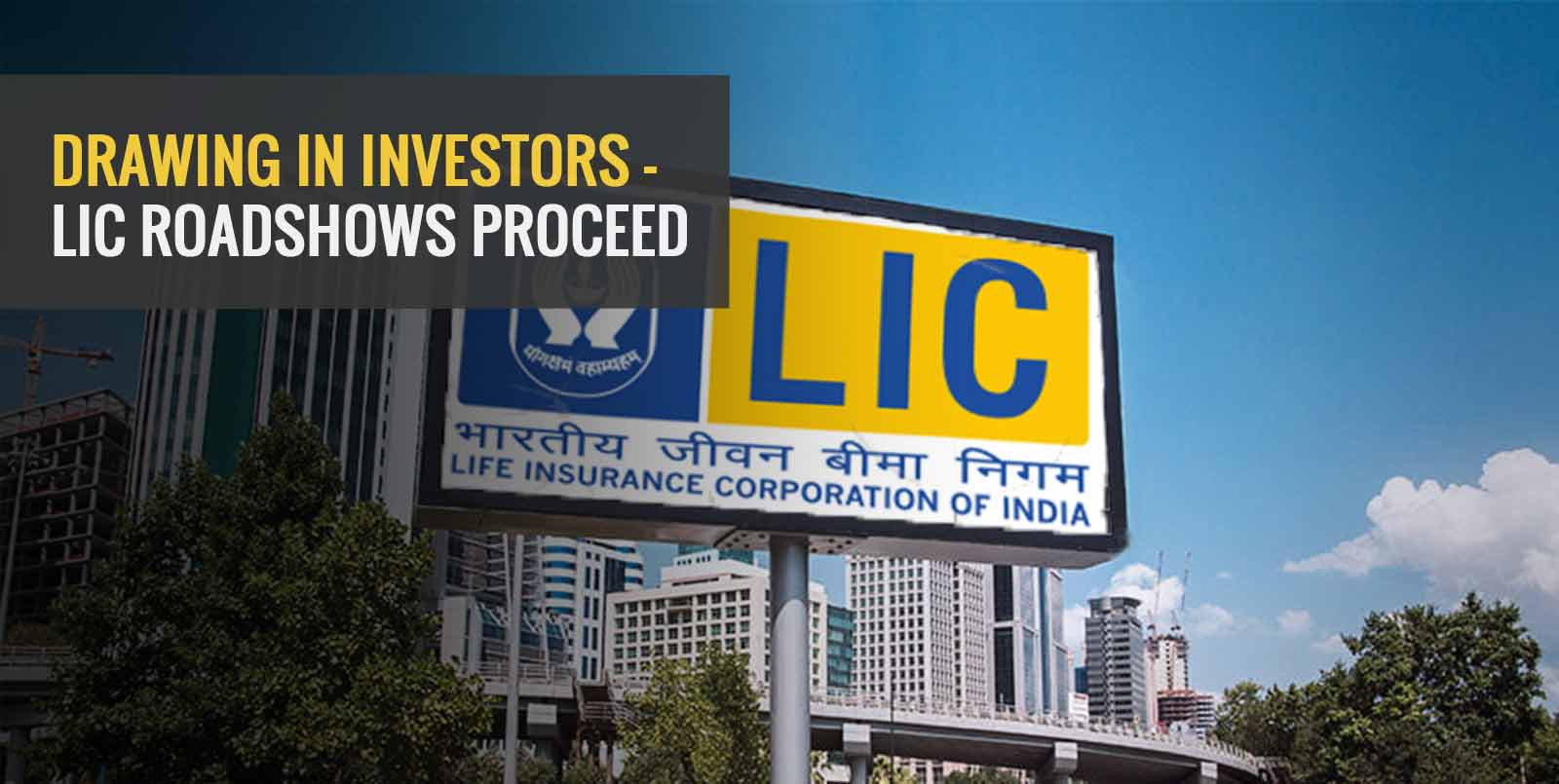 The Union Budget announcement for 2022-2023 made clear the government’s desire to follow through with its insurance behemoth, Life Insurance Corporation of India’s (or LIC), public issuance of stock in the form of an initial public offering (or IPO). Anticipated to be the country’s largest ever IPO, LIC has begun its campaigning endeavours to draw in potential investors. Continue reading to understand more about its roadshows.

The roadshows organized by the insurance giant have continued and amount to close to seven or eight each day. Each of these roadshows serve as a cog in the wheel of the broader scheduled presentations that have been designed to appeal to the sentiments of potential investors. The fact that these roadshows have begun occurring – and the pace at which they have been carried out – is telling as it indicates the Corporation’s IPO plans remain active.

Thus far, the general sentiment towards the LIC IPO was based on the understanding that the government planned to bring close to 180 institutional investors into the IPO helm owing to the size of the Life Insurance Corporation’s issue. Owing to this very fact, investment bankers working on behalf of the Corporation had created a number of presentations that were up and running towards the latter half of February. As per speculations surrounding the IPO go, it is believed that it will commence in the second week of March and will see itself listed prior to March coming to a close.

Creating a Stir in the Market

As per a statement made by M R Kumar who serves as the life insurance giant’s chairman earlier this week, an ample amount of interest had been garnered towards the Corporation’s upcoming IPO. It comes as no surprise therefore that LIC is now broadening the scope of its potential retail market. Their method for going about the same involves policyholders being asked to link their permanent account number (or PAN) as well as ensuring that they each have a functional and valid depository or Demat account.

Understanding the Relevance of the LIC IPO

With a policyholder base amounting to 29 crores, despite the volatility within the market and the fact that foreign portfolio investors appear to be withdrawing from Indian stocks, the LIC IPO is expected to run smoothly.

The proceeds from this IPO will come into the hands of the government who is entitled to use them as per their discretion once the offer expenses have been deducted and the relevant taxes have been applied on the same. LIC on the other hand will not be the recipient of any of the proceeds made via their IPO. A whopping INR 50,000 crores to INR 1 lakh crores are anticipated to come into the government’s control. This range and final amount depends entirely upon the offer price. The government’s coffers are expected to benefit tremendously from the same as their revenue will rise and these funds are expected to bring down the deficit.

As far as the Life Insurance Corporation is concerned, the sale of their shares will allow for greater visibility and will result in investors being able to actively trades its shares on the relevant exchanges. Furthermore, a greater amount of transparency will exist and mean that the Corporation will be required to shed light on information pertaining to price sensitive factors to its investors.

Wrapping Up – Potential Roadblocks to Consider

One of the major hurdles that the LIC IPO poses is the fact that the government is dependent on it in order to fulfil its revised disinvestment target which amounts to INR 78,000 crore for the financial year 20201-2022. In the event that this IPO isn’t as well received as is anticipated and hoped for, the government will not be able to fulfil this revised target.

With inflation becoming a growing concern and the desire of central banks located across the world to raise interest rates, equity markets are expected to continue to be bowed down by pressurised conditions in the near future. Should interest rates continue to rise in the developed world, it could mean that foreign portfolio investors would extract their money from emerging markets – in particular equity markets – and instead, direct them towards US treasury bonds. The secondary market would consequently be put under pressure and the liquidity available in the primary market issuances would dry up. Since the issue size of the LIC IPO could very well amount to over INR 50,000 crores, the value of liquidity cannot be sufficiently stressed.

Uncertainty regarding global politics today and its impact on the markets is also an additional factor to consider.