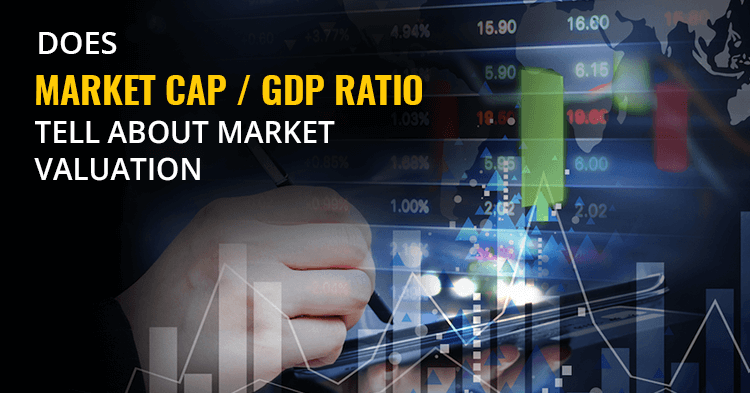 If you were to read analyst reports on market valuations, the most common measure is market P/E. Undervaluation and overvaluation does work quite well at a market level. For example, if you have bought into the markets in 2003 or in 2009 when the P/E ratio was closer to 12, you would have surely made a lot of money. Similarly, if you had sold out at P/E ratios of above 25 in 2007 and 2010, you would have managed to buy back into the market at lower levels. But there is a problem with this measure. It only considers the total earnings of listed companies in the market. What about many large companies and businesses that are either government owned or are not listed? That is where the Market Cap to GDP ratio comes in handy.

How much does this work out to? India’s current market cap of all listed stocks is around $2.3 trillion while the real GDP is $2.6 trillion. Remember, India has already emerged as the 6th largest economy in the world beating France in the last 1 month. The ratio will look be as under in the Indian context…

Why you need to be wary of this measure (Market Cap / GDP ratio)?

There are 3 things you need to be wary of before using this measure. Firstly, market cap is a stock while GDP is a flow. Essentially this becomes ratio of a stock to a flow, almost like the Price to Sales ratio. One can argue that these are not strictly comparable. Secondly, stock market only covers the value of all the listed companies in the country but the GDP is the value of all incomes which includes unlisted private companies, small businesses, MSMEs, proprietorships, partnerships, government companies, government departments etc. Hence, the numerator and the denominator may not be strictly comparable. Thirdly, a lower Market Cap / GDP ratio is not always a sign of undervaluation. It also depends on how much is the stock market penetration of your economic activity. That is why the Market Cap / GDP ratio is much above 100 in advanced countries like the US, UK and Singapore where more of business comes under the formal sector. So 88% cannot be assumed to be a sign of undervaluation in the Indian context.

How the Market Cap / GDP ratio has moved in India over the years?

Since the beginning of 2018, the ratio has come down from above 100% to 88%. That is because, the index has been static but it is also because there is been a huge wealth destruction in mid caps and small caps. Actually, in year 2017 the market cap / GDP ratio of India crossed the 100% mark after a gap of almost 10 years. One can straight away interpret this as a sign of overvaluation. This is also happening because the government is bringing more and more sectors into the capital market ambit. Imagine the impact when defence also comes under the ambit of capital markets in a big way.

The Market Cap to GDP ratio is nowhere close to what it was in 2007, at the peak of market valuations. Remember, you also need to adjust to the fact that the coverage of the market has expanded substantially. That may not make the current market/GDP ratio fully comparable with the past data.

How to interpret the Market Cap / GDP ratio for India currently?

With the market cap / GDP ratio coming down to 88 in July 2018 there may not too much of a worry for the markets. In fact, there are 4 reasons why this ratio could actually be indicative of a market that is still reasonably valued…