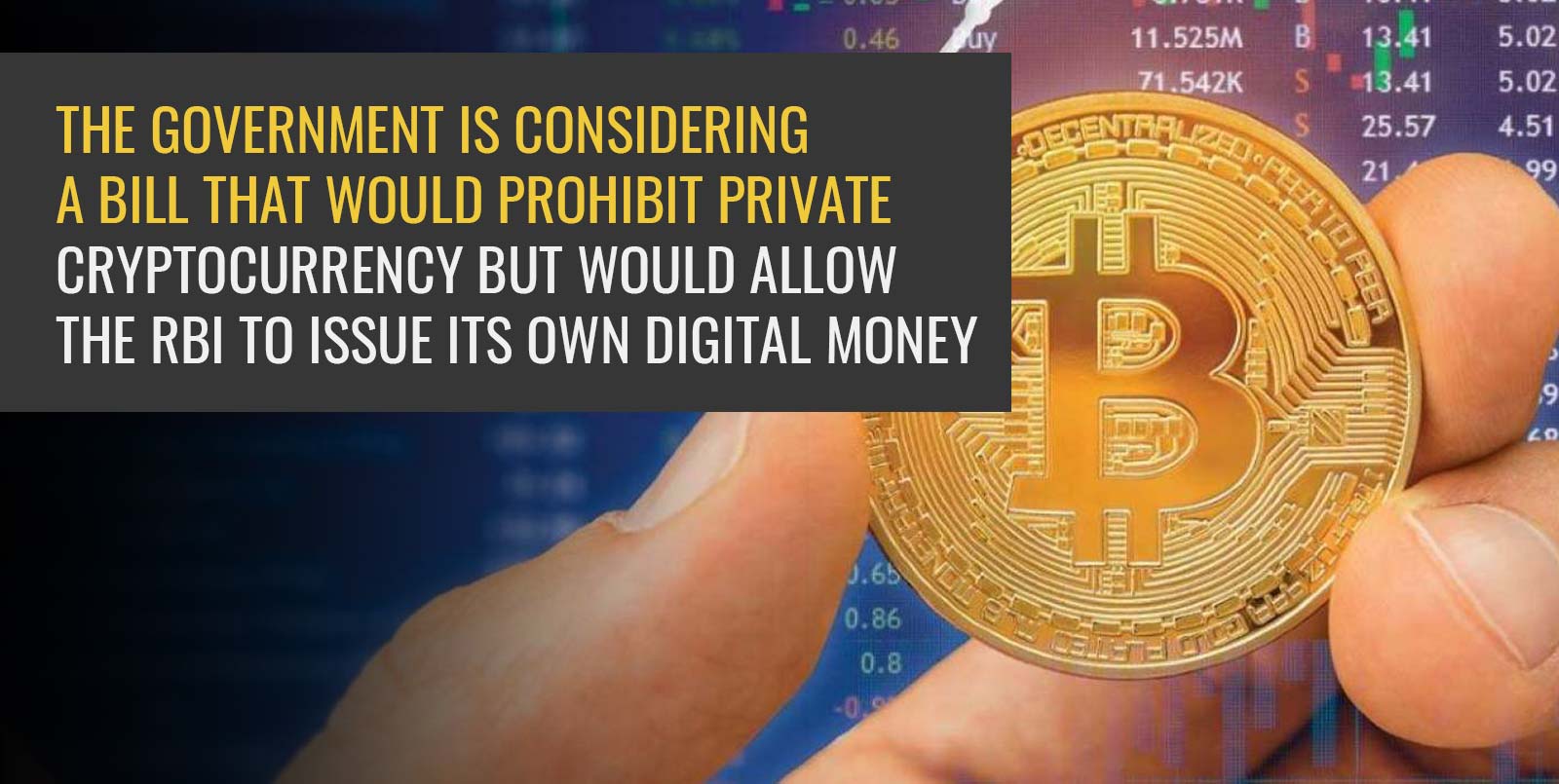 During the Winter Session, which begins on November 29, 2021, a Bill to terminate all private cryptocurrencies in India with limited restrictions is scheduled to be taken up for final review and passage. From a maximum of twenty-nine, the Cryptocurrency & Regulation of Official Digital Currency Bill, 2021 is one of twenty-six new legislation on the government’s legislative agenda. “To build a conducive framework for the creation of the official digital currency to be issued by the Reserve Bank of India,” the government said.

The Bill also aims to terminate every private cryptocurrency in India, with some exceptions to promote cryptocurrency’s underlying technology and applications. This follows the very first Parliamentary committee deliberation on cryptocurrency’s critical consequences, throughout which it was acknowledged that, while virtual currencies cannot be stopped, they must be monitored.

On November 16, a session of the standing committee on finance, which comprised representatives from cryptocurrency trading, the Blockchain and Crypto Assets Council, industry associations, and other participants, was chaired over by the BJP’s senior member.

Financial protection for investors and misleading media advertisements regarding investment opportunities and perils have long been a topic of worry. To study digital currency legislation, the government has scheduled a series of meetings with all parties. On the subject, the Prime Minister convened a high-level conference with officials from various ministries and the Reserve Bank of India.

Concerns have been expressed by the RBI and the SEBI regarding the non-monitored spread of cryptocurrencies in India, with vulnerable ordinary investors in mind.

“In terms of crypto, we have severe worries about macroeconomic and financial stability. How the situation should be handled – we have made thorough recommendations to the government; as far as I am aware, the topic is being actively considered by the government, and the government will make a decision,” at a press conference, RBI Governor Shaktikanta Das stated.

Difference Between ‘Public’ and ‘Private’ Cryptocurrency

Although the central government has yet to define what exactly constitutes a ‘private’ cryptocurrency, it is likely that Bitcoin, Ethereum, and other crypto tokens of the type will not be banned because they are based on public blockchain networks, which means that transactions made using these networks are traceable while still providing some anonymity to users.

Monero, Dash, and other private cryptocurrencies, on the other hand, are built on public blockchains but mask transaction details to provide users with privacy. Unlike Bitcoin, which provides anonymity, Monero provides privacy and is hence a private token.

What is the best way to store crypto?

Consider the rupee as an example of a national currency. It can be placed in your name at a bank or stuffed into a mattress at home where it will be hidden from prying eyes. Similarly, a corporation can hold your bitcoin on your behalf, usually in your wallet at an online crypto exchange. You could also keep it in a private bitcoin wallet without being linked to anyone.

What is cryptocurrency’s purpose?

They were designed to be used in the same manner that rupees and dollars are, as a mode of payment between people for things and services purchased, as indicated by the word ‘currency.’ Consider store reward cards, which are a physical payment option denominated in local money rather than the national currency. Similarly, cryptocurrency, which has its own units, was created to facilitate online digital transactions at a lesser cost than traditional banks.

In the bitcoin market, how do supply and demand work?

Some cryptocurrencies, such as Bitcoin and Ether, are created with a finite supply in mind. Real-world currencies, such as the US Dollar, do not have a rigid supply limit. The value of a supply-limited item is predicted to rise as demand rises. This disparity in supply, combined with high demand for crypto and innovative ways to profit from increasing crypto, has resulted in a self-sustaining loop that has pushed the exchange value of major cryptocurrencies higher.