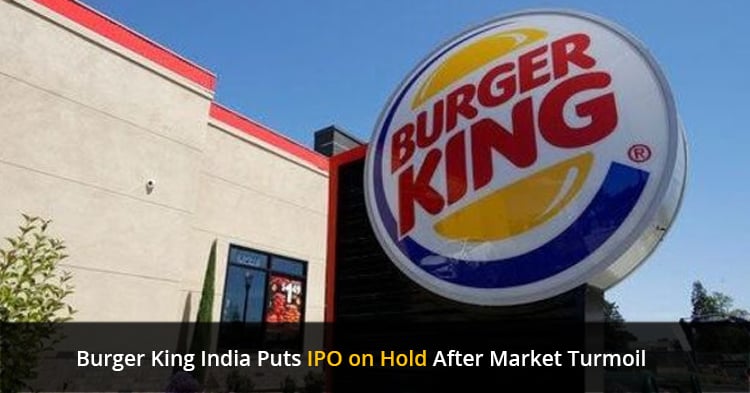 As of March 16th, Burger King India decided to delay its Initial Public Offering as the Indian equity market appears to be in the throes of widespread panic regarding COVID-19. Later in March of 2020, the company was set to launch an initial public offering of ₹10 billion ($134.61 million)m according to Reuters. However, seeing the stock performance on Sensex and Nifty tumble from the novel coronavirus pandemic, this IPO has been put on hold by the company.

In 2013, Everstone acquired the sole rights to build and operate all Burger King restaurants in India. One year after this, Everston opened the very first Burger King outlet in India. By June 30th of the same year, there were 202 Burger King restaurants spread across the country. Burger King’s move to hold its IPO has been the result of factors like seeing market turmoil causing major stocks to plunge. In the current rout, Nifty and Sensex have lost around one-fourth of their current valuations from the highs of January.

Burger King India has decided to postpone launching the sale of its shares after agreements with advisers. No definitive decisions have been taken regarding the sale of shares. Burger King now plans to proceed with it once the market conditions improve from its current state. Global benchmarks, as well as Indian stocks, have plunged as investors remain frightened by the prospect of a recession. The overwhelming sentiment at the moment is that monetary packages and emergency fiscal will not sustain investors through a global recession, and stock market crashes are occurring as a result.

The most crucial factor weighing in on Burger King’s decision is that India might see a nationwide surge in coronavirus cases in upcoming weeks. Currently, India has 510 positive cases with a death toll of 10. Positive cases have been reported in multiple parts of the country. The Prime minister calling for large-scale lockdowns through a nationwide curfew, travel bans, and social distancing is causing businesses to atrophy, and further weakening the Indian economy.

In response, the stock market is in a state of turmoil, with March 20th now being heralded as ‘Black Friday’ for India’s stock market. On 20th March, trading had to be stopped on BSE and NSE due to India’s benchmarks reaching critical levels. Burger King India’s decision has likely been the result of seeing other companies having to withdraw their IPO due to undersubscribed issues. On Monday, March 16th, Antony Waste Handling Cell (AWHC) became 2020’s first mainboard IPO to go unsubscribed in India. The IPO’s period was from March 4th to March 6th.

However, due to behemoth SBI Cards starting its IPO around the same time and drawing in most investors, AWHC decided to extend its IPO for ten more days. On the last day, AWHC had to withdraw its share sale as the issue failed to receive the necessary amount of subscriptions even after an extension of the initial IPO period. By the end of Monday, AWHC’s issue drew bids for around 24,08,200 shares. This number is only about half its total issue size of 48,24,544 shares. As a result of this outcome, market researchers are saying that even if quality names put out their primary offering into the current market, it won’t be easy for them to amass investor approval.

Last week, Rossi Biotech also canceled its Indian IPO briefing citing the reason behind this decision as “unfavorable market conditions.” On Monday, the 16th, India’s first pure-play credit card issuer — SBI Cards Payment Services — also dipped in its stock market debut due to the shadow cast by investor uncertainty regarding the coronavirus pandemic. Earlier in March, SBI Cards had garnered overwhelming support in its IPO. By March 16th, however, even this company witnessed a dull listing at a 13% discount, with the issue price dropping to ₹755. Their share price closed at ₹678 for the day.

Considering that long-term investments are performing in the red, investors are unlikely to put their money into primary bids for upcoming IPOs. Most market experts are even recommending that companies should refrain from starting any primary offers right now, while market volatility is at an all-time high. It’s preferable to wait for stability in the market instead of going in and performing at a loss. With the current market situation, more companies are expected to delay their IPOs, with Burger King India being among the first of the lot.