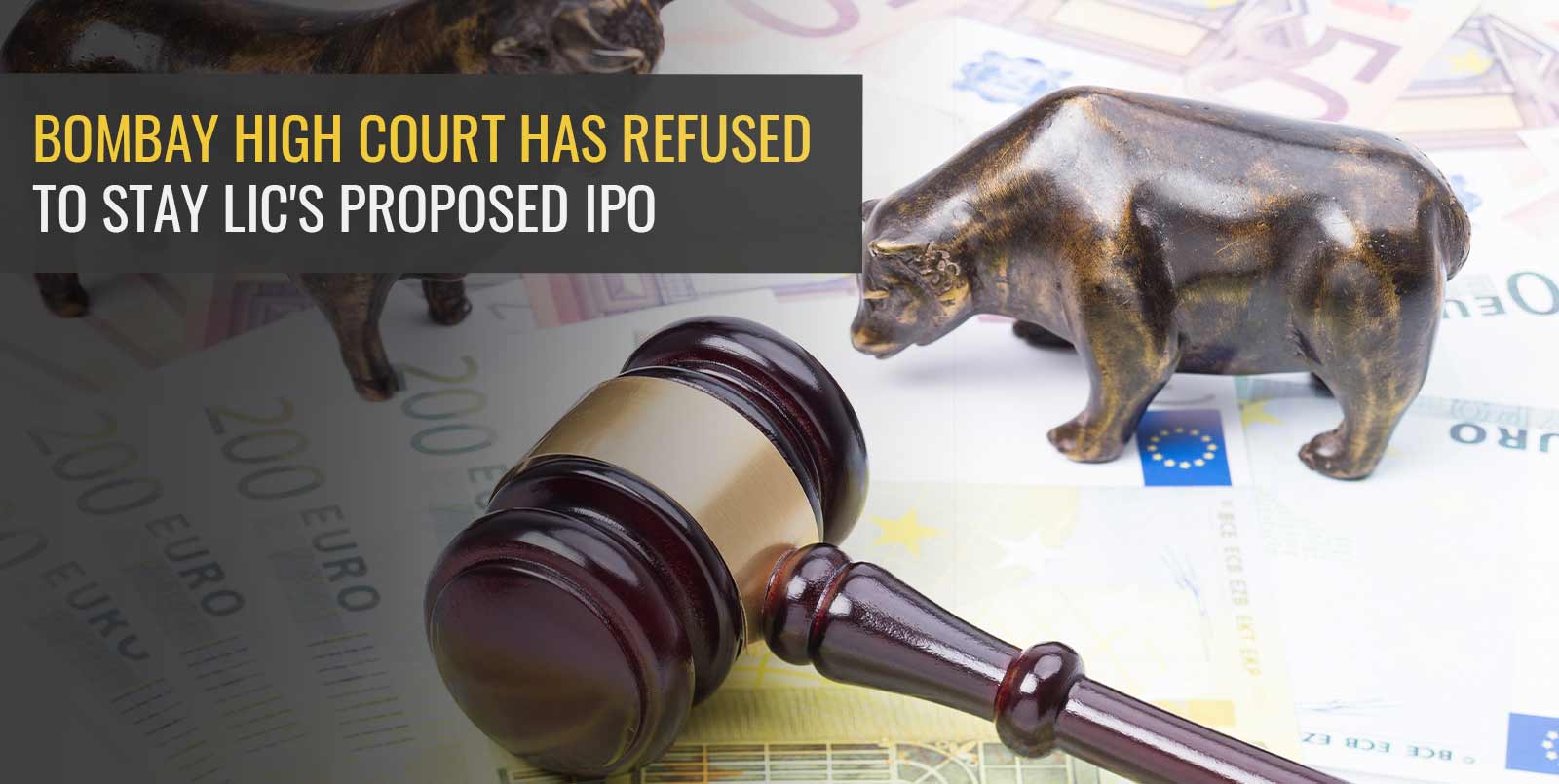 A few policyholders from Nashik seeking a stay on the anticipated LIC IPO were denied ad-interim relief by the Bombay High Court. The High Court heard a petition to overturn revisions to the Life Insurance Corporation Act of 1956 enacted by the Finance Act of 2021. The petitioners also requested an ad-interim suspension of the LIC’s DRHP for the issuing of shares in a public offering to investors.

Despite the fact that the court did not find reasonably robust proof for ad-interim relief at this time, the court said that this is not a final ruling on any of the issues that will be determined in June of this year. It also urged the respondents to submit an affidavit in response to the plea by June 9 if they wanted to, and the petitioners to file a rejoinder by June 16 if they wanted to.

Last month, SEBI authorized the LIC IPO, allowing the government to proceed with the deal, which is expected to generate approximately Rs 60,000 crore. On a petition filed by three LIC policyholders from Nashik, Manohar Sonawane, Charudatt Pawar, and Prakash Desale, a division bench of Justice Madhav J Jamdar and Justice Gautam S Patel issued a decision.

“We are not totally convinced that people such as the petitioners may be deemed to have an enforceable estate in the excess of the LIC fund,” the court stated. “This is a subject that will demand a lot of thought. To put it another way, we don’t see how these groups of people can claim that the excess or any portion of the LIC fund is their property under Article 300 A of the Indian Constitution.”

“It’s one thing to suggest that a person is entitled to a dividend, a bonus, or some other type of remuneration,” it said. “That may be conceptually distinct from stating that the individual has a special stake in the fund. It’s feasible to make the parallel that when a person is issued a check or a negotiable instrument, he has the right to collect the monies as the holder, but he cannot be considered to own the bank account on which the cheque is written.”

Despite concerns about imminent interest rate hikes, soaring inflation and uncertainty surrounding the Russian invasion of Ukraine, which has rattled markets around the world, sources say the government plans to cut the LIC IPO valuation by 30% to make the issue more appealing.

According to reports, the government is now considering a value of roughly Rs 11 lakh crore from the IPO, down from Rs 16 lakh crore previously projected. The government is attempting to maintain a balance for investors once the shares begin trading and to ensure that first-time investors are not disappointed.

Officials from the Ministry of Finance, DIPAM and the LIC are expected to respond. Another insider said that the LIC IPO, which is likely to take place in late April or early May, would now be worth Rs 37,500 crore.

Revisions to the IPO documents

The LIC board will meet this weekend to “finalize its FY22 findings and then publish a revised public offer document by the middle of next week.” The listing “would be finished by May 12,” according to a government source.

After the board approves the findings, the business will submit the updated documentation with the IRDAI. After the road shows are over, there’s a chance the issue may be released by the end of April. According to reports, the government may also submit an amended DRHP for the IPO with the market regulator SEBI. According to the current DRHP, the government would sell 31.6 lakh shares in the insurance colossus to raise Rs 63,000 crore.

Listing rules established by the SEBI

The government has until May 12 to launch the LIC IPO without having to submit new documents with the markets regulator; if it misses the deadline, LIC will have to file new papers with the markets regulator, detailing the December quarter’s performance as well as updating the embedded value. Although the market value of LIC is not disclosed in the DRHP, it is estimated to be three times the embedded value by industry norms.

Visit the Angel One website to learn more about the forthcoming LIC IPO. You may also establish a free Demat account to begin your trading and investing experience!