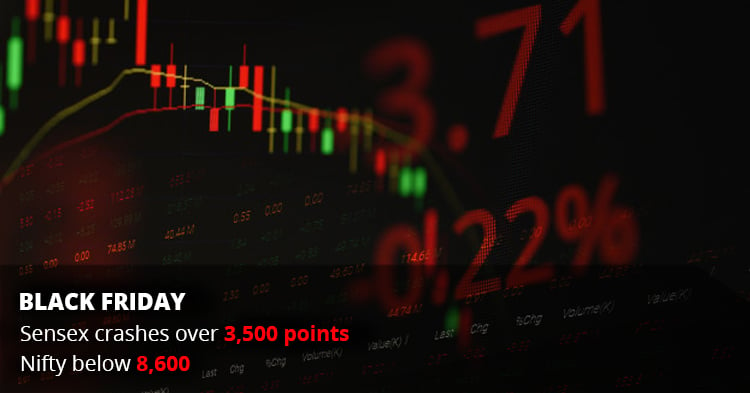 The stock market crash of 2020 is officially here. On 20th March, as soon as trading began at around 9:30 am on Dalal Street, it had to be halted for around forty-five minutes. Both Nifty and Sensex crashed. Sensex fell to 20,687.52 by 3,090 points. Nifty fell below 10% to under 8,700 points. Once trading resumed around 10:10 am, there were slight improvements in market performance, but no full-fledged recoveries. These developments are driven by the coronavirus pandemic which has kept investors all over the world on edge.

Indian domestic share markets have had some of the worst weeks in history. On 20th March which has now been labeled ‘Black Friday,’ Sensex and Nifty were able to stage somewhat of a recovery. After the 45 minute halt, the BSE Sensex crash started to reverse and the index was up by 4% or 1.325 points, reaching 34,103 by closing time. Nifty also reclaimed its 10,000 level by rising by 4.52% or 433 points once the closing bell struck. State Bank of India was the biggest gainer on Sensex as it was up by 13.87% while the top loser on Sensex was Nestle which was down by 4.12%.

State Bank of India was the top performer on Black Friday because of its crucial announcement one day prior. On Thursday, State Bank of India publicly announced that it would be investing ₹7,250 crores in Yes Bank now that it has a 49% stake in the company. To invest this amount, State Bank of India is set to buy 725 crore shares from Yes Bank at ₹10 per share. There is also more hope that Yes Bank will rope in some foreign investors for additional capital infusion.

As of now, Kotak Mahindra Bank, ICICI Bank, and HDFC Bank are expected to pick up the remaining stake in it. The net capital all investors other than State Bank of India will pool in together is expected to be around ₹5000 crores. Since Yes Bank has been bankrupt, account holders are not able to withdraw more than ₹50,000 per account. Hence, the infusion of capital is positive news for Yes Bank’s customers, employees, and investors, who have been at a loss since Yes Bank has halted its services post-bankruptcy.

Analysts claim that, while uncertainty regarding the economic impact of COVID-19 floods international and domestic markets, this volatility is likely to continue. This is evidenced by the fact that stock market crashes are being registered globally, with Dow Jones halting on 11th March. On Friday, in line with India’s domestic markets, global markets also registered massive falls across consecutive trading sessions due to the coronavirus pandemic. A year-long bull run ended for global markets as panic regarding the coronavirus hit almost every asset class, leaving investors no wriggle room.

Even though half a trillion dollars in liquidly has been promised by the US Federal Reserve, investor sentiment did not budge and around 14 trillion was wiped from the global stock market in a matter of weeks. Markets from Jakarta to Seoul fell below their down-limits on Friday as stocks were in freefall. Japan’s Nikkei .N225 followed the NSE and dropped as low as 10 %, a record low for it since the 2008 financial crisis. Not a single stock on Nikkei was in positive territory. Losses outside Japan have been equally staggering.

MSCI’s broad Asia-Pacific index has been brought back to its dire condition from 2017. Australia’s benchmark index also fell by a record low of 8% and has registered its worst-performing week. The Hang Seng index from Hong Kong fell by 5%. The Shanghai composite index from China also dropped by 3%. Commodity prices for oil and gold have predictably fallen and the sovereign-bonds that were supposed to be more durable have followed suit. Investors appear to be liquidating everything possible to cover their losses. Dow Futures YMc1 and well as S&P Futures ESc1 are down by 3% in Asia.

Analysts expect that as long as panic overrides the collective sentiment of investors, these numbers will keep falling or remain in the lower echelons. On the currency front, the dollar won out over most other currencies while Asian currencies suffered under the weight of the growing pandemic. South Korea’s won and the Thai Baht dropped by 1%. Major currencies stabilized after the dollar was furious. Euro EUR found its footing at around $1.1200 while the Australian AUD recovered to $0.6300.