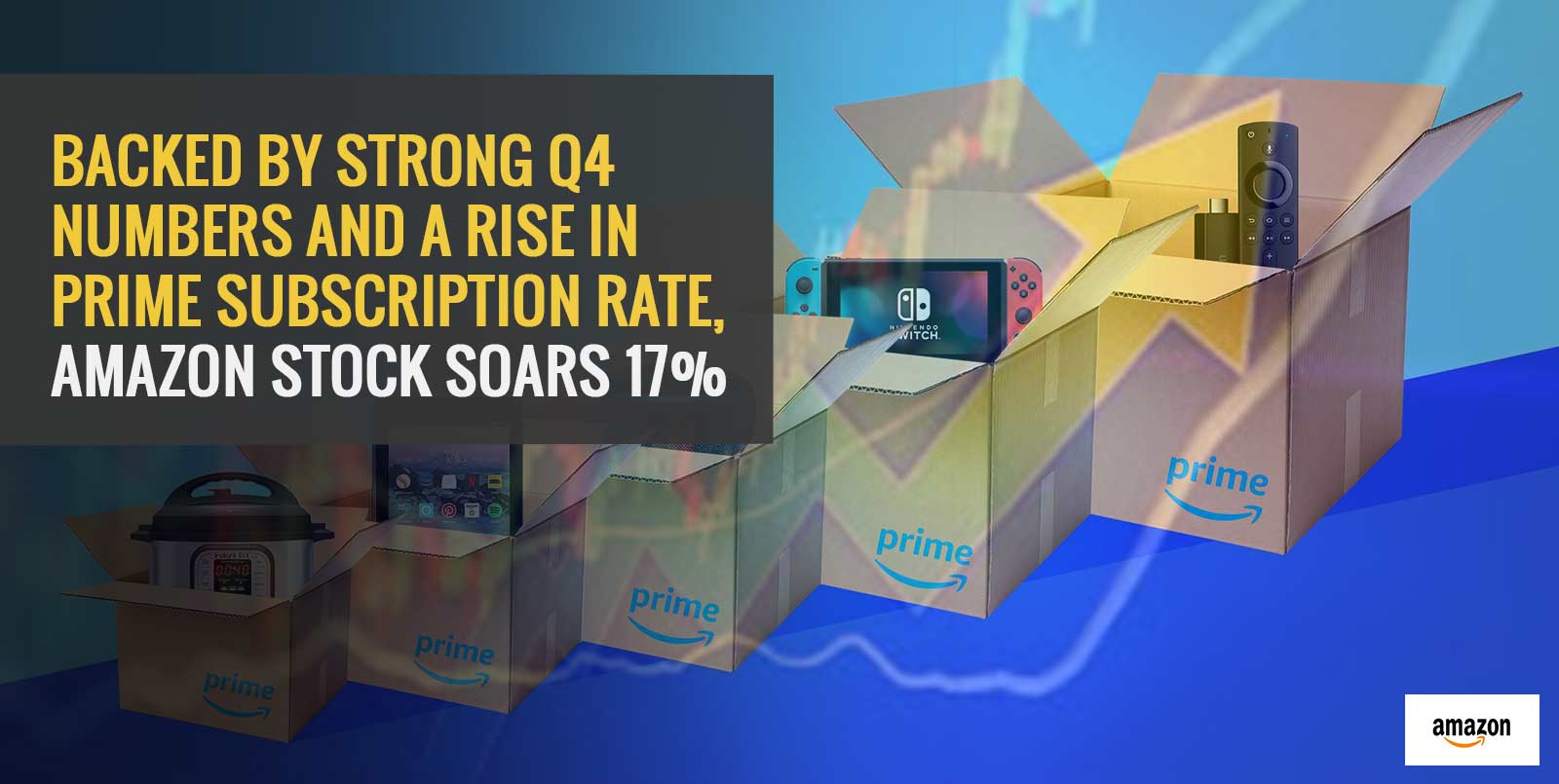 Recently, Amazon came out with quarterly results and the promising number pushed its shares price higher by a whopping 17%. This soared the founder Jeff Bezos’ wealth. If the stock price rises by the same percentage again, it would be its biggest percentage gain since 2009 and give Jeff Bezos’ wealth a boost of $20 billion.

Amazon’s fourth-quarter profit more than doubled to $14.3 billion, helped by a massive gain from its stake in Rivian Automotive. However, to cover higher costs, Amazon shared its plan to raise the price of its annual US Prime membership by 17%.

Following the rise of online sales due to the pandemic, Amazon has invested heavily in its operations to manage the inevitable disruptions. To attract the right people, Amazon has been offering signing bonuses. It has also promoted signing bonuses to attract workers in a tight labour market.

Amazon has raised the price of its Prime membership by $10 to $79, which is the equivalent of around $200 for a year of membership. The U.S. monthly fees for its fast-shipping service are increasing to $14.99, and the annual membership fee is going up to $139. The fee hike is effective February 18 for new Prime members.

Brian Olsavsky, Amazon’s chief financial officer, expected some members to leave, but the retention rate hasn’t been that large in the past.

Prime is an incentive for consumers to shop at Amazon. With more than 200 million members, it’s the largest membership program in the world. They charge retailers for the fees they get from their membership programs. For the fourth quarter, that revenue rose 15%. No changes were made to the membership requirements outside of the US.

Revenue from Cloud Business and Advertisement

The cost of the holidays due to various factors, including operational disruptions and lost productivity, amounted to over $4 billion. The company’s capital expenditures for the next five years would go up significantly, primarily due to the increasing number of employees.

Amazon Web Services, which provides cloud computing services, performed better than expected in Q4 2021. The company’s core business remained strong despite the headwinds, as evidenced by the continued acceleration of its AWS division.

During the pandemic, demand for remote work and gaming increased, which led to a 40% boost in revenue to $17.8 billion. Amazon Web Services (AWS) cloud unit secured a major customer as it continues to compete with other firms such as Netflix.

Google and Microsoft issued positive guidance for their cloud businesses. Canalys, however, pointed out that Amazon Web Services remained the leader. In Q4 2021, Amazon Web Services gained 33% of the global cloud infrastructure spend, compared to 2% for Microsoft and 9% for Google. Amazon’s ad revenue grew 32% in the fourth quarter of 2021. An Amazon official said that the company’s ability to reach consumers across its various ad properties was unchanged after Apple’s privacy tweaks.

The changes, which took effect in late 2016, made it harder for advertisers to target and measure their ads on Facebook and Instagram, causing Meta Platforms to warn that it would take a $10 billion hit this year. Amazon’s first-quarter sales were expected to come in below Wall Street’s estimates, though the company still managed to beat expectations. For the current quarter, analysts were expecting Amazon to generate sales of around $120 billion.

Will there be any change in Amazon Prime subscription price in India?

Amazon has shared no such plan to hike the Prime subscription prices in India. The company has planned to increase the prices in the US since the cost of human resources and low productivity during the holiday season was high.

What was Amazon’s gain from its stake in Rivian Automotive?

Amazon has made a gain of $11.8 billion from its stake in Rivian Automotive. Rivian is an electric car manufacturing company. The gain reported is before tax.

How many subscribers of Amazon Prime are present globally?

The global count of Amazon Prime subscribers, as reported by the company, is 200 million. Subscribers make the most out of this subscription by availing discounts whereas Amazon earned revenue by way of collecting fees.