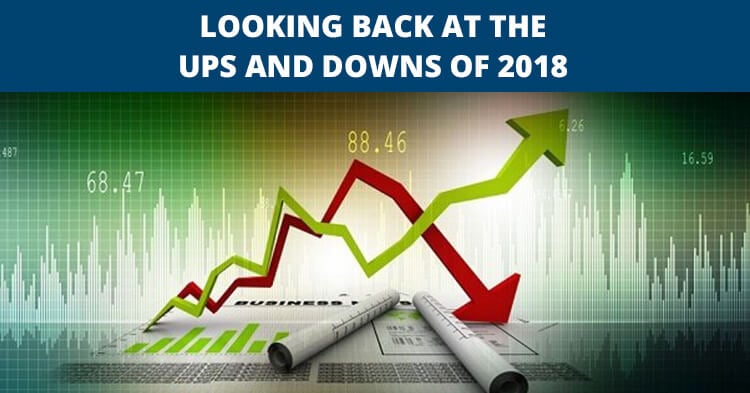 Year 2018 has been a tumultuous and action-packed year for the financial markets. Most of the key markets like the equity markets, bond markets and the forex markets saw extreme bouts of volatility during the year. The reasons were not far to seek. Through the year, there were a series of momentous events and announcements which left a deep impact on the markets. One of the indicators of this high level of uncertainty was that the Foreign Portfolio Investors pulled out more than Rs.90,000 crore during the year from equity and debt. Here are some of the key events that shaped Calendar year 2018 and how they are likely to have a bearing on 2019.

1. Budget was the highlight of the first quarter

The first quarter began with the explosive revelations of how a high profile globetrotting jeweller by the name of Nirav Modi had duped PNB to the tune of $2 billion using fake Letters of Comfort (LOC). While the perpetrators managed to abscond, the Indian banking system was left with the burden, which only added to its mountain of NPAs. But the bigger setback to the markets came in the Union Budget announced in February, which reintroduced tax on long term capital gains (LTCG) on equities and equity mutual funds. More than the tax announcement, it was the finer details that actually hit the markets and resulted in negative FPI flows. The LTCG will now be imposed over and above the STT, which was introduced as a substitute for LTCG in 2004. Secondly, the tax would be a flat tax on the total profits above Rs.1 lakh and there would be no benefit of indexation available to the investors. In addition, dividends paid by equity funds were free of DDT till now, were also taxed at 10%. Overall, the budget had quite a few negative shocks for the capital markets and that set the tone for the year.

The trade war between the US and China officially began with the US imposing stiff tariffs to the tune of 15-25% on most products imported into the US. The obvious target was China, which accounted for 80% of the trade deficit of $620 billion that the US was running. It was hardly surprising that China retaliated with counter tariffs, but with the US running a huge trade deficit with China, it was the US that had a bigger advantage in any tariff war. The other global event that dominated the second quarter was the continued shadow of BREXIT on the European economies. The pound showed signs of weakening after the EU Withdrawal Bill received Royal Assent. The bigger worry was the chaos it would trigger off across the European region as the UK officially walked out of the EU. This was in addition to the economic slowdown fears triggered by the trade war.

The third quarter was dominated by the accentuation of the trade war and a worsening of the BREXIT climate. One of the big emerging markets to plunge into a crisis during this period was Turkey which saw its currency crashing after the US threatened sanctions on Turkey. Meanwhile, it also became evident that Iranian oil supply would be cut off from the global oil market due to US sanctions and that would create a huge supply shortfall. The third quarter laid the foundation of a huge rally in Brent Crude prices. But the biggest event was the IL&FS default which triggered a mini crisis in the Indian financial market. As IL&FS gradually imploded, it became clear that the infrastructure financer would default on most of its $12 billion worth of outstanding loans. This triggered a sell-off in most of the NBFCs and banks that had an exposure to IL&FS. This period was also marked by the sharp rise in bond yields and a fall in the INR. After a long gap, the RBI also raised rates in two tranches by 25 basis points each in June and August.

4. Fourth quarter was all about macros and corporate governance

The last quarter has been an action packed quarter. Brent Crude peaked at $86/bbl and 10-year bond yields surged to 8.3% even as the INR weakened beyond the 75/$ mark. Interestingly, all the 3 macros had substantially improved to pre-crisis levels by December leaving the economy in a much better shape. The US sanctions on Iran were substantially diluted due to global pressures and that led to Brent Crude prices plummeting by nearly 35% from peak levels in a span of less than 2 months. The big shift came on the corporate governance front. The CEOs of Yes Bank, ICICI Bank and Axis Bank were denied an extension even as Kotak Bank continues its fight to let the promoters retain their stake. This is likely to be the one big space to watch out for in 2019.

Undoubtedly, the year 2019 will be dominated by the general elections mood, especially after the big perception shift post the 3 assembly losses. That is likely to drive sentiments in the market in 2019!