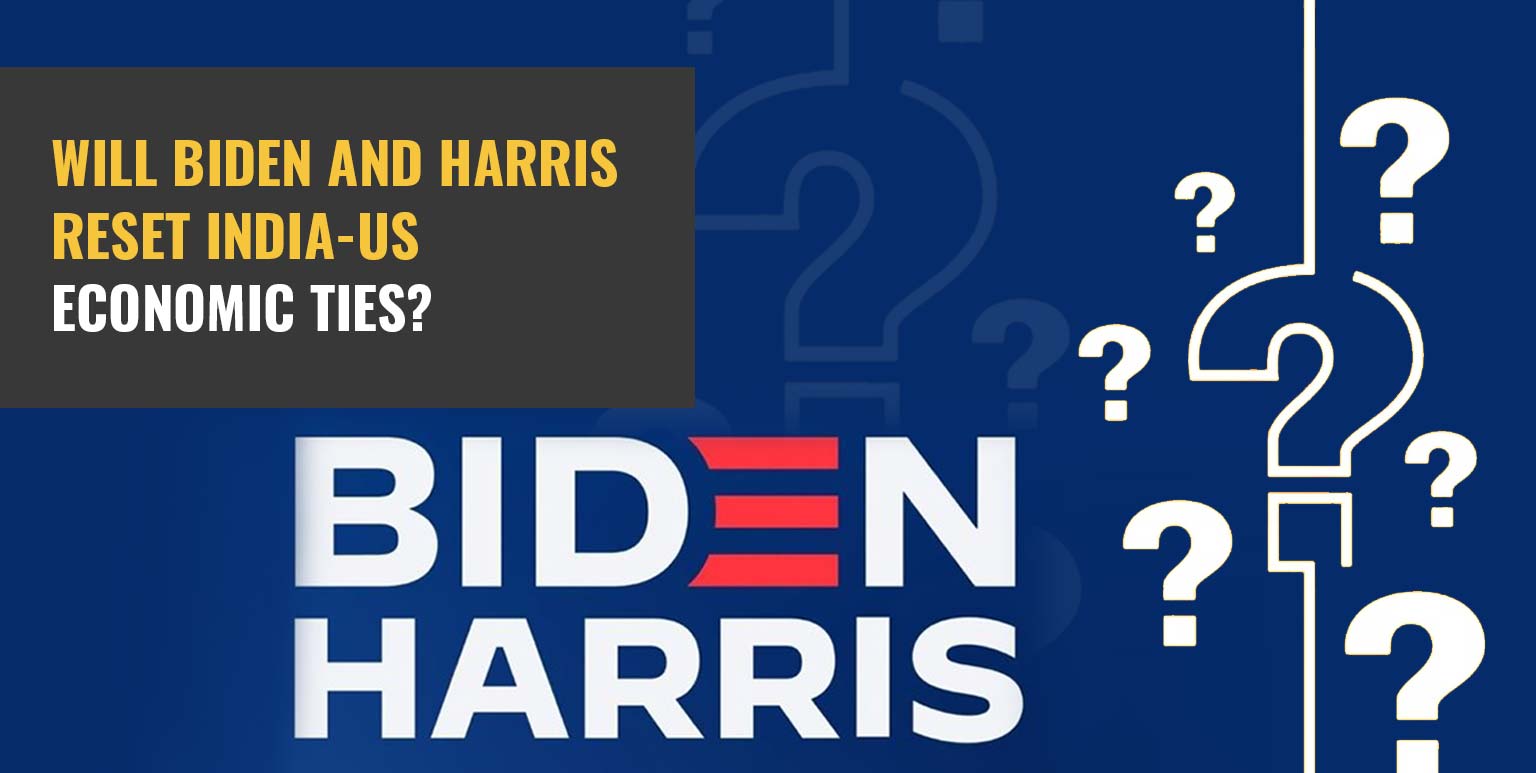 As Joe Biden and Kamala Harris get set to take over as the President and Vice-President of the United States, what does this new administration mean for India, especially on the economic front?

Economic ties are expected to be smooth and the US approach towards India is poised to be favourable. Biden has been known to favour India during his vice-presidency in the Obama regime when he worked on the US Senate approval for Indo-US Civil Nuclear Pact in 2008. The presence of Kamala Harris as Vice President is a further endorsement of the new administration’s belief in multiculturalism and multilateralism. This is likely to come as a boost for Indo-US ties as well. The inclusion of 20 Indian Americans in key roles in the Biden administration will also be a fillip for ties between the two countries.

India stands 9th among the US’s trade partners (in goods) for 2019, while the US overtook China as India’s leading partner in trade for 2018-19 and that continued for 2019-20. It is only in H1 2020-21 that the US has been pushed to second position as India’s trade partner at over $33 billion with Indo-China trade registering $38 billion. This can, however, be put down to an unusual pandemic year, and the faster opening of China’s economy when compared to other countries during the pandemic.

Largely, India has enjoyed a trade surplus with the United States over the past two decades, with the surplus widening in FY 2018 at a little over $21 billion in India’s favour. In 2019-2020, the trade surplus was slightly over $17 billion. The surplus is not just in the trade of goods but also in services, with India accounting for almost 5 per cent of USA’s services global imports.

With Biden-Harris, it is expected that there will be a move away from protectionist policies of Trump, and India may recover from the trade surplus dip since 2017-18. India has earlier received a first-hand experience of Trump’s ‘America First’ trade policies in March 2018, when the US imposed import duties on steel and aluminium at 25 per cent and 10 per cent, respectively.

There were rising US-China tensions on trade during the Trump regime, and this should have ideally signalled that the US would engage India as a counterbalance, but during the Trump administration, there wasn’t much action in that direction. The Biden-Harris duo is expected to overturn such policies and restore positive trade with India.

In Feb 2020, India was removed from the US GSP program which had permitted zero-tariff on over $6 billion worth of exports to the US.  Though there was a limited US-India trade pact in the works, it couldn’t take off because of the presidential polls.

It needs to be seen if the bilateral trade deal that was stalled ahead of the elections will be resumed in the second half of 2021 or not. The deal was earlier likely to cover goods trade worth $13 billion annually. India has been seeking restoration of duty-free benefits under GSP for its exports.

There are views that because of the Democrat preference for multilateral agreements over bilateral ones, the Biden administration may be more disposed to include India in the Trans-Pacific Partnership or TPP. Both India and the US are not part of the agreement at present, while the Regional Comprehensive Economic Partnership or RCEP, also doesn’t include India or the US. It needs to be seen whether India will seek to join a multilateral trade pact as it prefers bilateral agreements that will protect Indian manufacturers’ interests.

According to Care Ratings, in a report titled ‘US Elections and India’, a Biden presidency will work, “albeit marginally” in favour of India. Commentators say the Biden-Harris administration will take a multilateral approach on the trade front, and will move away from the Republicans protectionist stance, thereby underlining the possibility of enhancing trade relations with several other countries, including India.

With the economic sanctions on Iran that the US imposed, India has not been able to import oil from Iran since 2019. Following Biden’s presidency, India may hope to resume crude oil imports.

Further, there is the question of H1B visas. Days before the end of the Trump administration, the US has brought in many rules that have posed challenges to the Indian IT industry. It needs to be seen if the new administration will relax or overturn some of the visa rules.

As president-elect, Biden has outlined a $1.9 trillion package called the ‘American Rescue Plan’ it needs to be seen if the new administration succeeds in aiding economic recovery. The resurgent US can only bring good tidings for India and the rest of the world as well.

As Biden-Harris takes over the reins in the US, India may benefit from liberal trade policies and relaxed visa rules, a move away from the Trump administration’s protectionism.