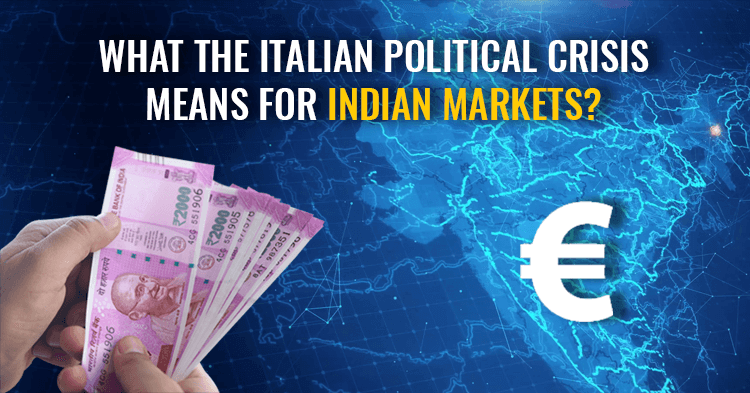 The best gauge of economic worries in any country is the bond yields. When bond yields move up sharply in a very short time, then it is a signal that the country is going to print a lot more of currency and that is going to lead to higher inflation. US bond yields are up on expectations of higher inflation. So also, bond yields in Brazil, Turkey and India are up because inflation is expected to be elevated in all these economies. But then Italy is a different ball game altogether. Since Italy is a member of the common currency (The Euro) it cannot really print Euros on its own. Only the European Central Bank can do that! Then why are Italian bond yields rising. Look at the chart below: 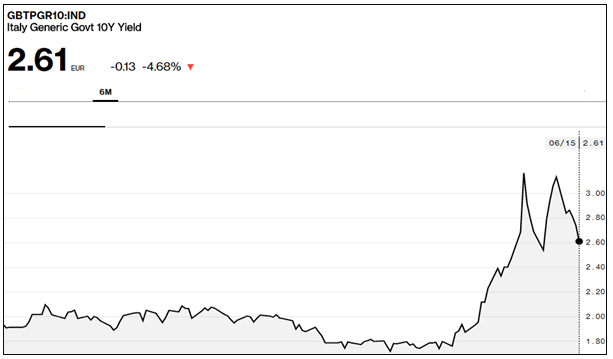 The 6-month chart of Italian bond yields clearly indicates that the yield shot up from 1.6% to above 3% before settling at around 2.61%. Obviously, since Italy cannot print currency, the only reason appears to be that markets perceive a risk of default on debt by Italy. To actually understand this risk, one needs to get a political perspective too.

How politics created the crisis in Italy

In the Italian elections held in March 2018, the Five Star and the League (two Italian political parties) jointly got a majority. While their philosophies are vastly different, they agreed to get together to form a coalition government. The problem arose with the choice of the finance minister. Both the Five Star and the League preferred Mr. Paolo Savona (an anti-Euro economist), as the finance minister. Markets were worried as it was well know that Savona wanted to get Italy out of the common currency. Savona had always believed that the Euro was heavily loaded in favour of Germany and against countries like Italy. To prevent a crisis, the appointment of Savona was blocked by the Italian President, Sergio Mattarella, under powers given to him by the Italian constitutions. This led to virtual collapse of the coalition since the choice of finance minister was non-negotiable for both the members of the coalition. In fact, Mattarella has called upon the administration to be taken over by an IMF economist till the time fresh elections are held and a new government is in place.

What does the Italian crisis mean for world financial markets and for India?

What is the bottom line?

How big could the Italian crisis be? Based on data, it does not look like anything close to what it was in 2011 and 2012. Back then, the Italian bond yields had gone above the 7% mark and that was almost indicative of an imminent default by the PIIGS economies. This time around, the yields are still at the 2.61% mark. Despite the changing political equations, the risks of Italy jumping out of the Euro are fairly remote. Most people across the EU region realize that stability is their best bet and that is only possible if Italy remains the Euro for now. That should be good news for emerging markets (EM) like India, who is the most vulnerable in the event of risk-off flows.