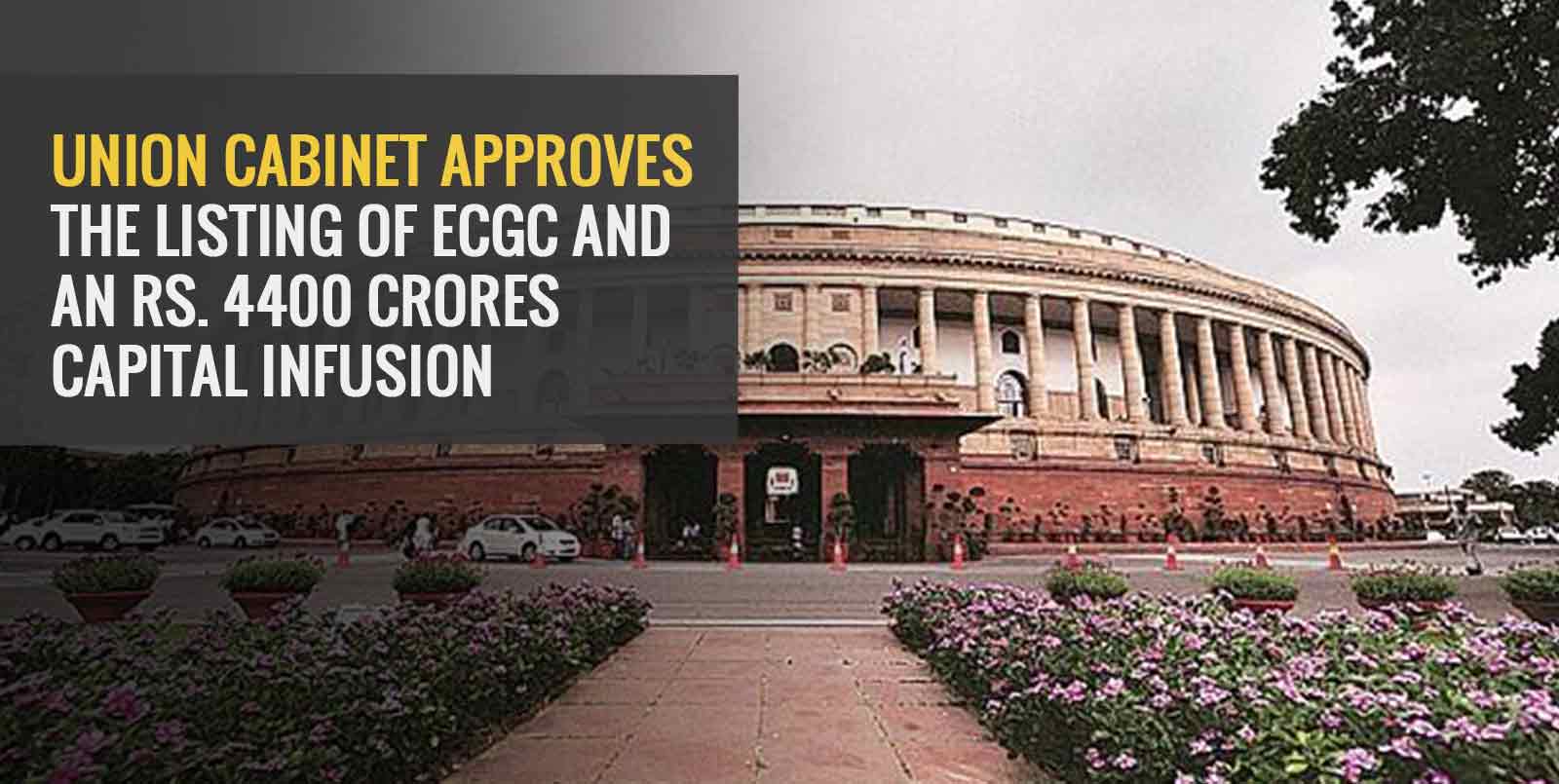 On Wednesday, 29 September 2021, the Union Cabinet approved Rs. 4,400 crores of capital infusion in ECGC Ltd over five years. It also approved the listing of this public sector undertaking through an IPO.

With this, the Government expects to increase exports by Rs. 5.28 lakh crores over the next five years and enhance ECGC’s underwriting capacity up to Rs. 88,000 crores. In addition, the stock market listing would let this company mobilise fresh capital from the market to increase maximum liability cover.

The Cabinet also added that this increase in exports would help create 5.9 million new jobs, of which 2,60,000 would be in the formal sector.

Take a look at the specifics of this company and why it is receiving Government funding.

ECGC is a central government body that works as an insurer providing credit guarantees for export payments. It was established in 1957 in Mumbai to protect exporters financially against default risks from overseas buyers. This government-owned body helps to facilitate trade financing and other export-related services.

ECGC also offers insurance cover to banks and other financial institutions against credit lending risk to exporters and offers credit ratings. Additionally, it plays an important role in supporting bank lending to small exporters and exports from labour-intensive sectors.

Today, ECGC is the 5th largest credit insurance agency dealing with exports. It is a market leader in export credit insurance in India, having 85% of the market share. In FY2021, this company supported Rs. 6.02 trillion worth of exports, amounting to 28% of India’s merchandise exports.

ECGC has insured around half of all export credit loans given by financial institutions, including 10 private and 12 public sector banks. The company has settled claims of more than Rs. 7500 crores over this decade and has invested $11.7 million in Africa Trade Insurance, encouraging Indian exports to the continent.

More than 7,300 distinct exporters have benefitted from ECGC’s Export Credit Insurance, 97% of which were small exporters.

According to the Commerce and Industry Minister Piyush Goyal, India intends to have an ecosystem that boosts exports. That is why the Union Cabinet has approved capital infusion to ECGC and NEIA and made plans to list this export insurer on stock exchanges.

The Cabinet has decided to continue the NEIA (National Export Insurance Account) scheme and invest capital of Rs. 1650 crores in it. This is expected to support project exports worth up to Rs. 33,000 crores. It will further create around 260,000 new jobs, including 12,000 in the formal sector.

The corpus distribution of Rs. 1650 crores will let NEIA support project exports of up to Rs. 33,000 crores at full capacity. This could result in an estimated output of Rs. 25,000 crores worth of domestically manufactured goods.

The capital infusion in ECGC will also take a period of five years. The Government will infuse Rs. 500 crores immediately and another Rs. 500 crores in FY23. This will help to increase its maximum liabilities to Rs. 2.03 lakh crores from Rs. 1 lakh crore by 2025-26, boosting the country’s exports.

With the company regularly generating profits for the past three years and paying dividends, the listing will likely let it mobilise considerable capital. The Government will use the proceeds of this fund to finance several social sector schemes.

The Government intends to boost exports considerably by providing more credit guarantee to exporters. India’s merchandise goods exports stood at $185 billion as of 21 September 2021. With the above measures, the Government hopes to close at $195 billion by the end of the half-year.

However, shipping rates and container availability have to be favourable for this to happen.

ECGC offers a wide array of credit risk insurance policies for Indian exporters against loss from exports. It also provides Overseas Investment Insurance to companies investing in Joint Ventures and Export Credit Insurance covers for banks and other financial institutions.

Depending on the type of insurance policy, ECGC offers the following guarantees:

The company’s chairman expects that the listing process will be completed by the last quarter of FY23. We will know about the particulars of the IPO once ECGC files the draft red herring prospectus (DRHP) with SEBI.