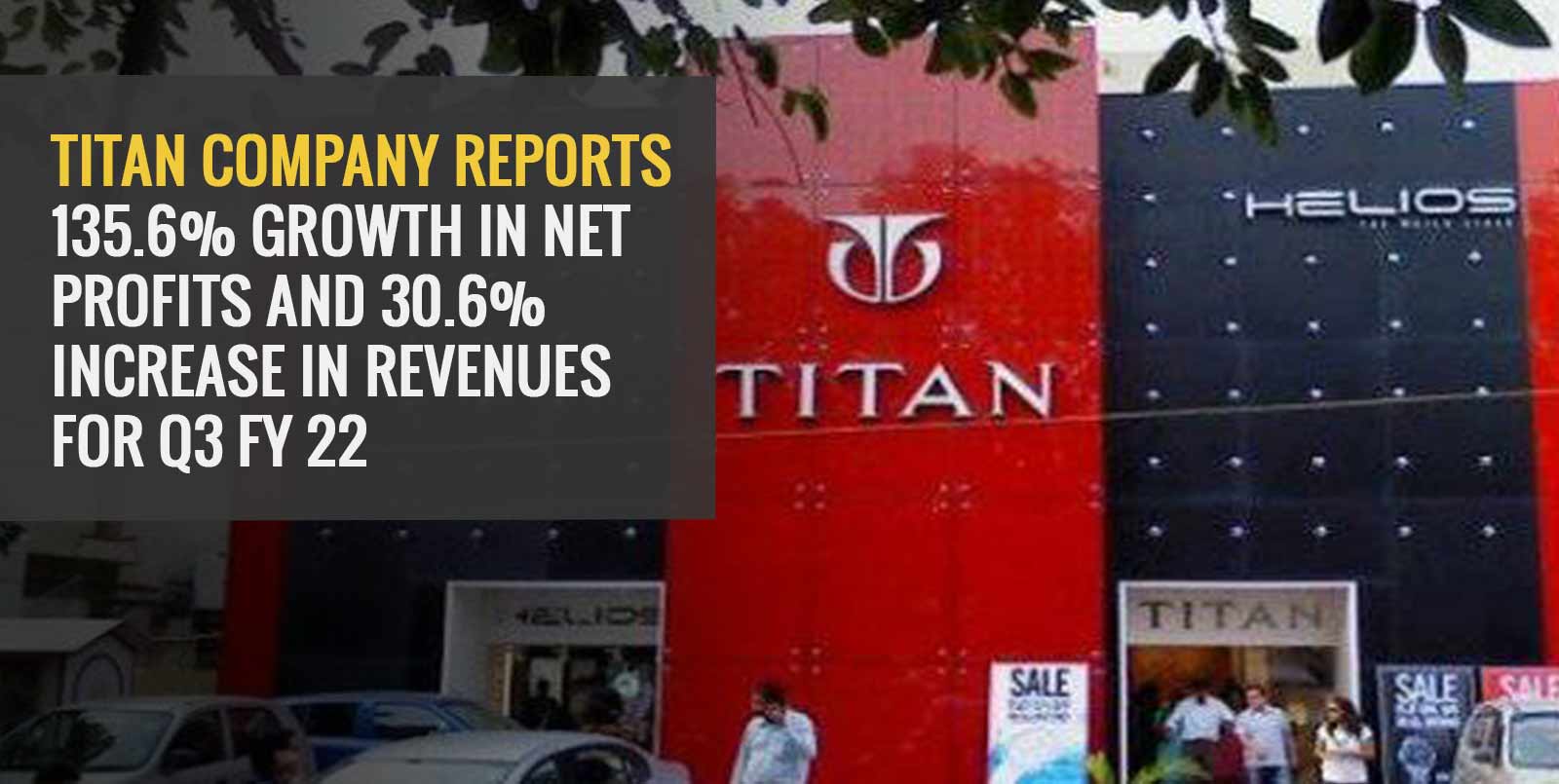 Tata Group’s Titan Company Limited reported a 135.6% growth in standalone net profits for the third quarter of FY 21-22 from the previous fiscal. Its profit has grown to Rs. 987 crores considerably higher than analysts’ estimates at Rs. 847 crores.

The company’s jewellery segment under Tanishq contributed most to its revenues and profit. The following sections will cover the details of this company’s profits.

The Titan Company was established in 1984 as a partnership between Tamil Nadu Industrial Corporation and the Tata Group. Today, it is the world’s fifth-largest wristwatch maker and India’s largest watch manufacturer.

It also offers watches under popular international names like Xylys, Tommy Hilfiger, FCUK and Timberland & Police. The company has sold over 150 million watches, exporting to over 32 countries.

Since its start as Titan Watches Limited, the company transformed the watch manufacturing and jewellery business of India. It set up its first integrated watchmaking facility in 1987 at Hosur, Tamil Nadu. In 1995, it set up its Tanishq brand to capitalise on the fragmented jewellery market.

The Titan Company launched its affordable wristwatch brand Sonata in 1998. In 2003, it diversified into fashion and prescription eyewear with its Fastrack Eye-Gear. It launched its second jewellery brand Gold Plus for the mass market in 2005 and the ‘Swiss-made’ watch segment, Xylys, next year.

Over the years, Titan Company has established many retail stores across its watches, jewellery and eyewear business segments. As of its last quarterly update (on 21 December 2021), Titan Company has 1935 standalone stores. The company has 682 eyewear stores, 428 jewellery stores and 809 watches and wearable stores.

Since then, the Titan Company has completely recovered and witnessed strong growth over pre-pandemic levels. Festive purchases in October and November 2021 has driven the company’s income across jewellery, eyewear, watches, wearables, dress wear and accessories segments.

The following table describes this company’s financials for 3 month’s period (All figures in Rs. crores)

The festival quarter brought strong demand and revenues across Titan Company’s various business segments. During October-November 2021, the company saw more walk-ins and new customers at Tanishq, resulting in significant revenue uplift. The reopening of the economy after the second wave led to a record wedding season, which increased Titan’s sales.

As of its last annual report, Titan Company has 1909 stores with a total retail space of 2.5 million sq ft. It has over 7000 multi-brand watch outlets and 662 watch care centres.

Other than watches and jewellery, Titan Company offers eyewear under the brands – Titan Eyeplus, Glares and Fastrack and international brands like Levi’s, Esprit and Hugo Boss. It also offers fragrances under its SKINN brand and Indian dress wear (sarees) under Taneira.