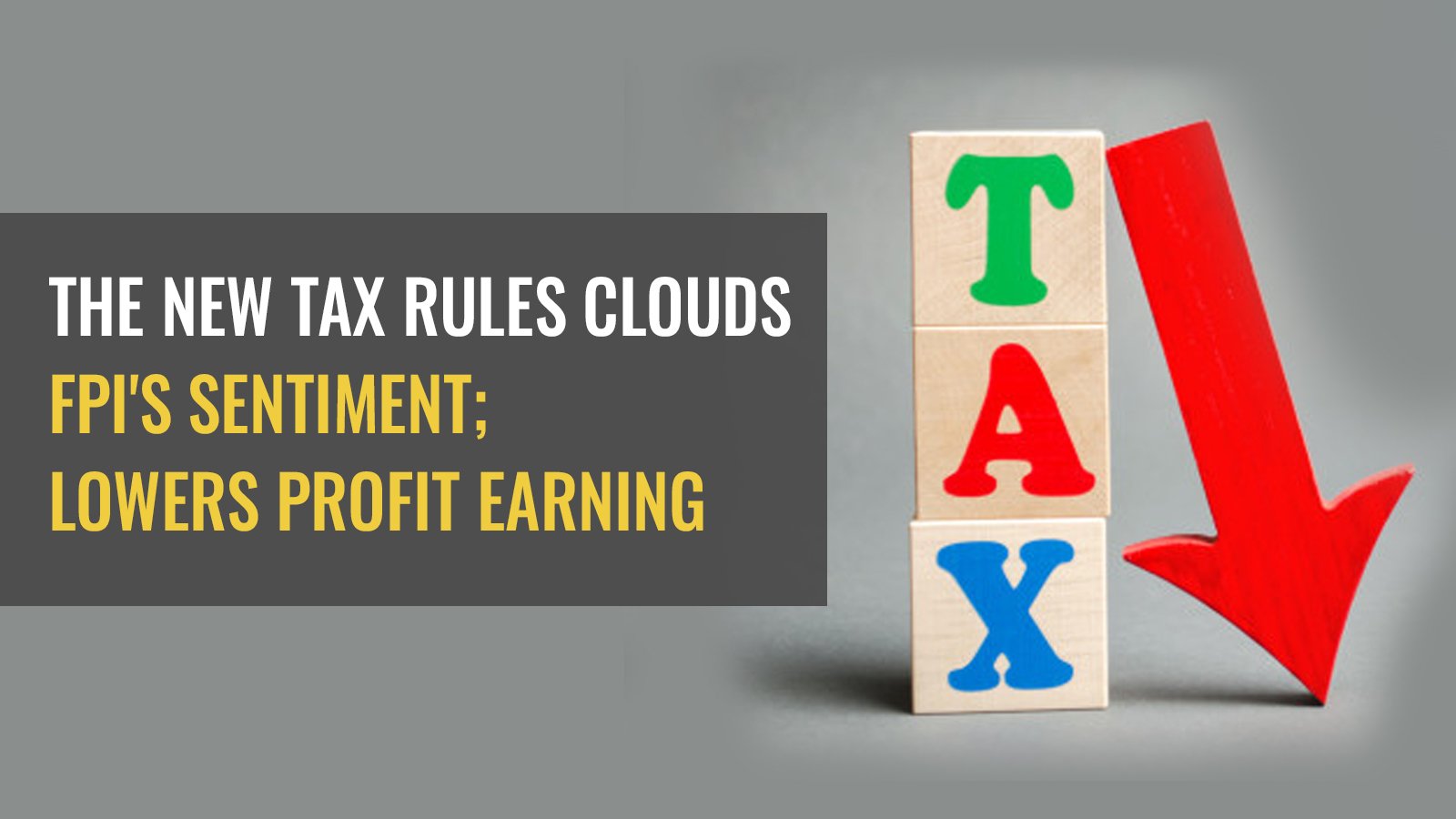 Under the new tax rules proposed by the government, FPIs (foreign portfolio investors) may be subject to up to 43 percent tax on the dividend earned from listed Indian companies. It will be levied on investors and entities that aren’t taxed in their original country.

Currently, a 20 percent flat tax is deducted at the source by the company. It didn’t impact the earning at the hand of the investor. But with the changes in the tax laws, dividend at the hand of the FPI will be taxed. It sparked fresh tax concerns for FPIs, who were lobbying with the finance ministry to avail exemptions.

New tax rules will apply to all FPIs which don’t qualify under Double Tax Avoidance Agreements (DTAAs). DTAA offers an exemption to foreign investors that are taxed in their home country. But in India, more than 50 percent international portfolio investors are either trusts or Association of Person or AOPs, which don’t come under tax purview in countries like USA, Singapore, Mauritius and Ireland.

In the simplest definition, FPI refers to stocks and securities held by foreign investors in another country. It allows companies to leverage funds in the international market. Portfolio investors don’t enjoy any ownership in the company but receive only dividends from the stocks.

FPIs are different from FDI, which stands for foreign direct investment. FPI refers to passive holding of stocks, shares and other financial vehicles with the expectation to receive returns from them. But FDIs allow investors to directly involve in company’s business process to generate a long-term income stream. As compared to FDIs, FPIs enjoy higher liquidity in the market. If they feel that returns on their portfolio are declining, they can sell their holding to secure investment capital.

What do the new tax norms mean to FPI investors

Currently, 40 percent of India’s FPIs are various trusts, and 10 percent are AOPs. Trusts aren’t considered taxable entities in their land of origin. Until now the tax was levied at company’s end. But in FY21 budget, Finance Minister proposed to change the slabs to make the tax system more progressive by increasing tax burden on super-rich tax-payers who earn more than two crores a year. It will increase the number of individuals and AOP tax-payers under the new tax rules.

However, under the new tax regime companies that qualify under DTAA are kept at bay. Even with 40 percent tax rate and surcharge, DTAA investors might have to pay as little as 5 to 10 percent tax. It ensures that DTAA entities aren’t liable to double taxation.

Discussing the topic of recent tax concerns for FPIs, Amit Singhania, a partner at Shardul Amarchand Mangaldas, said, – “FPIs structured such as trusts are considered transparent entities and the eligibility of tax treaty benefits either in the hands of trusts or investors is not straightforward. In case tax treaty benefits are not available, then the tax rate on dividend could be as high as 43 per cent.”

This is not the first time tax levels are modified. In 2019 also Federal government had increased surcharge on portfolio investors which was then opposed by international traders. This move might put a damper on FPIs soliciting for lowering tax rate with the finance ministry for four years. Finance Minister, Nirmala Sitharaman, however, has overruled any possibilities of rolling back tax decisions.

It will undoubtedly lower the income from investments for foreign investors. From April 1st, dividends declared and paid by the company will not be subjected to the existing 20 percent dividend distribution tax; instead, the tax will apply to the investors, including FPIs. It will also impact dividend repatriation policy since it demands foreign portfolio investors to clear taxes before they are allowed to transfer their income to their foreign account.