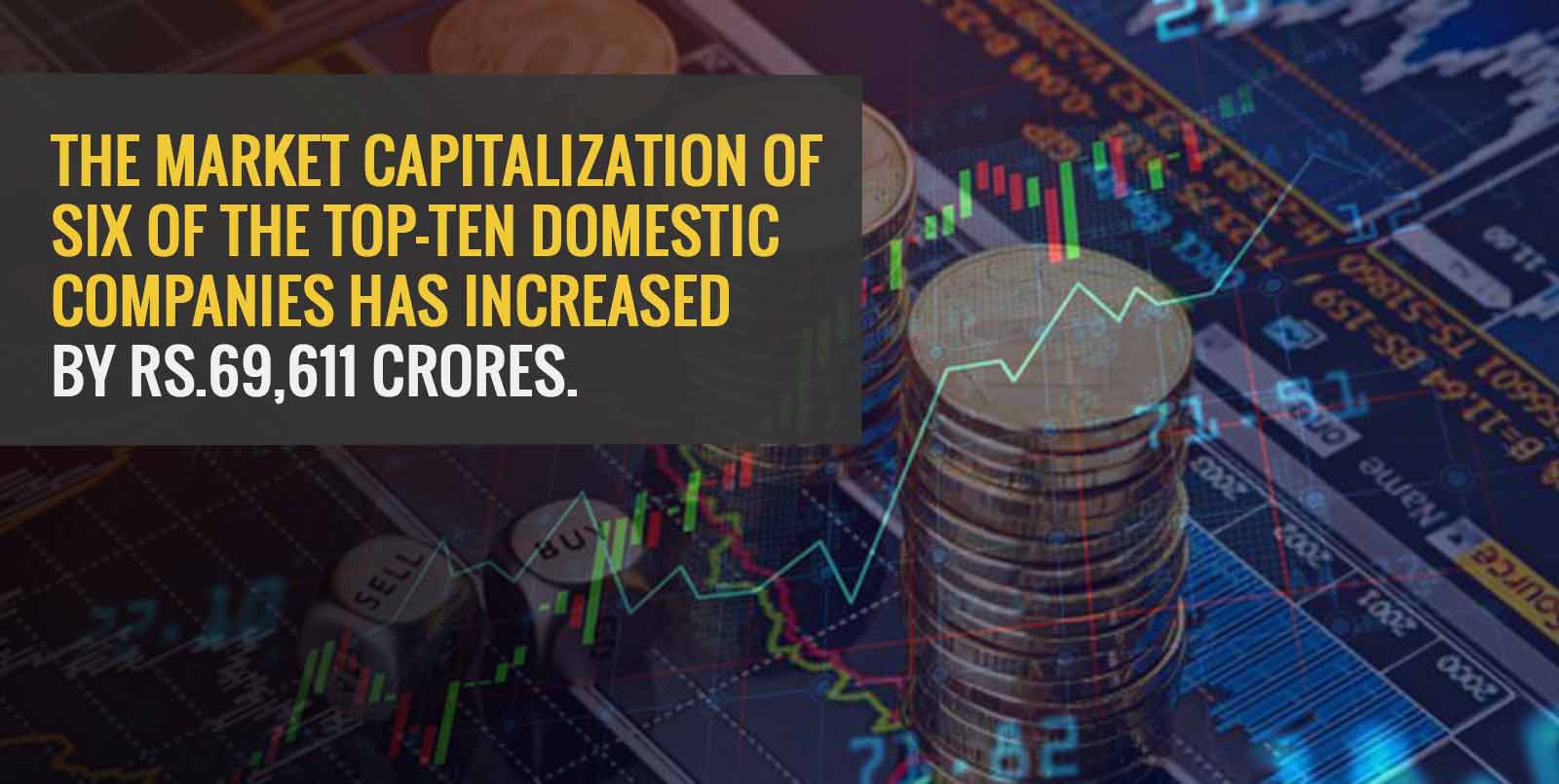 Last week, six of the ten most valuable domestic firms increased their market capitalization by a total of Rs. 69,611.59 crores, with Reliance Industries leading the gainers’ chart. Reliance Industries, HDFC Bank, State Bank of India, ICICI Bank, and Kotak Mahindra Bank were among the top-10 gainers, while Tata Consultancy Services, Infosys, and Bajaj Finance had their market capitalization decline.

What Exactly are Blue Chip Corporations?

By definition, blue-chip companies are those that have ‘Made it Big.’ Blue Chip stocks are those of a large, well-established, and financially strong corporation that has been in operation for a long time. A blue chip company’s stock has a market valuation of billions of dollars, usually the market leader or one of the top three corporations in its industry, and is more often than not a household name. The word is thought to have originated in poker, where the most valuable chips are blue.

Recognizing the Impact of Blue-Chip Companies on Market Fluctuations

Blue Chip Companies in India are considered the most stable equities to invest in, therefore feeling blue is excellent for stocks. Thousands of companies are listed on the Indian stock exchange. However, the vast majority of them do poorly. Blue chip firms are the greatest equities accessible on the market for long-term investors. And because the foundations of Blue Chip Companies are quite robust, it accounts for one of the best long-term saving vehicles. Stocks of blue chip companies can make money even in terrible times, therefore astute investors pay special attention to them. Because of the consistent returns and low price volatility in stocks, this choice is especially appealing to experienced investors. So, if you’re searching for a long-term value investment, check into blue chip stocks.

The stocks of blue chip companies have a long history of paying out dividends. Given the current economic climate, the fact that dividends are still being paid demonstrates the company’s confidence in its cash inflows. This assurance stems from the fact that these blue-chip corporations have developed a significant competitive advantage over their competitors. The blue chip investment is a highly preferred alternative for investors because of its competitive supremacy. While dividend payments are not required for a stock to be classified as a blue chip, most blue chip businesses have a track record of paying consistent or rising dividends for years, if not decades.

As we all know, investing in the stock market can be dangerous, but a successful investor knows how to manage risk so that his investments pay off handsomely in the long run while maintaining his wealth. Blue chip stocks can help to mitigate this danger. Blue chip stocks are not always purchased by value investors. This is why value investors pay close attention to the stock price swings of blue chip companies. They are waiting for prices to fall below the intrinsic value of the asset. Investing in blue chip firms’ stocks at cheap levels ensures excellent returns.

The Foundations of a Blue-Chip Corporation

Established Firm:An established company is defined as one that has been able to sustain or grow its EBITDA over time. This is when they have a competitive edge, which is necessary for a company to be recognised as a blue chip.

Strong Management:The report card of a strong management reads a lucrative balance sheet. A company’s profitability can be determined by looking at its margins.

PEG Ratio:Even shares of large multinational corporations will not attract investors if the pricing is incorrect. Before buying a company’s shares, look at its price/earnings-to-growth PEG ratio. Investors like a low PEG (less than one).