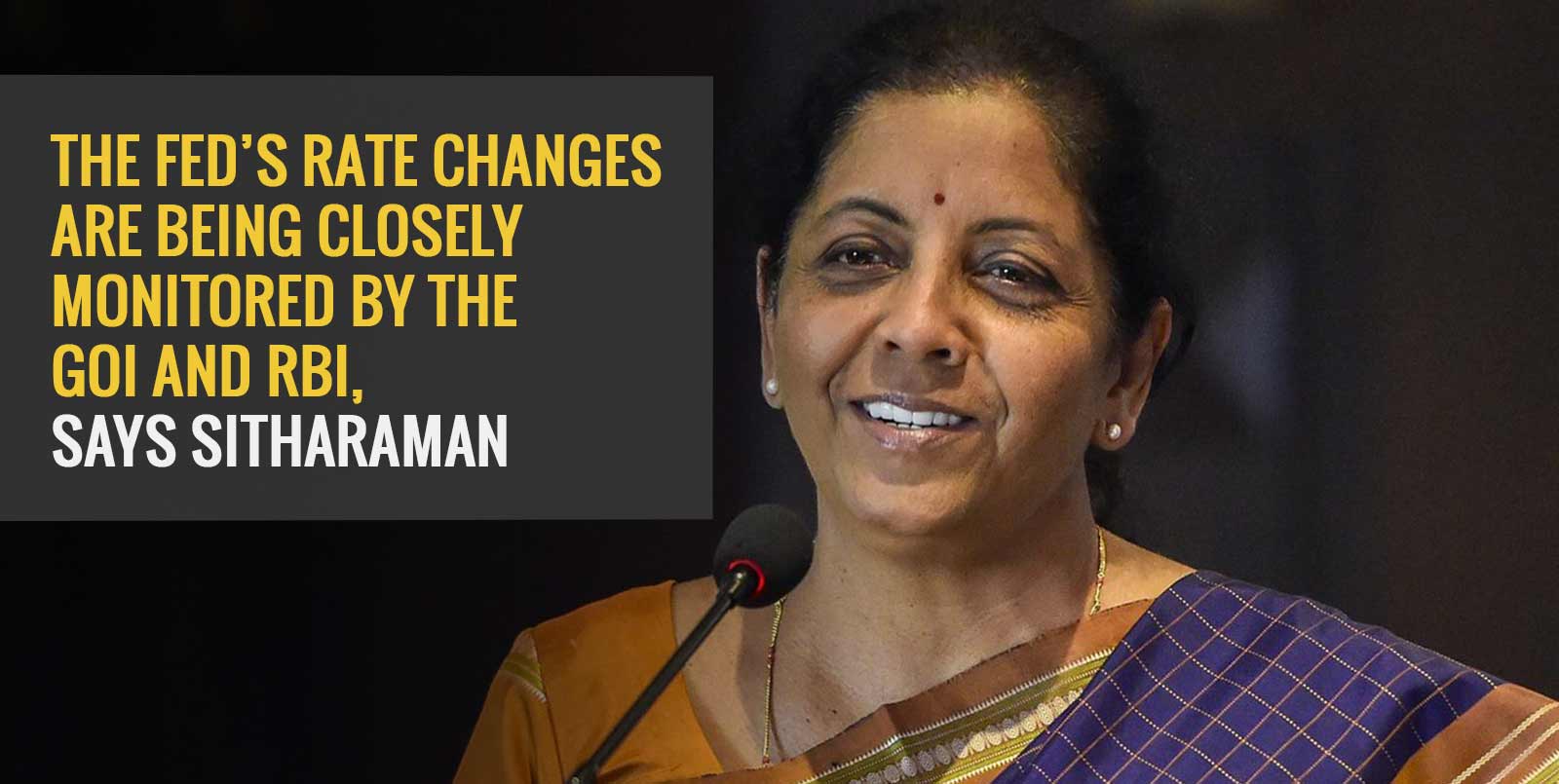 The government and the Reserve Bank of India (RBI) were closely monitoring the impact of the US Federal Reserve’s interest rate hike, although domestic inflation was not a major issue at the moment because supply chain issues were being tackled, according to finance minister Nirmala Sitharaman.

According to the finance minister, India was best suited for investors and corporations looking for alternatives to China in the aftermath of the country’s ongoing regulatory steps against domestic internet giants such as Alibaba.

When asked if the booming stock markets were out of step with the present economy, Sitharaman stated that the boom had lasted through last year and the pandemic second wave, and was “not a hiccup.” Sitharaman said in an exclusive interview that the government hasn’t said “no” to cryptocurrencies and is looking at how blockchain technology might help the finance sector.

The ongoing economic recovery would be aided by increased vaccine supply, she said, alluding to Monday’s record-breaking 8.8 million vaccinations. Furthermore, the finance minister stated in the wide-ranging interview that discussions on free trade agreements with the United States, the United Kingdom, and the European Union were progressing, and that the telecom department was looking into what could be done to assist ailing carriers.

When asked about reducing the rates and slabs of the goods and services tax, she said it could have to wait a while if one looked at it through the lens of the economy rebounding. However, the tax’s receipts suggested it was past time.

With Indian stock indices consistently reaching new highs, there has been much discussion about the impact of anticipated US tapering, possible overheating, and possible RBI intervention if inflation remains high.

Experts predict that the US Federal Reserve will begin tapering before the end of the year as the economy strengthens. She claimed that RBI had frequently intervened in the market to ensure a proper balance, to the point that US officials suspected RBI of tampering with the market and placed the country on a watchlist. The finance minister stated that she does not want to speculate on the global situation as a result of probable Fed choices. She said, “We’ll have to see how it goes.”

Getting rid of the retroactive tax

India’s ability to lure enterprises searching for alternatives to China, according to Sitharaman, is not just due to China’s crackdown on the tech sector. India was loosening regulations, but not to the point of becoming overly mercantile and against the people’s interests.

“As a result, those who desire to relocate, recognise the benefits of this type of progression. We combine the best of both worlds, and a healthy democracy, being what it is, has its own set of rules for pruning,” she continued. “I’ve heard some very powerful political thinkers and global business executives tell me that India now has it all, and we believe this is the ideal place to be,” she said.

The domestic stock market had continued through the second wave, and now the second half of 2021, according to the finance minister. “So it’s not a blip,” she said, adding that she wouldn’t put the economy’s uptick just on the stock market. “It’s a sign,” she explained.

Positive developments included the increased participation of retail investors in the stock market, as well as successful IPOs such as Zomato. “There’s a lot of optimism,” Sitharaman stated. She stated that the decision to eliminate the retroactive part of the income tax provision to tax indirect transactions was reached after multiple rounds of discussion.

“It wasn’t difficult, but it was exhausting… There were numerous meetings, including consultations with the Attorney General, ministry officials, and the law ministry. That is why I was unable to do so at the budget session,” she stated. According to Sitharaman, the government has taken care to guarantee that the sovereign government’s power to tax is not harmed as a result of the decision.

She stated that the government’s position on cryptocurrencies had not changed but that it was a large potential field in which a lot of global changes were taking place. “However, it is very dependent on cyber-based regulatory expertise, which our regulators require.” she added, adding that the government will need to act rapidly to address all of these issues. “We won’t say no to cryptocurrency, as I’ve already stated. We’re suggesting that we’ll have to explore how this technology will help fintech realise its full potential “she stated.

What is the Federal Reserve?

The Federal Reserve System, also known as the ‘Fed’ is the USA’s central banking system.

What effect does the Fed rate have?

Short-term loans, such as credit card debt and adjustable-rate mortgages, are affected by the fed funds rate, which, unlike traditional fixed-rate mortgages, have a floating interest rate that fluctuates monthly with the market.

What impact does the Fed have on the economy?

The federal funds target rate is a tool that the Fed utilises to stabilize financial growth. The Fed lowers the strike rate to boost the economy. When consumer prices rise too quickly (inflation), on the other side, the Fed raises the target rate, making money more expensive to borrow.