CPI inflation for the month of July 2017 came in almost 90 basis points higher at 2.36% compared to 1.46% in the month of June 2017. Of course, the July inflation is still sharply lower than the 6.07% recorded in July 2016 but at a time when the inflation is going through a structural shift, a YOY comparison may not really be relevant. As the inflation chart below depicts, this is for the first time since January 2017 that inflation has shown a sequential growth on a MOM basis. If there was one factor that pushed up inflation in the month of July, it was the prices of vegetables that went up sharply. Tomatoes hovering around Rs.100 KG were the perfect illustration of rising vegetable prices. 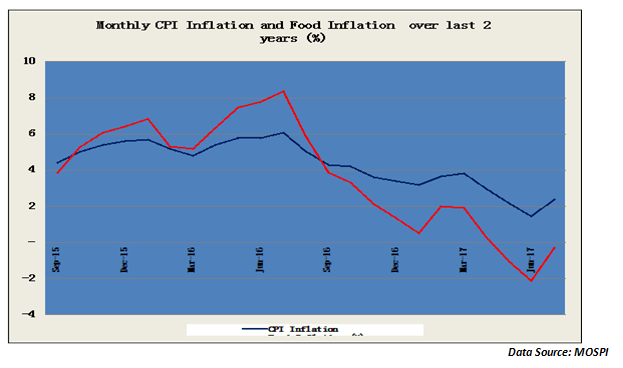 Food inflation had fallen below the -2% mark in the mark in the month of Jun 2017. For July it continues to remain in negative territory but is inching back to the zero mark. Food inflation bounced back from -2.12% to -0.29% and this bounce was largely led by inflation. In fact, the Monetary Policy Committee(MPC) while announcing the credit policy earlier in August had specifically highlighted the upside risks to food inflation. We are probably seeing the beginning of that trend as the base effect is gradually giving away. The government may be trying to maintain a delicate balance on food inflation. On the one hand, the record Kharif sowing in 2017 (4% higher than 2016) is likely to result in another bumper year. That has also meant that, despite good monsoons, farmers are worse off due to non-remunerative crop prices. The government may tweak Minimum Support Prices (MSP) more in favour of the farmers. So we expect food inflation to see upward pressure from here on.

There is an interesting observation on the rural / urban inflation comparison. When we look at overall inflation, the spread of rural inflation over urban inflation is just about 24 basis points while if you just focus on food inflation this spread is as wide as 108 basis points. This could be either interpreted as weaker distribution mechanisms in the rural areas or a signal of a pick-up in demand in rural areas. If the latter is the case, then we can assume that the impact of demonetization is finally weakening.

Breaking up food inflation and what it means for inflation trajectory… 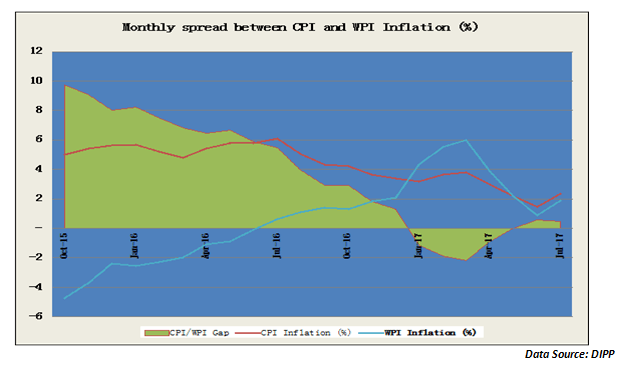 What has been the impact of GST on inflation?

Has GST actually pushed up inflation? Frankly, it is too early as we just have 1-month data after the launch of GST on July 01st. Globally; it has been observed that GST has had the tendency to stoke inflation by up to 200-300 basis points in the initial years. That is more because GST is a consumption tax and any disruption impact is almost felt immediately. According to economists, the contribution of GST to the July inflation is very minimal as the rise in inflation is driven more by vegetables inflation, which is anyways a zero-GST product. The inflation bounce in case of vegetables has been more an outcome of excess rains in producing regions leading to supply disruptions in the markets. While more data points may be required to judge the role of GST on inflation, prima facie it looks like the impact is likely to be minimal.

What does this mean for the RBI rate stance?

It may be recollected that in its August 2017 monetary policy the RBI had cut the repo rate by 25 basis points but had held on to its “Neutral” monetary stance. What this bounce in inflation means is that another rate cut looks unlikely in the October policy. The RBI has already indicated that further rate hikes will have to be preceded by a justification for the RBI to shift its stance back to “Accommodative”. That justification may not exist for the RBI.

With inflation moving up and the US due for its next rate hike as well as tapering of its bond portfolio, RBI may have reached the end of its rate cut cycle for 2017. The Fed has promised to start its tapering of the $4.6 trillion bond portfolio from September and that is likely to push up bond yields across the world. While it may be too early for Indian rate hawks, the inflation data suggests that RBI may be done with rate cuts for the current calendar.