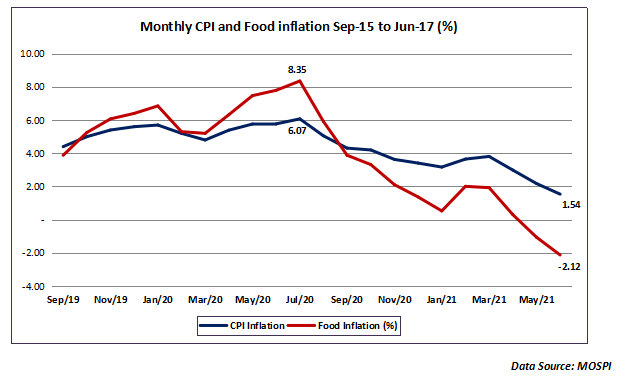 It all began with the bumper crop last year…

The story of falling inflation began with the robust monsoon and bumper Kharif output in 2016. With record production of pulses and overall Kharif output higher by 10%, there was a virtual glut of supply in the market. This has been largely instrumental in depressing food prices across India. Even for 2017, the early indications coming from the Met department are that the full season rainfall could be close to 98% of the long period average (LPA). The feedback coming from the Kharif sowing season in 2017 also indicates that there could be a record output of pulses this year too. With restrictions on exports and impediments in post harvest infrastructure, the weak prices of pulses are likely to continue this year too. That means overall inflation will continue to be tepid.

A break-up of the inflation data for June 2017…

For the month of June 2017, the CPI inflation came in at 1.54%. This is sharply lower than the 2.18% inflation touched in May 2017 and a substantially lower than 5.77% in the year ago period. The big shift in the last one year has been that the 100-150 bps gap between rural and inflation has now come down to nil. In fact, the sharp fall in rural inflation in the last one year (especially after November 2016) can be broadly attributed to the lag effects of demonetization. The real driver for lower inflation in the month of June was lower food inflation. In fact, food inflation dipped to a low of (-2.12%) in the month of June 2017 largely driven by negative inflation in pulses and vegetables. In fact, food inflation that used to be, at least, 200 bps higher than CPI inflation last year has almost dipped to a discount of 350 bps in June. While that is good from the overall inflation point of view, it also means that farmers are not getting remunerative prices for their produce. However, with the government revising the minimum support price (MSP) for most items recently, the impact on food inflation should be visible.

Key components of CPI inflation and how they fared…

The lower CPI inflation was largely driven by food inflation faltering on oversupply in the market. The two key items viz. Pulses and Vegetables continue to suffer from negative inflation. In fact, for the month of June 2017 pulses inflation came in at (-21.92%) while vegetable inflation came in at (-16.53%). Additionally, inflation in eggs and spices also dipped into negative territory during the month of June putting further pressure on overall retail inflation. As mentioned earlier, lower pulses inflation has been largely driven by a glut of supply after India produced record pulses output last year. This year also the Kharif sowing has been quite robust and we could again see record levels of pulses production putting further pressure on the prices of pulses. Cereals and milk products continued to maintain inflation levels at above 4%, but the negative inflation in four key components is making all the difference to the overall CPI inflation.

The non-food inflation items have all been around the 3-4% mark. But this could also trend lower as crude oil prices in the Brent market have trended towards the $45/bbl mark. That will mean lower landed cost of crude oil and therefore lower impact on non-food inflation, considering that oil has strong externalities.

What does lower CPI inflation mean for rates trajectory of RBI?

With inflation trending still lower, the question is whether it would induce the RBI to cut rates in their next August monetary policy review. While the MPC has surely indicated at a lower trajectory of inflation, they have not shifted their stance back from neutral to accommodative. Additionally, the MPC may still want to assess the impact of the GST, which was implemented effective July 01st, on the inflation number. It is expected that GST being a consumption tax could have the impact of pushing up inflation. However, with the benefit of input tax credit in-built into GST and most food items being in the 0-5% GST band, any substantially upside risks to inflation are unlikely.

The big question for the RBI will be the trajectory of global central banks as more central banks are talking about rates bottoming out and the need to taper the bond portfolio. With the 4 key central banks (US, UK, EU and Japan) holding nearly $14 trillion of bonds, any taper could have a cascading effect on global financial markets. Notwithstanding lower retail inflation, the RBI would be wary of this factor.

The immediate concern for the government would be mitigating the concerns of farmers who have been forced to take to the streets due to non-remunerative prices. That may be the big downside risk of low CPI inflation that the government will have to immediately contend with!