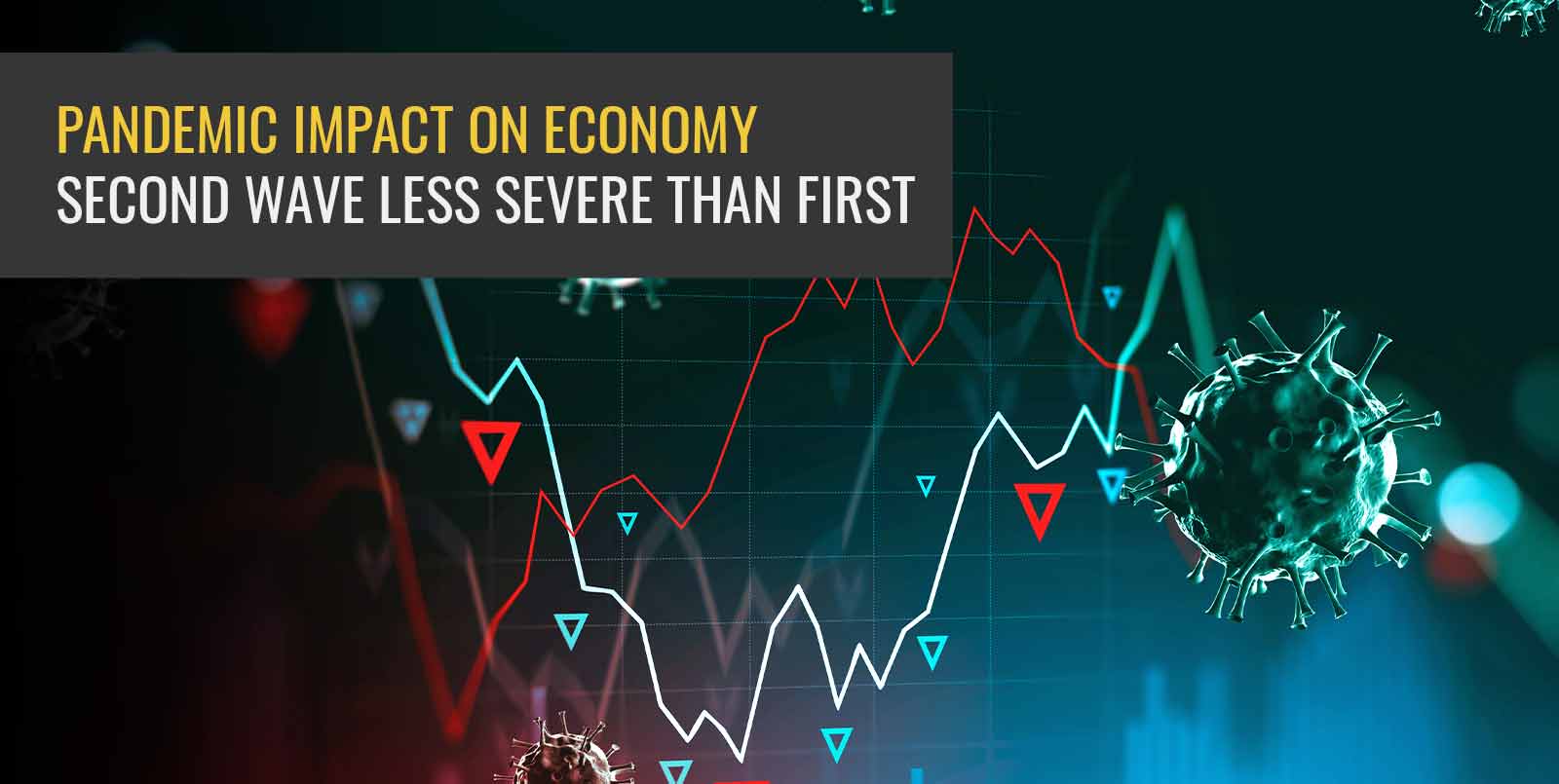 Ever since the Covid-19 pandemic broke out in India and the subsequent national lockdown imposed in March 2020, India has experienced a second and severe wave of the pandemic. The second wave has now all but receded, and several states and key cities in the country have begun unlocking activities. What has the economic impact of the two waves of the pandemic been like and is there a difference between the two waves?

On the GDP front

According to data from the government, the GDP for the fiscal year ended 2020-21 saw a 7.3-per cent contraction, which although lower than expected, was the severest such shrinkage in Independent India. The second wave of the pandemic, which started rising towards the end of March and the beginning of April, may lead to a loss of Rs 2 lakh crore in output for the current fiscal, according to the Reserve Bank of India. India’s central bank accounted for this loss of output when it cut GDP projections for the fiscal to 9.5 per cent from an earlier estimate of 10.5 per cent. Going by the first quarter GDP for the current discal, India’s economy was on the path of revival just before the second wave started to slow down economic activities in March, April and May. According to Moody’s, India’s real GDP is expected to grow nearly 9.6 per cent in 2021. Noting that the pace of recovery may be uneven, Moody’s projected real GDP growth of 7 per cent for 2022.

One of the highlights of the economy during the first wave of the pandemic was India’s rural economy. According to the National Statistical Office’s provisional data released on May 31 this year, the farm sector grew by 3.6 per cent at a time when there was a record contraction of the economy. India experienced a good monsoon in the year, contributing to a boom in agriculture. Also, agricultural activities were exempt from lockdowns in 2020, leading to a positive growth.

Further, employment under MGNREGA for 2020-21 saw a record 389.35 crore person-days of employment, bringing liquidity and boosting rural consumption. On the FMCG front, rural markets saw a 14.2 per cent growth in the October-December quarter of 2020, showing a resilient rural India.

The rural economy story in the second wave may be different. The second wave started to spread to rural areas at the beginning of the second wave. According to a report by the Centre for Science and Environment (CSE), more  than half of daily global cases were in India on six days in May, and these were because of a surge in rural districts.

On the agriculture front, the average wage growth for the agri sector during November 2020-March 2021 dropped to 2.9 per cent from 8.5 per cent in the April to August 2020, during the first wave of the pandemic.

India’s index of production (IIP) for April 2021 has shown a massive year-on-year growth of 134 per cent, on the back of the base effect following a huge 22 per cent contraction in output in April 2020. According to Nomura analysis, the month-on-month growth was 1.1 per cent (seasonally adjusted), which indicates that industrial output was not hit hard because of the second wave. Industrial production in April shows that localised lockdowns, restrictions with some exemptions, global demand and an economy that was prepared for another wave, have contributed to the resilience.

The RBI has said in its State of the Economy report in the June bulletin that even as India’s economy has been battling the second wave, there is a return of “cautious optimism”. The RBI noted that the impact of the second wave has been largely on the domestic demand front, adding that agriculture and contactless services have held on. It also noted that industrial production and exports have risen during the second wave. A normal monsoon is expected to get the economy going as well.

Meanwhile, the stock market has been largely indifferent to the second wave of the pandemic; in fact the benchmark index, Sensex, has been hitting fresh highs, breaching 52k levels. Even in mid-May, at the peak of the second wave, when the country reported over 3 lakh cases of fresh infections, the Sensex stayed resilient. The Sensex did drop 6.6 per cent in mid May from mid February 2021, in line with the Asia Pacific Index. However, it is much lower compared to the 23 per cent drop in Sensex in March 2020 when the pandemic started to take hold across the globe. In March 2020, during the early phase of the pandemic, the Sensex tanked to below 26k levels. Ten months later, it touched 50k levels, and has now been steadily above those levels.

While the first wave of the pandemic saw a nationwide lockdown and a contraction of the GDP by 7.3 per cent, the impact of the second wave on the economy is expected to be less severe. A lot depends on vaccination. The Finance Ministry has noted that vaccinating 700 million people with at least the first dose by September is the key to achieving herd immunity, which will lead to boosting economic growth. India reported a record 85 lakh plus vaccine doses in a single day. If this pace is sustained and herd immunity achieved, the impact of the second wave on India’s economy may be cushioned and will pave the way for speedier recovery.