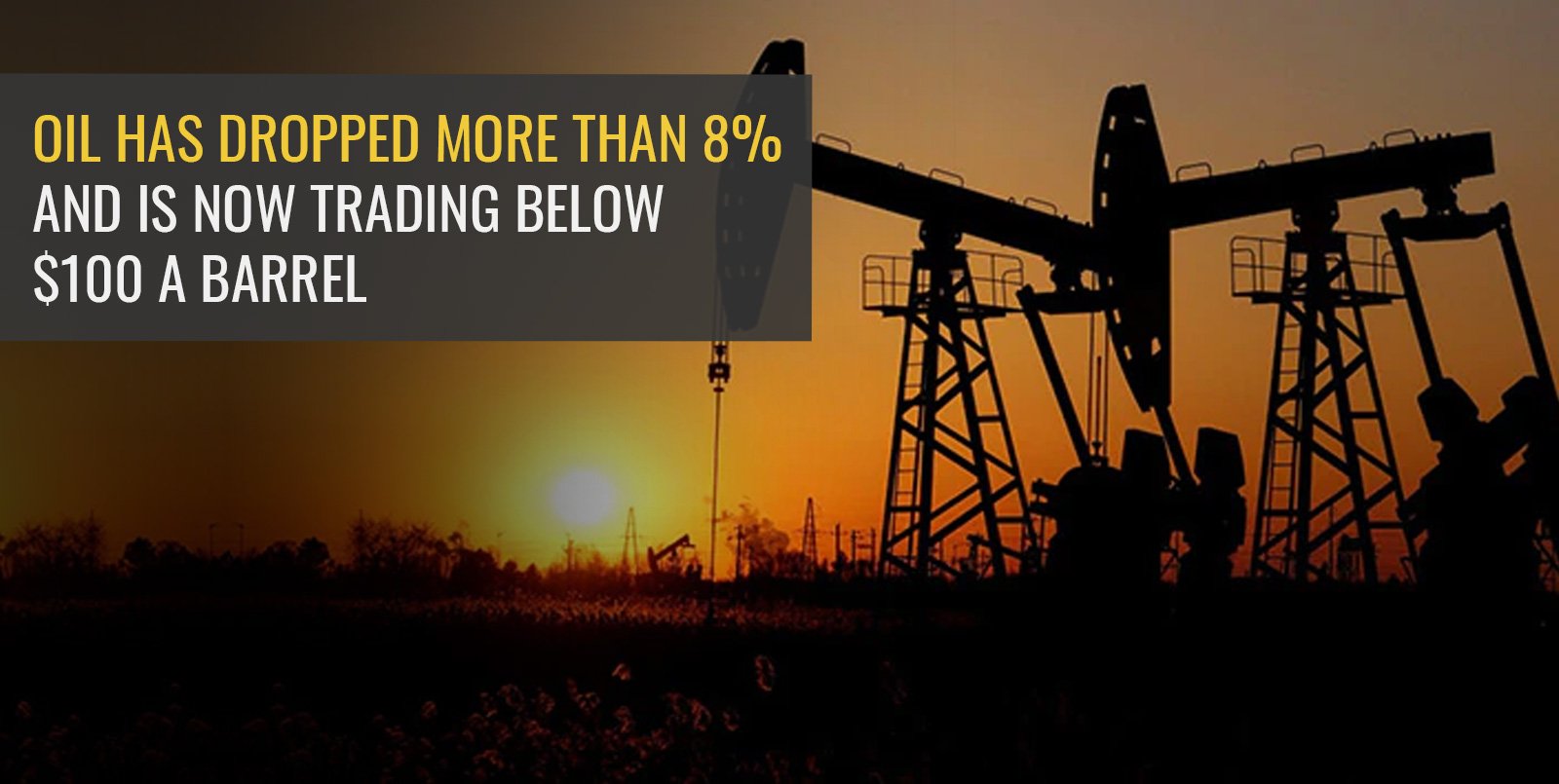 Oil prices fell more than 6% on Tuesday, to their lowest level in over three weeks, after Russia said it would enable the Iran nuclear agreement to be revived, and traders were concerned that China’s pandemic lockdowns would stifle demand.

For the first time since late February, both Brent and US oil futures benchmarks fell below $100 a barrel. Brent has lost about $40 and WTI has lost more than $30 since hitting 14-year highs on March 7. Since Russia invaded Ukraine more than two weeks ago, trading has been exceedingly turbulent.

Both futures have come the closest to oversold territory on technical charts since December. Early in March, they were in overbought circumstances. Brent reached a high of $139 per barrel at one time.

Russia is the world’s top crude and gasoline exporter. Since the invasion, many customers have eschewed Russian products, raising concerns of a disruption of millions of barrels of daily petroleum supplies. Those worries now seem to be exaggerated.

A Ukrainian negotiator said on Tuesday that discussions with Russia regarding a ceasefire and Russian army withdrawal from Ukraine are still underway. Prices fell as a result of the subsequent sell-off, but many people anticipate instability to continue.

“While news of positive conversations is to be welcomed, it is difficult to see how either side would be willing to make compromises that would be acceptable to any party at this time,” according to a Kpler research note. “It’s difficult to understand how crude oil prices aren’t underpriced in this circumstance.”

On Tuesday, Russia said it has written assurances that it will be able to carry out its obligations as a participant in the Iran nuclear agreement, implying that Moscow would enable the shattered 2015 accord to be resurrected.

The efforts to resurrect the nuclear agreement may result in the relaxation of sanctions against Iran’s oil industry, allowing Tehran to restart petroleum exports. They had come to a halt due to Russian demands.

Western sanctions have failed to discourage China and India from purchasing Russian oil as a result of Russia’s invasion, which it terms a “special operation.” Oil consumption in 2022 will be challenged by the invasion and growing inflation as crude prices rise, raising the risk of cutbacks to the Organization of Petroleum Exporting Countries’ prediction for solid demand this year.

China has seen a sharp increase in daily COVID-19 infections, which might impede consumption as the country transitions to lockdowns. “A severe lockdown in China might put 0.5 million BPD of oil consumption at danger,” said an expert. “This would be exacerbated by fuel shortages owing to increased energy costs.”

To combat surging inflation, the US Federal Reserve is generally anticipated to increase interest rates by 25 basis points on Wednesday for the first time in four years. This might increase the US currency, lowering demand for oil and other greenback-denominated commodities.

Price changes on a global scale

Since agreements are made in dollars, oil prices are mostly controlled by the price of crude oil and the dollar exchange rate. Russia is the world’s third-biggest oil exporter, and in reaction to Russia’s actions, several Western nations, such as the United States and Canada, have opted to restrict imports from the country. It indicates that demand for oil from other producers has risen, resulting in higher prices.

The United Kingdom buys just approximately 6% of its oil from Russia, therefore it is not as reliant on Russia for commodity supply as other European nations are, and it has said that it intends to phase down its reliance. It is, nevertheless, influenced by price changes across the world.