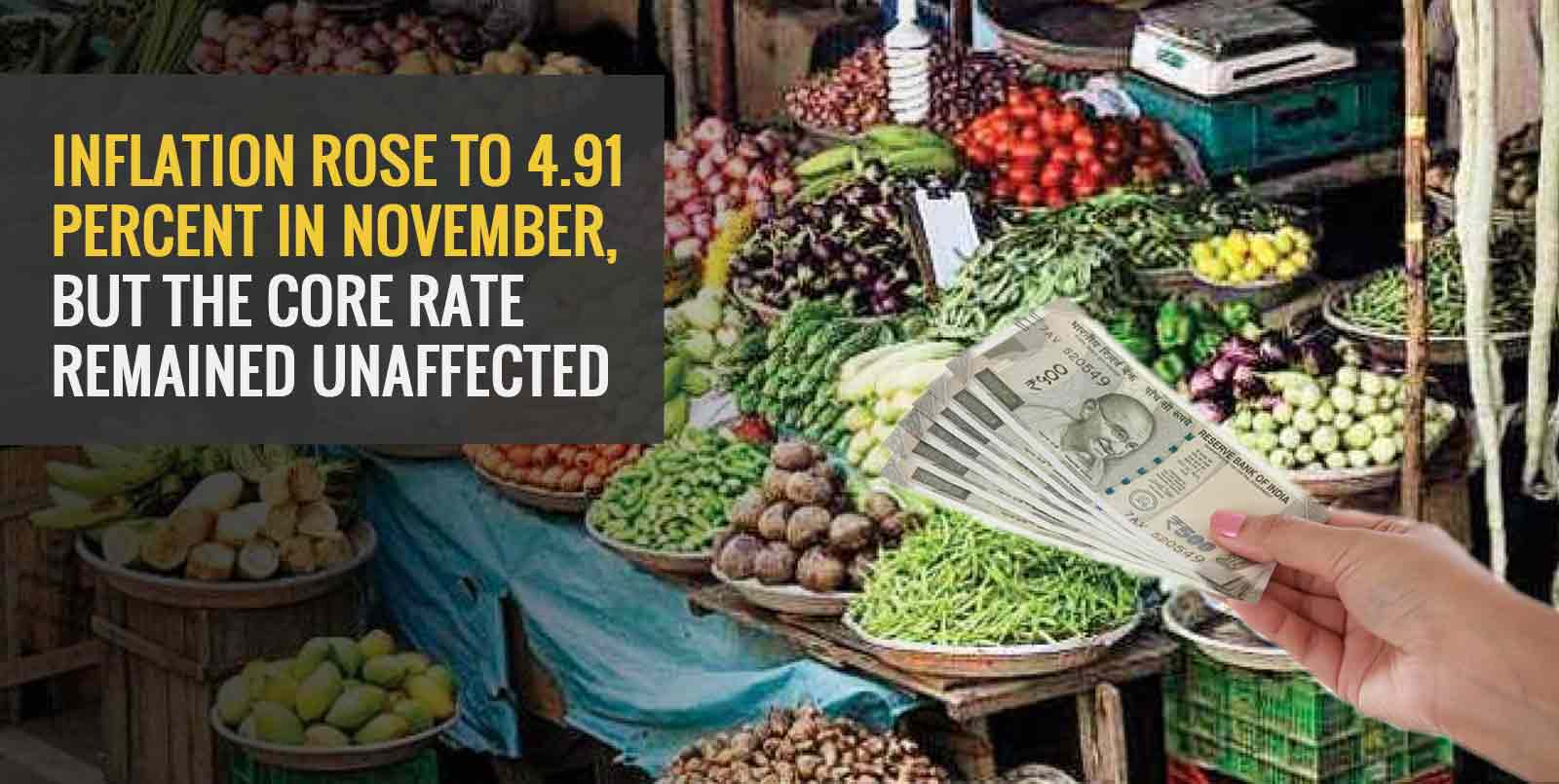 Headwinds from the outside continue to pose a threat. Global commodity prices are still high (although oil prices have dropped slightly), and the US Federal Reserve has begun to reduce its asset purchases. Despite a favourable base and petroleum tax decrease, retail inflation surged to a three-month high of 4.91 percent in November, as core inflation remained sticky and food price pressure reappeared.

The rise in inflation was essentially universal, implying that producers may have passed on the increase in input costs to consumers across a wide range of goods and services, notwithstanding supply-side constraints. Nonetheless, given that retail inflation remained within the Reserve Bank of India’s goal zone (2-6 percent) for the sixth month in a row, economists believe the monetary policy committee would keep pushing for development.

A rise in inflation in food and drinks, housing, and apparel and footwear more than offset easing price pressure in fuel and light,  tobacco and intoxicants, and miscellaneous commodities.

Despite a favourable base effect, inflation in food products, which account for approximately half of the inflation basket, increased to 1.87 percent in November from 0.85 percent in October. Importantly, core inflation remained high in November, at 5.9%, compared to 5.8% the previous month, according to ICRA.

“Cost-push pressures from high industrial raw material prices, transportation costs, and global logistics and supply chain constraints continue to impact core inflation,” the monetary policy committee admitted in a statement earlier this month. Of course, the economy’s slack is preventing increased input costs from being passed on to output prices. CPI inflation is expected to be 5.3 percent in 2021-22, with 5.1 percent in the third quarter and 5.7 percent in the fourth, with risks broadly balanced.

The MPC, on the other hand, predicted that price pressure in vegetables will ease as availability improves with the arrival of winter crops. Rabi sowing is also going well; the government has already reduced import levies on edible oil, and crude oil prices have dropped, according to the report. Meanwhile, following the Center’s and most states’ tax cuts, fuel and light inflation fell to 13.35 percent from 14.35 percent.

The second-round effects of the fuel tax reduction pulled down the transportation and communications sub-index by 60 basis points month over month in November. Other miscellaneous goods, on the other hand, saw a significant increase in month-on-month terms, ranging from 0.2 percent (for schooling) to 0.9 percent (for personal care and effects), highlighting the economy’s mounting price pressures, according to ICRA chief economist. “In my opinion, as long as CPI inflation is within the target range of 2-6 percent, the MPC and RBI will prioritise growth and retain policy support to ensure the recovery’s durability and longevity,” she added.

Inflationary pressure in commodities such as health, fuel and light, and transportation and communications has grown structurally. “Supply shortages are assisting in greater inflation, which cannot be classified as temporary,” experts stated. They predicted that retail inflation would continue high until January 2022, after which it will begin to decline.

“Though it should call for a shortening of the policy corridor,” they added, “the headline deficit, borrowing, and mathematics behind these data will be a primary guiding force behind the February 2022 MPC meeting.”

Q1. What is the root of inflation?

Inflation is the rate at which the price of goods and services in a given economy rises. Inflation occurs when prices rise as manufacturing expenses, such as raw materials and wages, rise. Inflation can result from an increase in demand for products and services, as people are ready to pay more for them.

Q2. Who benefits from inflation?

Inflation means that money loses its purchasing power and can buy fewer products than before. In essence, inflation will damage individuals who have cash reserves and those who have fixed wages. People with large debts will benefit from inflation since it will make it easier to repay their loans as prices rise.