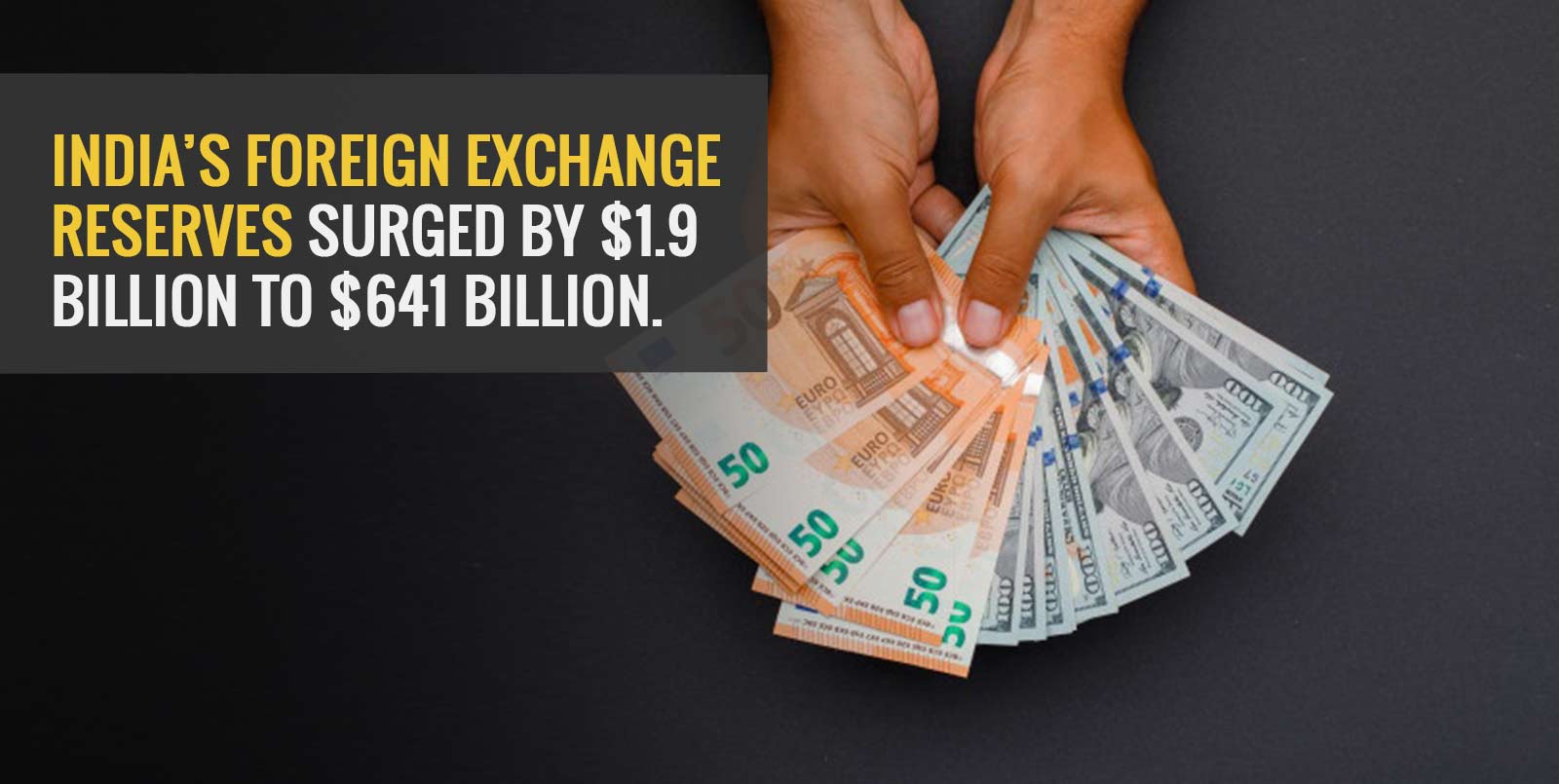 The Reserve Bank of India announced on Friday that India’s forex reserves climbed by USD 1.919 billion to USD 641 billion for the week ended October 29 due to robust growth in currency assets and gold value. At the end of the preceding reporting week, total reserves had dropped by USD 908 million to USD 640.1 billion.

The RBI said in its weekly data that foreign currency assets, which make up a large component of overall reserves, climbed by USD 1.9 billion to USD 641 billion for the reporting week.

The effect of appreciation or depreciation of non-US units held in foreign exchange reserves is included in the foreign currency assets when expressed in dollar terms. According to the data, the value of gold reserves climbed by USD 572 million to USD 39.012 billion in the reporting week.

Addition of 75 tonnes of gold in forex helps to resilience

The value of gold holdings, on the other hand, increased by only USD 960 million from a year ago to USD 37.389 billion in September this year. Gold prices, which had surged to Rs 56,000 per 10 grams last year, had since plummeted below the Rs 48,000 threshold, lowering the valuation.

The Reserve Bank of India’s gold holdings has surged by 125.6 tonnes in the last couple of years, making India the world’s 9th largest gold reserve holder.

According to the RBI’s Report on Management of Foreign Exchange Reserves, 451.54 metric tonnes of gold are held overseas in safe custody with the Bank of England and the Bank for International Settlements (BIS), whereas 292.30 tonnes are held locally.

Despite the fact that gold no longer plays a direct role in the international monetary system, central banks and governments continue to retain large gold reserves in order to secure national wealth and avoid economic instability. Gold is being bought by central banks at an ever-increasing rate. They bought more gold in 2018 than they have in any year since the termination of the gold standard, and they have been net buyers for 11 years.

Currency risk, interest rate risk, and gold price fluctuation, according to the RBI, are the main sources of market risk for central banks. Gains and losses on the valuation of FCA and gold owing to changes in exchange rates and/or the price of gold are recorded under the Currency and Gold Revaluation Account on the balance sheet. The CGRA balances act as a hedge against exchange rate and gold price changes.

Q1. What are foreign exchange reserves, and how do they work?

A central bank’s foreign exchange reserves are assets kept in foreign currencies. These reserves are utilised to back liabilities and exert monetary policy impact. Any foreign money owned by a central bank, such as the Federal Reserve Bank of the United States, is included.

Q2. What is the significance of foreign exchange reserves?

To maintain a fixed rate of exchange for their currencies. Forex reserves are used by countries with a variable exchange rate system to keep their currency’s value lower than the US Dollar.

Q3. How do you build up your foreign exchange reserves?

Trade in products and services, remittances from non-residents to resident households, repatriation income from investments, foreign direct investments (FDI), and portfolio investment all contribute to a country’s foreign exchange reserves growing in the regular run of things.