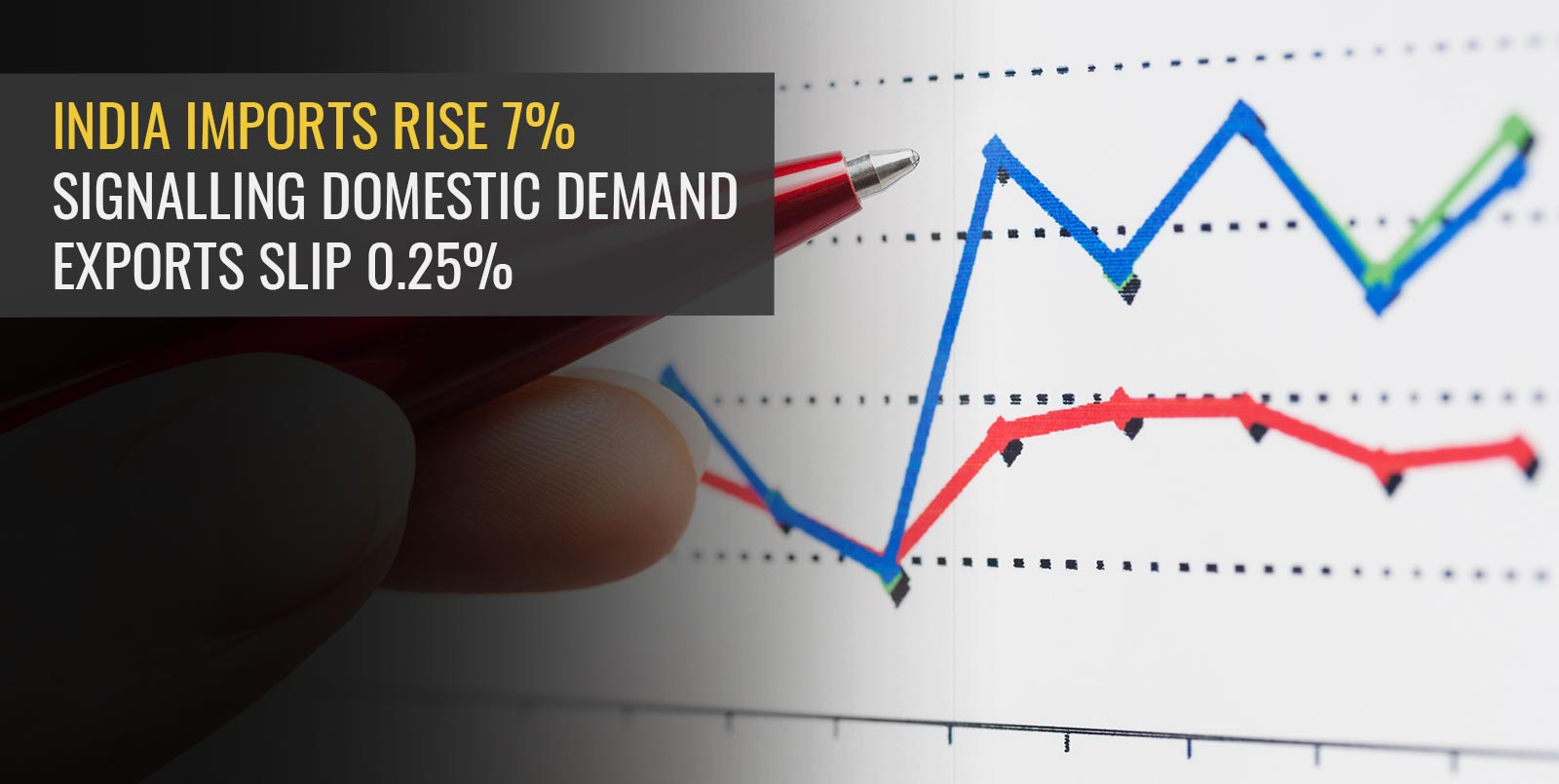 India’s exports have dropped marginally by 0.25 per cent to $27.67 billion in February as imports rose nearly 7 per cent to $40.55 billion, provisional data from the Ministry of Commerce and Industry shows.

This means that the trade deficit has widened to nearly $13 billion in the month gone by compared to $10.16 billion in the same period last year. In January 2021, the deficit was at $14.54 billion.

India’s exports had crashed following the coronavirus pandemic and subsequent lockdowns. In the April to December period in FY 2020-21, India’s merchandise exports had seen a contraction of 15.8 per cent and registered a little over $200 billion as compared to $238 billion during the same period in FY 2019-20. In the same period, imports too declined by a little over 29 per cent to $258 billion, compared to $364 billion in April-December 2019-20. Oil imports for the nine-month period dropped 44.46 per cent.

In November 2020, India’s exports shrunk 8.7 per cent and imports too contracted heavily at 13.3 per cent, leading to a 10-month peak trade deficit of nearly $10 billion, year on year. This was the time when the second wave of the pandemic hit some of the big European markets for India’s exports.

In January 2021, India’s exports stood at $27.45 billion, showing a positive increase of 6.16 per cent, according to the Ministry of Commerce. Exports had grown 0.14 per cent year on year in December. Imports in January 2021 also showed an increase of 2 per cent to nearly $42 billion, on the back of a steep rise in gold imports at 154.7 per cent.

The February 2021 data shows that core exports growth, barring petroleum, gems and jewellery, declined to 5.8 per cent from 13.4 per cent in January. The products that registered a growth in exports for the month were iron ore, rice and drugs and pharmaceuticals (168, 30 and 15 pc respectively).

The slight drop in India’s exports this month has been attributed to the container shortage crisis — more than 85 per cent of the world’s container production happens in China and India’s imports from that country had dropped for a period because of the pandemic and other political tensions between the two nations. In fact, reports suggest that India’s sugar exports are likely to drop by 12 per cent this year because of container shortage. India is the second-largest sugar producer in the world.

Trade deficit and what it means

A trade deficit happens when the value of a country’s imports are higher than exports. A trade surplus occurs when export value exceeds import value. India has shown a rise in import value, which signifies domestic demand, and is construed as a positive sign after the pandemic had impacted consumption and growth domestically.

Even though exports had increased over the past two months, the slight drop year on year in February 2021 means that while India is on the path to recovery, the journey is a bumpy one. Also, the drop in exports may suggest a lukewarm demand overseas. The export and import percentages over the last year depict the trajectory of the pandemic and the impact it has made on the economy. The marginal slippage in export value and the huge rise in import for February 2021 needs to be analysed in this context. It clearly shows an uptick in demand following a mammoth drop during the April-June period, albeit with many bumps along the way.

It may be recalled that India registered a trade surplus of $793 million in June and a surplus of $19.8 billion in the first quarter of FY 20-21. This surplus came on the back of a surplus of 0.1 per cent of the GDP in the earlier quarter, according to the RBI. Although a trade surplus looks like a positive development apparently, looking at the context in which the surplus was achieved shows that it was due to a sharp drop in demand. The decline in May 2020 imports was led by a huge slide in gold, coal and electronic imports, signalling a slowdown.

Export and import: A fine balance

While exports form the backbone of an economy, as they earn forex, ensure competitiveness and trigger employment, imports reflect domestic demand. A fine balance between the export and import value ensures that an economy is in good shape.

A trade deficit is not necessarily a negative development if the country involved in an economy that is growing and needs more input raw material and goods for production and manufacturing. When the input/raw materials are imported to expand domestic production and then eventually for exports, it leads to growth. A trade deficit in a growing economy can still keep the stock markets in positive territory.